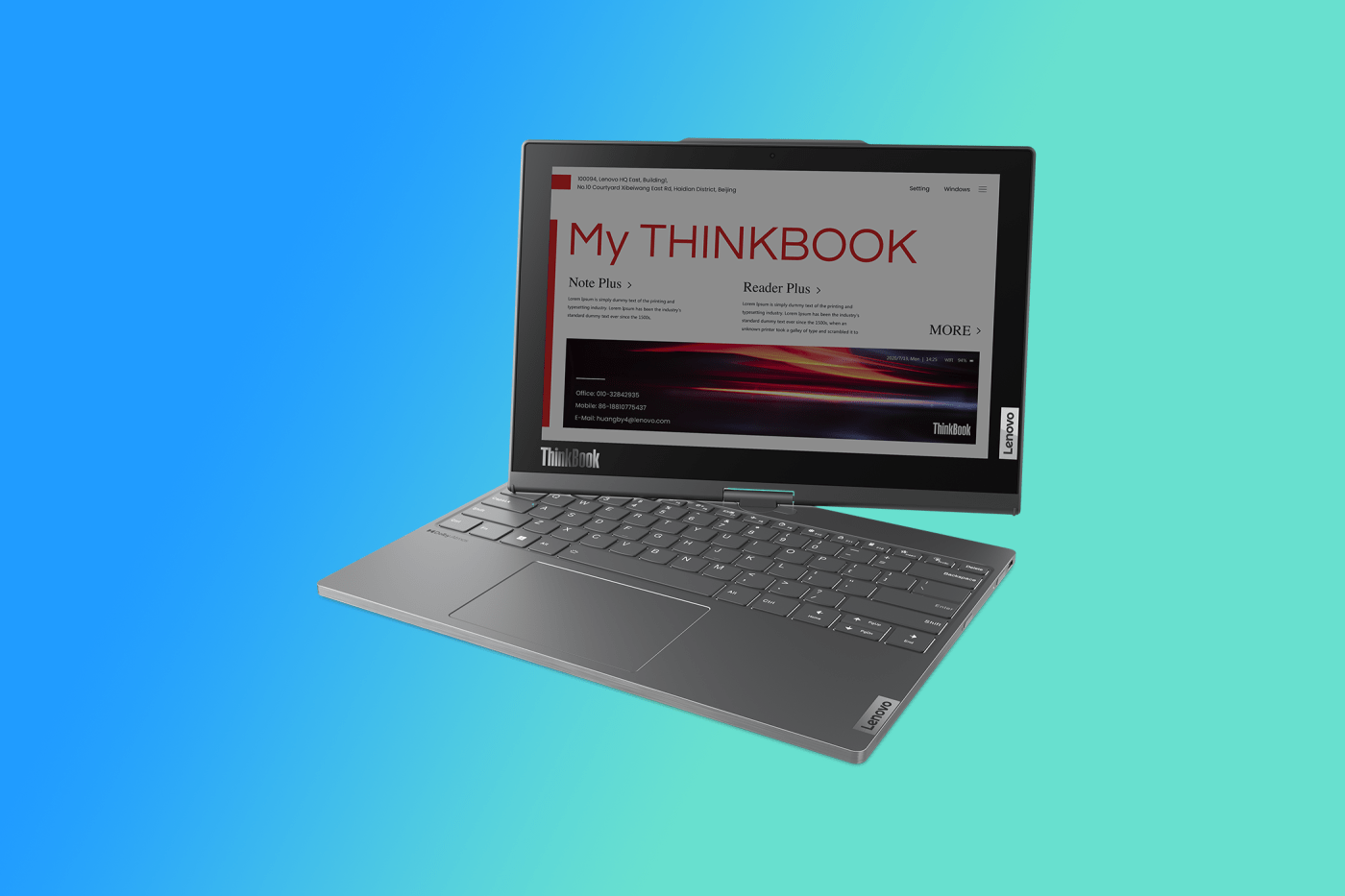 A laptop that twists, a 4K camera you can detach, and a dual-screen laptop with no trackpad - must be Lenovo at CES!

Lenovo is always good for a slew of announcements every CES, and CES 2023 is no different. The company is announcing a boatload of new devices, device upgrades, and accessories that will all be on display on the show floor. For this edition of CES Chronicles, I wanted to highlight a few of their announcements that came off as one thing: a little bit weird.

These aren’t experimental concepts or completely impractical products. Instead, they take what would be a normal consumer device experience and alter in some, frankly, weird ways.

The Yoga Book 9i is a prime example of this. I was speaking to one of the PR reps during a briefing to learn about the device, and I said that it was one of the main things I wanted to check out. He then said (and I’m paraphrasing here), “Yeah, because it’s kinda weird.”

And it’s exactly that. The Yoga Book 9i replaces the keyboard deck and trackpad with a second 13.3-inch 2.8K OLED display. This gets you two displays that you can use for just about anything you want, whether it’s running two apps side-by-side or letting content spill over. The keyboard is separate from the main unit and includes a folio-style stand so you can prop the Yoga Book up.

It’s sort of a more practical version of the ThinkPad X1 Fold, or at least that’s the impression it had on me when I played around with it. The hardware feels a lot less experimental and more like a product that’s been on the market for years, mostly because it’s just two screens stitched together by a 360-degree hinge.

Obviously, the Yoga Book 9i comes with all the latest specs like Intel’s 13th-gen processors, 16GB of RAM, and 1TB of storage. It ships in a really nice Tidal Teal color way and costs $2,099. That’s far from a low price, but it’s to be expected from a device with two identical OLED screens. It goes on sale in June.

On the other hand, the ThinkBook 16p Gen 4 is a perfectly normal-looking laptop, keyboard deck and all. It has a pretty standard design with an aluminum enclosure, a 16-inch 3.2K 120Hz display, and the latest Nvidia GeForce graphics. But there’s one feature that, yes, is a little weird: the Magic Bay.

It’s the little area at the top of the screen that houses the Full HD webcam and IR sensors for Windows Hello. On the back are magnetic pins that let you attach different accessories. At launch, Lenovo is offering a 4K webcam that can also record in the opposite direction, a 4G LTE access point, and an LED light for improved lighting during video calls.

The accessories are sold separately and range from about $20 to $250. I played around with them a bit and found that they work well. I asked a product specialist whether there were plans to create more modules in the future or expand them to other devices in Lenovo’s lineup, and he seemed to indicate that was a possibility, although it depends on how well the 16p Gen 4 is received.

The new ThinkBook will retail for $1,349 and launch in May.

Then there’s the ThinkBook Plus Twist, which is definitely one of the weirdest devices to come out of Lenovo in a few years. It’s not the first ThinkBook to ship with both a traditional laptop screen and an E-Ink screen on the back, but it is the first to let you swivel the displays around, hence the name “Twist.”

The main display is a 13.3-inch 2.8K OLED panel that looked very nice in-person, but the hallmark is the 12-inch color E-Ink screen strapped to its back. If you swivel it around, you can use it as your laptop’s primary display, which could be helpful if all you’re doing is reading some documents or light word processing. If you want to do more, Lenovo includes a special mode that increases the refresh rate and responsiveness. I tried it during my briefing and came away impressed, especially when I fired up a YouTube video and saw that it had no issue playing.

It’s obviously not a feature you’ll use all the time, but it’s nice that it’s there. Not only is it much easier on the eyes, but it can help save battery life, too. E-Ink screens are famous for powering device that can last for weeks on a charge, and if you’re able to maximize your usage with the E-Ink panel on the ThinkBook Plus Twist, you could notice some serious energy savings. Lenovo says the laptop can last up to 18 months on a full charge if you only use the E-Ink screen, so if you’re crazy enough to do that, you’ll probably never need to recharge.

Lenovo also lets you write on the E-Ink panel and manage all of your documents in a special interface. When you switch back to the OLED screen, you’ll have a standard Windows 11 laptop experience powered by Intel’s 13th-generation processors.

While on the subject of E-Ink, Lenovo is also announcing its new Smart Paper, a 10.3-inch E-Ink tablet meant for taking notes and reading on the go. It’s similar to Amazon’s Kindle Scribe in functionality, but it’s from Lenovo, so it’ll work a little differently.

It comes with a stylus that offers 23 millisecond latency and recharges in a dedicated silo on the side of the device. There are 4,096 levels of pressure in the pen and 74 different templates you can sketch on. You also have different pen styles to pick from like a pencil, ballpoint pen, or marker.

But of course, that’s not the reason to get this thing. It’s a lot smarter than just an E-Ink notepad.

Lenovo built a handful of microphones into the Smart Paper that lets you record conversations and take notes at the same time. The tablet can also help you retrace why you wrote down certain notes by playing back the audio that was recorded at the point in time you wrote the note. There’s 50GB of storage onboard so you’ll always have room, and each note can be uploaded using Lenovo’s Smart Paper app that can sync them to your Android iOS, or Windows device. You also get integration with eBooks.com for access to over two million e-books.

In my brief time with the Smart Paper, I liked how thin and lightweight it is, as well as the weight of the pen. Full disclosure: this is probably the most normal device in this “weird” lineup of gadgets, but I realized it’s an out-of-the-ordinary product for Lenovo to introduce, hence its inclusion on my list.

It’ll retail for $399.99 which is $70 more than the Kindle Scribe, but at least you get some extra functionality. Lenovo will start shipping it later this year.