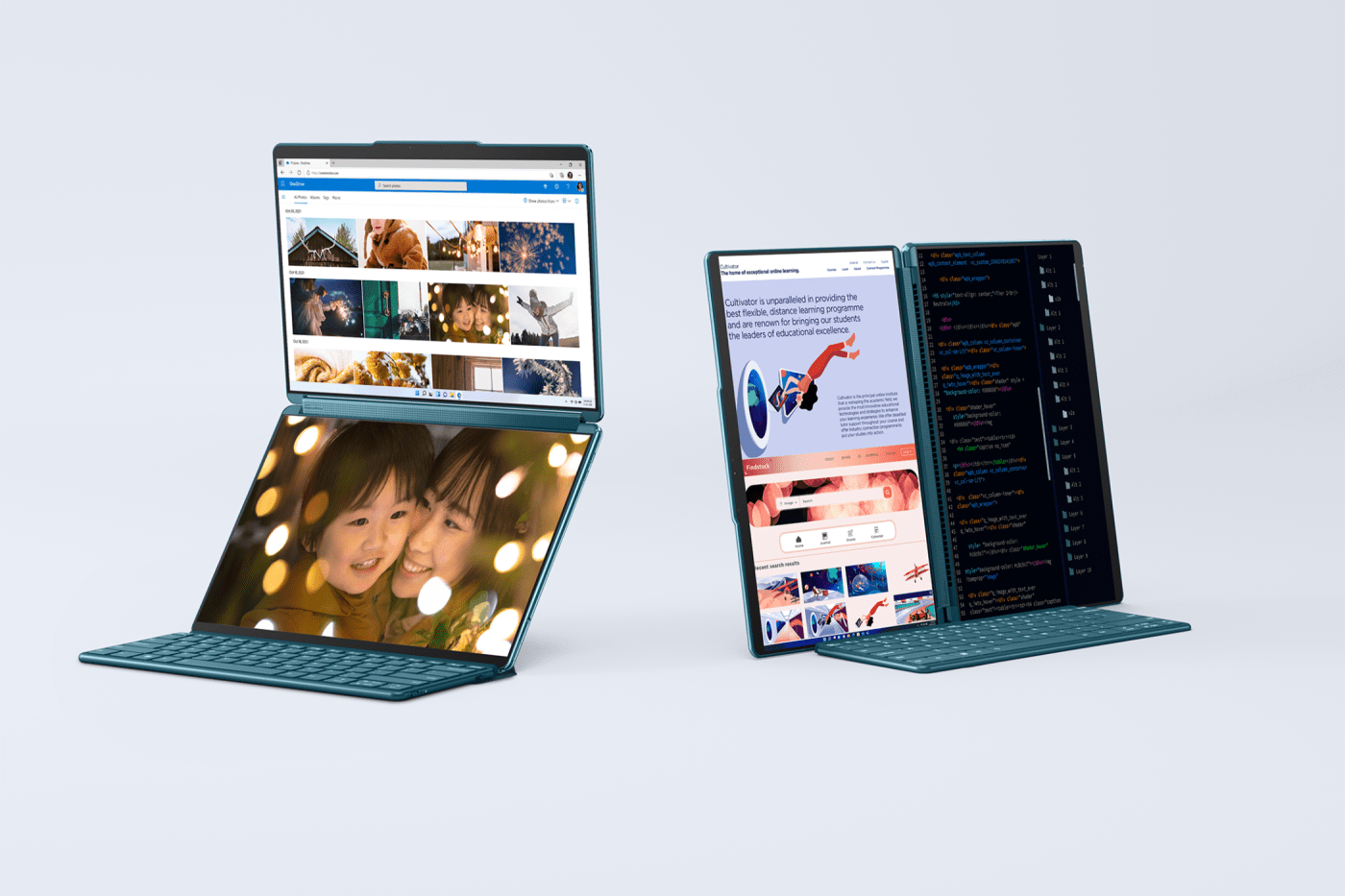 Do you remember the Yoga Book? It was Lenovo’s quirky 2-in-1, ultra-thin laptop that did weird things with the keyboard and trackpad (like make them touch-sensitive or completely transform them into an E-Ink screen). For CES 2023, the company is bringing it back in the form of the Yoga Book 9i, and yes, it’s still plenty funky and weird.

The Yoga Book 9i comes with not one, but two 13.3-inch 2.8K OLED displays. There’s one in the normal spot that you’d find a laptop screen and a second in the deck where the keyboard and trackpad usually go. This machine is quite literally two laptop screens glued together by a 360-degree hinge.

Now, this raises two questions: where is the physical keyboard and mouse, and what’s the point of a device like this? The answer to the former is pretty straightforward: in the box, Lenovo includes a keyboard folio (which is missing a trackpad) that can snap to the lower display for a more traditional experience, or unfold and act as a stand. Regarding the latter, Lenovo sees it as a device “to empower the creative to craft their own story.” That’s according to their press release, which is chock-full of buzz words and key phrases to make it seem like this laptop is a revolutionary computing device every laptop user needs to buy.

It doesn’t seem like that at first glance, but it does come off as something else: an alternative to foldable PCs. Lenovo’s been trying to get the ThinkPad X1 Fold off the ground since the first one was announced at CES in 2020. With a newer, more durable, more capable model nearing its ship date, the company hopes these larger form factors will eventually take over the mainstream.

But it’ll be a while before that happens, thanks to prices being so high and durability remaining a huge question mark for every device with a foldable screen. The Yoga Book 9i, at least on paper, could serve as a solid entry point for those who want a more versatile experience from their next laptop. It’s also a tad bit cheaper: while still expensive at $2,099.99, it’s $400 less than what the second-generation X1 Fold will start at.

The appeal of the Yoga Book 9i is a little easier to see than it is with the X1 Fold, since it looks more like a traditional laptop but with the added advantage of a dual-screen setup. You can position the device in any orientation you want whether it be folded flat and standing up, bent back in tent mode, or standing on its side. Windows 11 will automatically adapt and let you use both screens as one giant screen or two separate areas. There’s also a nifty five-finger gesture that lets you move content between the two panels with ease.

Under the hood, Lenovo includes Intel’s 13th-generation Core i7-U15 processor with Iris X graphics. You get 16GB of DDR5X RAM, up to 1TB of PCIe Gen 4 storage, Bowers & Wilkins speakers built into the hinge, Dolby Vision and HDR support, a 1080p webcam with Windows Hello IR sensors, and an 80WHr battery that can last to 10 hours with both screens and up to 14 hours with a single screen. You’ll also find Wi-Fi 6E, Bluetooth 5.2, three Thunderbolt 4 ports, and a privacy shutter for the webcam onboard.

The Yoga Book 9i comes with a stylus in the box so you can use some of the note taking features Lenovo includes, such as the ability to turn one of the screens off and strictly use it for note taking. It ships in eco-friendly packaging and comes in a single Tidal Teal color.