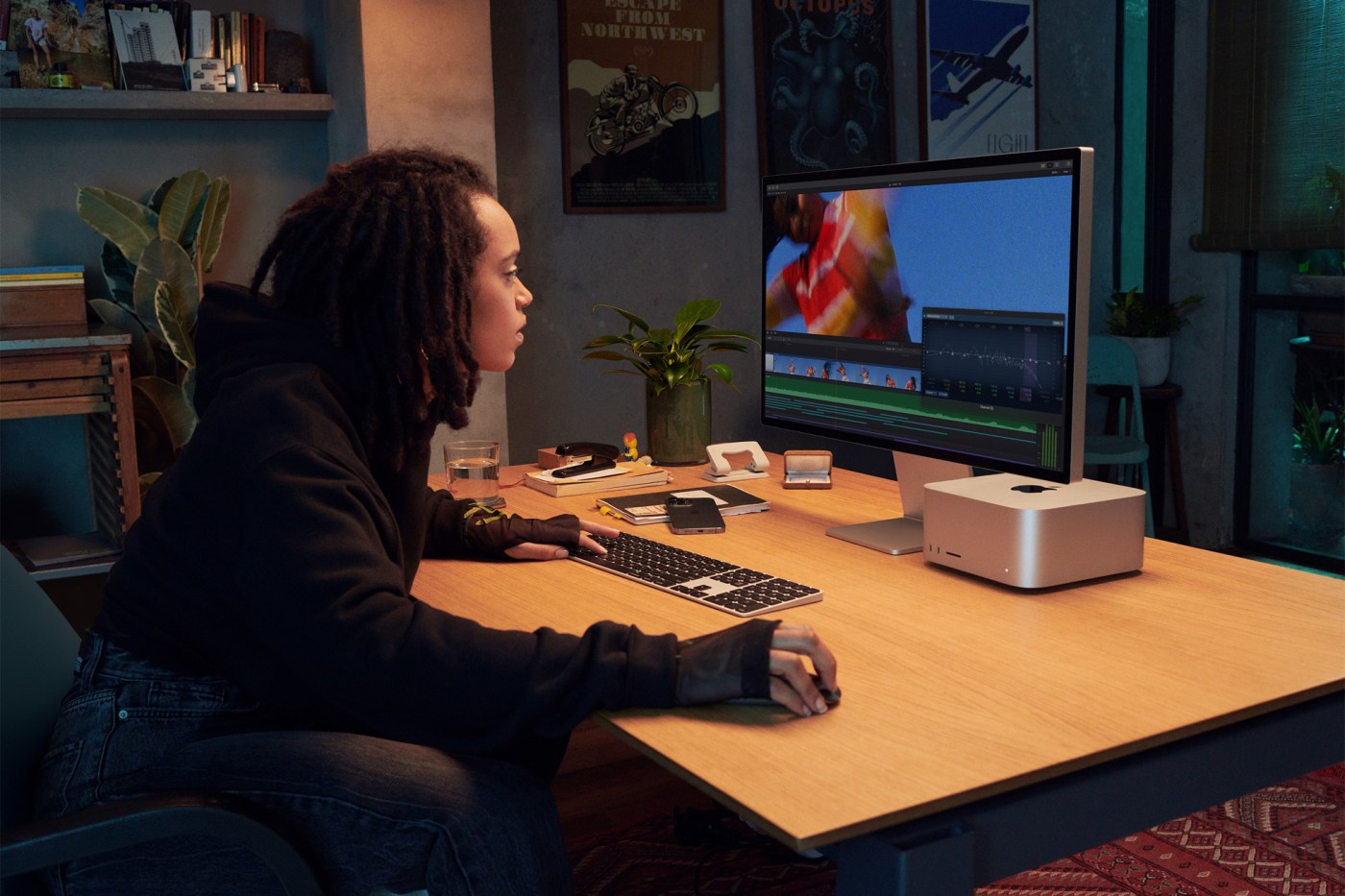 In its push to attract creative professionals to its products, Apple made three huge announcements during its March 8th event: the M1 Ultra processor, the Mac Studio, and the Studio Display. The widely expensive and incredibly intriguing devices are meant to be purchased together for the ultimate creator studio setup, and they certainly seem promising.

M1 Ultra and the Mac Studio

The M1 Ultra is probably Apple’s most interesting rendition of the M1 chip since the original debuted in November of 2020. It’s literally two M1 Max chips that are connected to each other through Apple’s new UltraFusion technology. The company says it uses a special silicon interposer that connects the two chips with more than 10,000 signals, “providing a massive 2.5TB/s of low latency, inter-processor bandwidth” as stated in its press release. This lets Apple tout numbers that are double what you’d get with a single M1 Max chip, such as;

The result is a chip that will undoubtedly set new standards for high-end processors going forward. Apple says the M1 Ultra “delivers 90 percent higher multi-threaded performance than the fastest available 16-core PC desktop chip in the same power envelope” and “faster performance than even the highest-end PC GPU available while using 200 fewer watts of power.” As vague as those claims are I think it’s still safe to say this chip will be very, very powerful.

And that brings us to the Mac Studio, the first Mac that gets the M1 Ultra. To lower the price, Apple will sell configurations of the computer with the M1 Max chip, but all eyes will be on the M1 Ultra variants to see how far you can push it.

Touching on the design, the Mac Studio looks like a taller Mac mini. It features an advanced ventilation system with double-sided blowers, “precisely placed” airflow channels, and over 4,000 perforations on the back and bottom of its enclosure to help air keep the internals as cool as possible. Apple says the Mac Studio will remain quiet under most workloads, but you could eventually hear the fans spin up if you push it hard enough.

If you were worried about ports, don’t – the Mac Studio has plenty of them. There are four Thunderbolt 4 ports, a 10Gb Ethernet port, two USB-A ports, an HDMI port, and a headphone jack on the back. On the front, there’s a full-size SD card reader which is enough to make a grown man cry. There are also two USB-C ports that become Thunderbolt 4 ports if you pick up a model with an M1 Ultra.

In terms of performance, Apple is promising everything plus the kitchen sink. Here are some of the company’s own metrics comparing the M1 Ultra-powered Mac Studio’s performance to its other pro-grade Macs.

Those are some serious claims, especially the ones about the Mac Pro which will continue to retail for thousands of dollars more than the Studio after it launches. Until there’s a Mac Pro powered by Apple’s silicon (teased as coming “another day” during the event), it looks like the Mac Studio will be the machine to get if you want the best performance possible.

The Mac Studio can be configured with up to 8TB of SSD storage which delivers up to 7.4GB/s of performance. You’ll also get the 128GB of unified memory that the M1 Ultra is capable of handling. The most expensive configuration of the Mac Studio will set you back $7,999, if you’re curious.

To coincide with the Mac Studio, Apple announced the Studio Display. At $1,599, it’s significantly cheaper than the $4,999 Pro Display XDR, and this one comes with a stand in the box.

The Studio Display features an aluminum design with narrow bezels. By default, its stand only supports a viewing angle of up to 30 degrees tilted back – you’ll have to pick up the optional tilt- and height-adjustable stand for a more versatile setup. Apple is also happy to sell you a VESA mount adapter so you can rotate the screen to portrait orientation.

The display measures in at 27-inches and offers a 5K resolution. The Retina screen boasts 600 nits of brightness, support for the P3 wide color gamut, and True Tone. There’s an anti-reflective coating over the display, and you can spring for a nano-texture anti-glare coating if your space is particularly filled with tons of light.

Apple throws in a ton of extras with the Studio Display to justify its high price tag. Inside, there’s an A13 Bionic processor that’s used to power the included 12MP ultra-wide camera. This means Center Stage, Apple’s way of keeping your head in frame during video calls, is finally coming to the Mac. In addition, there’s a triple microphone array at the top for picking up your voice.

The feature I’m most looking forward to checking out are the speakers. Apple includes a high-fidelity six-speaker sound system on the Studio Display which the company says delivers “an unbelievable listening experience.” My 14-inch MacBook Pro blew me away the first time I heard its speakers, so I assume these speakers will be at least equally as impressive.

On the back, Apple includes three USB-C ports that support up to 10Gbps speeds, while the lone Thunderbolt 4 port features 96W power so you can fast-charge your MacBook Pro when it’s connected. In addition, Apple says you’ll be able to connect up to three Studio Displays to your MacBook Pro at once.