There's nothing radically different about these phones, but they're solid enough. 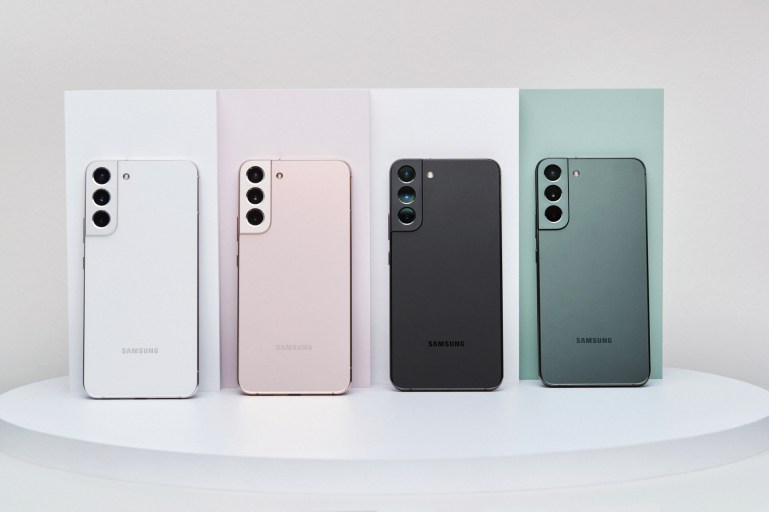 Similar designs, similar experiences, similar price tags. This is the story of the Galaxy S22 and S22 Plus, Samsung’s latest flagships which sit below the S22 Ultra in the company’s lineup. Compared to their S21 predecessors from last year, there’s not a lot different or groundbreaking to talk about. And while the upgrades Samsung does include seem to be meaningful, they likely won’t spark year-over-year upgrades like past Galaxy S devices have.

And that’s fine. Samsung’s focus isn’t necessarily on the standard S22 devices this year. It’s instead on the S22 Ultra, which serves as a spiritual successor to the Galaxy Note 20 Ultra with its included S Pen. It’s the company’s highest-end phone in its lineup, so it deserves the attention it’s getting. The S22 and S22 Plus are positioned as cheaper options that still offer a great experience, and that’s enough for most consumers.

The Galaxy S22 and S22 Plus look virtually identical to the S21 series with their large camera bumps and minimal bezels, but Samsung did change one thing about their look: the sides are now much flatter. They’re not as flat as the sides on Apple’s latest iPhones, but they’re certainly no longer round like they used to be.

The specs of both phones are very similar. You get a Snapdragon 8 Gen 1 processor, 8GB of RAM, and up to 256GB of storage. There’s an in-display fingerprint reader in each of them for security, and they both boast IP68 certifications. The S22 comes with a 3,700mAh battery and 25W charging while the S22 Plus gets a 4,500mAh battery and 45W charging. Neither phone can wirelessly charge past 15W, so if you’re looking for fast top-up speeds over Qi, you’re out of luck.

The Galaxy S22 and S22 Plus also share the same cameras which consists of a 50MP f/1.8 main camera, a 12MP f/2.2 ultra-wide, a 10MP f/2.4 telephoto, and a 10MP f/2.2 selfie. All four are nearly identical to what’s found on the S21 series, with Samsung boasting a dramatic increase in light and detail capture in darker conditions compared to the previous generation. Samsung also says the phones are better equipped for taking portrait photos with more advanced methodology for deciphering between the subject and its background.

The new Galaxy S phones ship with Android 12 out of the box with One UI 4 on top. Samsung is promising four generations of Android upgrades, as well as five years’ worth of security patches. This is perhaps the most impressive part of each phone as it’s the longest Samsung has ever committed to supporting its phones.

Priced at $799.99 and $999.99 respectively, the Galaxy S22 and S22 Plus are two very interesting smartphones. The categories each fall into due to their price points has seen exceptional growth over the past couple of years, with competitors like Google sprouting up and offering flagship-level experiences at a fraction of the price. Whether consumers are willing to spend $800+ on phones that don’t do much more than an average smartphone can remains to be seen.

Samsung says the S22 series will launch on February 25th. Preorders are now live on Samsung’s website with a bonus $200 credit for those who place their order early.