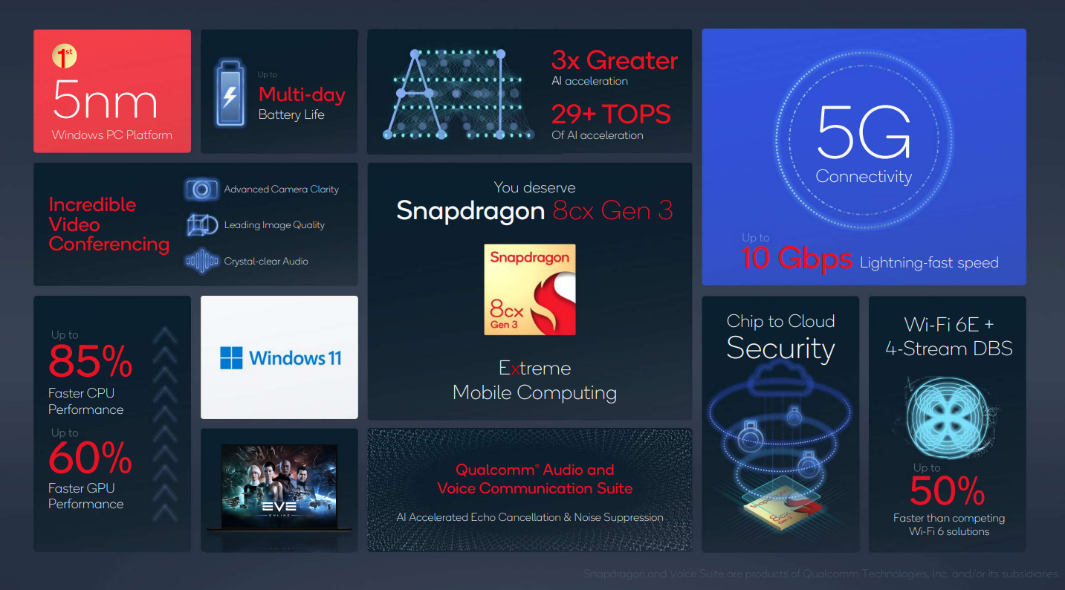 It's apparently 85 percent faster than the Gen 2, according to Qualcomm.

Qualcomm has announced its third generation of the Snapdragon 8cx processor found in various Windows and Chrome OS PCs. Surprisingly enough, the company is promising some serious performance gains over the second generation thanks to a new 5nm process, delivering up to 85 percent better performance day to day. The chip also has a 60 percent faster Adreno GPU compared to “the competitive x86 platform.”

The Snapdragon 8cx Gen 3 is able to deliver on these new performance claims thanks to a new design that consists of four Kryo cores based on Cortex-X1 and four cores based on Cortex-A78. Combined, the chip is capable of managing performance per watt much more efficiently than it could before, while the added graphics boost helps in ensuring animations and other heavier tasks are executed smoothly.

The chip is also compatible with Qualcomm’s new Snapdragon X65 5G modem which first debuted as an integrated part of the Snapdragon 8 Gen 1 for smartphones. However, on the 8cx Gen 3, there’s no modem directly built in. That’s because Qualcomm wants to give OEMs options so that the 8cx Gen 3 can make its way into more devices at various price points. The company says third parties will be able to choose from the new X65 modem, the older X55, or the X62.

As per usual, Qualcomm is also promising improved AI performance with support for over 29 trillion operations per second, which is just insane.

Up until this point, Qualcomm’s ARM-based chipsets that make their way into Windows and Chrome OS devices have proven to be nothing short of disappointing. On Windows, there’s very little native app support, and performance is typically abysmal at best. Meanwhile, on Chrome OS, you have better luck with app support and performance since both areas are more suited to run on Qualcomm-branded hardware (you have the smartphone market to thank for that).

With the Snapdragon 8cx Gen 3 and its somewhere surprising performance claims, Qualcomm might finally have the chip necessary to make ARM a more common trait in the PC market. It’s virtually nonexistent at the moment, but that might not be the case for long if the chip delivers on its promises.

That being said, don’t think this is going to be a miracle chip like Apple’s M-series was for the Mac. Qualcomm has already stated that it won’t introduce a chip that can compete at that level until 2023, and that timeline could always shift if development delays get in the way. For now, it looks like the company will focus on deploying the 8cx Gen 3 as widely as it can and, hopefully, gain marketshare as a result.

It at least seems like Qualcomm’s ready for a serious try at getting more PCs to run on Snapdragon, and it’ll be interesting to see what kind of devices crop up in 2022 with it in tow.