Apple finally unveiled new AirPods – here’s who should buy them

Priced at $179, the new AirPods seem like solid mid-rangers in Apple’s lineup. 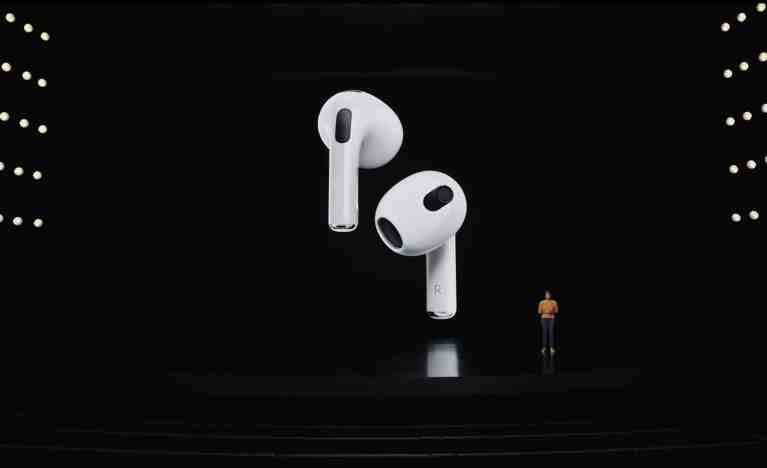 For quite some time, we’ve been waiting for Apple to unveil a third-generation of its baseline AirPods with a new design, a few extra features, and a similar price tag to past iterations. Everyone thought they’d pop up at the iPhone 13 event, but they ultimately didn’t. Luckily, we finally saw them for the first time at Apple’s MacBook Pro event where they were unveiled alongside a new Apple Music plan and a few new HomePod mini colors.

What are the third-gen AirPods?

The third-gen AirPods look different compared to previous versions. Apple is using a newly-sculpted design that sits a bit deeper in your ear. It’s sort of like the AirPods Pro but without a removable silicon tip. Apple is also including pressure-sensitive stems (shorter than previous AirPods) for media controls.

For the first time on the company’s standard AirPods, Apple is including sweat and water resistance. The buds have an IPX4 rating which is just enough to survive sweaty ears while working out and light rain.

Apple is also including better battery life on the new AirPods. According to the company, on their own, the buds will last up to six hours on a full charge. The case will give you up to 30 hours of usage. Meanwhile, charging for about five minutes should be enough for a full hour of usage.

Speaking of charging, Apple is officially acknowledging that AirPods are compatible with MagSafe, Apple’s magnetic charging solution. You can technically wirelessly charge older AirPods with a wireless charging case via an iPhone MagSafe charger since both use Qi, but I suppose the new AirPods get actual magnets to connect to the charger more securely. If you’re an AirPods Pro owner, you’ll be able to get a new case that also supports MagSafe.

Of course, with any new headphones comes new sound quality, and Apple is promising some meaningful improvements here. The company includes a custom driver and a high dynamic range amplifier in each earbuds for ”powerful bass with crisp, clean high frequencies.” The mics are also seeing improvements with a new acoustic mesh covering for improved wind protection. A new speech codec called AAC-ELD is also included for better overall clarity.

Apple also includes its Adaptive EQ feature from the AirPods Pro which uses microphones to measure how well the earbuds fit in your ears to adjust sound output for optimal listening. They also support Spatial Audio through Dolby Atmos.

As far as “smart” features are concerned, Apple includes a skin-detect sensor that can tell whether an AirPod is still in your ear. If it detects it’s not, it’ll pause your music automatically. In addition, Apple includes its quick pairing process that’s compatible with all of its devices.

Who should buy these things?

This is a really good question because there are feature here that not only improve upon the second-gen AirPods, but also the AirPods Pro. They offer longer battery life, Adaptive EQ, sweat resistance, and an improved design without the need for removable tips. I’m not saying you should buy these if you already own AirPods Pro, but if you don’t, the reasons for buying them instead of these remains a very short list.

Apple will confuse consumers a bit more by keeping the second-gen AirPods in the lineup as a sort of entry-level offering. They’ll cost $129 while the third-gen AirPods cost $179. The AirPods Pro with ANC and removable tips will still cost $249. Overall, the third-gen AirPods seem like a solid middle ground for Apple’s lineup, and anyone with standard AirPods will likely f8ind them to be a decent upgrade.

Apple says the new AirPods will go on sale October 26th. They’re up for preorder now.