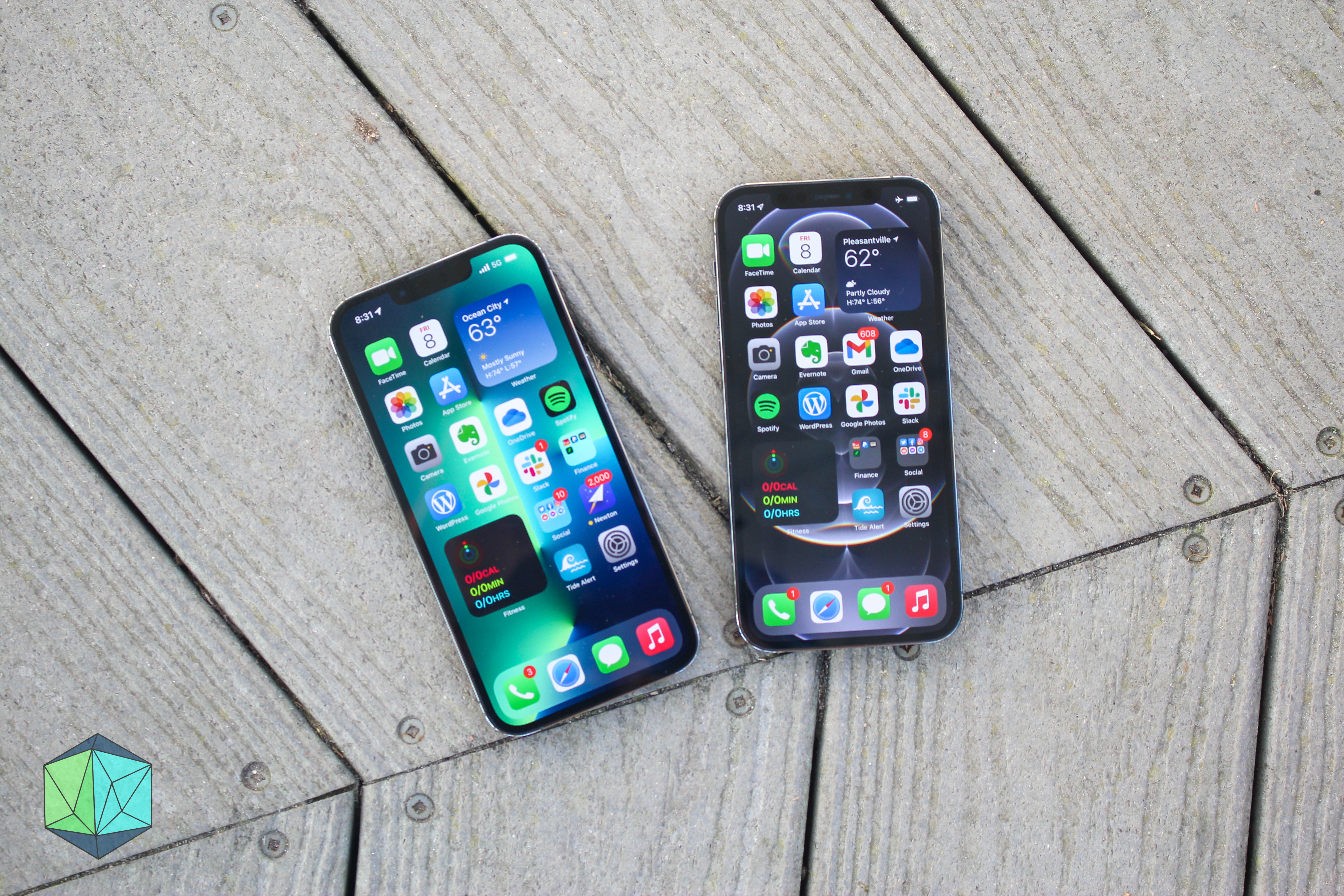 Three areas where the iPhone 13 Pro improves upon the 12 Pro were enough for me to upgrade year-over-year.

The cool thing to say about this year’s new iPhone lineup is this: if you have an iPhone 12, there’s no real reason to upgrade to an iPhone 13. There are barely any notable differences, every new iPhone looks the same, and it isn’t like this year’s phones are cheaper.

I completely get this. If someone in my family or friend group told me, ”Hey, I have an iPhone 12 but I think I’m gonna upgrade to a 13,” I’d tell them they’re better off waiting until next year. After all, we’re expecting a more meaningful iPhone refresh in 2022 with a redesigned chassis and (potentially) no notch. Next year’s iPhones could even come with Touch ID under the screen, which I know a lot of people are crossing their fingers for.

But if I’m telling a family member or friend to not upgrade to an iPhone 13, it’s because they’re not a nerd like me and don’t care about the small stuff.

I’m talking, specifically, about an upgrade from the iPhone 12 Pro to the iPhone 13 Pro. Two of Apple’s most premium smartphones in recent memory, the devices share a lot of similarities and look nearly identical when not side-by-side. This alone has created a culture where virtually every tech reviewer suggests skipping the 13 Pro if you already have a 12 Pro. And to be honest, for most people, that’s true. But for the nerds – for those who care about specs, display tech, and fancy cameras – the iPhone 13 Pro is actually a pretty meaningful update.

I have three reasons for upgrading from my 12 Pro. I value the screen, camera, and battery life of my smartphone far too much to not at least consider an upgrade to the 13 Pro, a phone that improves each of those areas in meaningful ways. These reasons alone were enough for me to justify an upgrade, and I have a feeling there are others like me that feel the same way.

Before Apple was even close to announcing the iPhone 12 last year, I planned on buying one. Every rumor seemed to indicate that we’d finally get an iPhone with a refresh rate faster than 60Hz. At this point, I had been using many different Android phones with fast refresh rates which made it seem impossible to switch back to a slower one. But then Apple announced the iPhone 12 series, and not a single model had a faster refresh rate.

This bewildered me, to say the least. Competitors had been offering faster refresh rates for a couple of years at that point, and for Apple to seemingly fall behind like that didn’t make sense. It certainly didn’t seem like Apple was ”waiting for the technology to be right” since they’d been shipping ProMotion on the iPad Pro for years.

Of course, I did wind up buying an iPhone 12 Pro because I needed a new phone. That’s not to say I was okay with the 60Hz screen, however. On the contrary, I was pretty disappointed that this generation of iPhone – the one with the introduction of 5G and a complete redesign – didn’t also introduce a faster refreshing screen. It’s still a great phone, but once you use a phone that refreshes faster than 60Hz, it’s really hard to go back.

As the rumors began swirling leading up to the iPhone 13 announcement, all signs indicated we’d finally get a pair of iPhones with faster refresh rate displays. The iPhone 13 Pro and 13 Pro Max, as virtually everyone assumed, did wind up shipping with ProMotion which meant 120Hz finally came to the iPhone.

Without even seeing how much of a difference it makes in real life, I placed a pre-order for the 13 Pro through my upgrade plan with T-Mobile. I’ve been dreaming of a 120Hz iPhone ever since I started using the 2018 iPad Pro, and boy was I delighted when I got my phone.

120Hz on the iPhone 13 Pro feels like a feature that’s been there for years. What do I mean by that? For whatever reason, it felt completely natural on the device, and I almost didn’t even notice it was there. It was only after I went back to my 12 Pro that I noticed the clear advantage to having ProMotion on the iPhone. Animations weren’t as smooth on the 12 Pro, text looked blurrier when you scrolled, and the entire experience just felt slower.

For a single feature to alter your experience with a phone in such a profound way is very interesting to me, but it obviously means nothing if you can’t notice the faster refresh rate. I know there are plenty of people who either don’t know what to look for or simply can’t tell the difference between 60Hz and 120Hz. But if you’re like me and can clearly see the advantage to having ProMotion on your iPhone, you’ll undoubtedly be thrilled that you upgraded.

I’ll have more to say on the overall quality of the cameras in my full review, but I wanted to talk about them here because they were another reason I considered picking up a 13 Pro.

During its event, Apple positioned the iPhone 13 Pro’s cameras as being some of the very best you can get on the market. They pegged them as a significant improvement over the 12 Pro, which seemed impossible to me given how good the 12 Pro’s were. With bigger sensors across the system and a renewed focus on professional phone photography, Apple’s improvements with the iPhone 13 Pro’s cameras seemed too good to be true.

Once I started using the new cameras, I understood what Apple was getting at. Standard photos taken with the larger 12MP f/1.5 lens are richer with more detail compared to the iPhone 12 Pro’s 12MP f/1.6 lens. Pictures taken with the new 12MP f/2.8 telephoto lens are sharper thanks to the upgraded 3x optical zoom (in contrast to the 2x optical zoom on the 12 Pro). Even ultra-wide photos are improved with an upgraded 12MP f/1.8 120-degree lens that lets in significantly more light.

These photos, while different, look very similar to the naked eye. The iPhone 12 Pro still has a great camera system, and like many modern higher-end smartphones, as long as you have a ton of light you’re bound to take a nice photo. That was the case when I compared the 13 Pro’s camera system to the 12 Pro, with many photos almost coming out identical in quality

It’s in the finer details where I make my justification for buying the 13 Pro. Generally speaking, photos taken with the 13 Pro feel more true to life and less processed. I like the low-light improvements Apple made to make darker scenes seem more like real life, opposed to trying to lighten everything a bit to extract detail like the 12 Pro does. The iPhone 13 Pro feels more like a human eye, whereas the 12 Pro feels like a computer-generated human eye with too much HDR processing.

I wouldn’t say any of Apple’s new camera features like Photographic Styles or Cinematic Video are reasons to upgrade from a 12 Pro. But from a quality standpoint, it’s easy to make the case for switching to the 13 Pro.

I’m a smartphone camera nerd. I like having the best camera I can get, and the iPhone 13 Pro has proven to be the phone with that camera. I can notice the small quality updates compared to the 12 Pro, and it adds value to my overall experience. If you like the photos your 12 Pro takes, you’re probably better off sticking with it since it’s still a terrific camera system. But for the camera nerds who are thinking about upgrading to the 13 Pro because of these smaller improvements, trading in your 12 Pro won’t be a regrettable experience.

I’ll keep this section short. The iPhone 12 Pro’s battery life wasn’t very impressive to me. Before I got the 12 Pro, I was used to the Google Pixel 5 and its all-day stamina powered by a 4,080mAh cell. The iPhone 12 Pro and its 2,815mAh battery, to me, felt like a downgrade.

Granted, the 12 Pro wasn’t necessarily bad, just unimpressive. I would end days with around 30 percent left in the tank which, while still qualifying as ”all-day endurance,” isn’t something that’ll blow you away. So when I heard the 13 Pro would come with better battery life, my interest was certainly peaked.

After a couple of weeks with the device, I can confidently say the improved endurance is very noticeable. I’m ending days with at least 50 percent left thanks to the slightly larger 3,095mAh cell and more efficient A15 Bionic processor. On lighter days where I’m in meetings and not on my phone, I can end a day with 70 percent left, giving me plenty of juice for another day.

Whereas you were limited with one-day endurance on the 12 Pro, it’s extremely easy to achieve two-day endurance with the 13 Pro. That’s a significant improvement, and I think it’s a good reason to upgrade year-over-year if you’ve found your 12 Pro to be lacking in the battery department.

I realize telling people to upgrade their phone after having it for only one year is bad financial advise, but I had special circumstances. In my case, T-Mobile offered me an upgrade sooner than I thought, and all I had to do was trade my 12 Pro in and pay a chunk of the 13 Pro’s cost. I could afford it, so I did it.

Do I regret it? Not one bit, and it’s all because of the year-over-year improvements Apple made that I outlined above. I’ve been waiting forever for a ProMotion-enabled iPhone, and the iPhone 13 Pro delivered. I appreciate more granular camera improvements, so the 13 Pro’s system obviously appeals to me. I felt that the 12 Pro’s battery life was unimpressive, and the 13 Pro fixes that ten-fold.

To me, these are easy reasons to justify upgrading. While not everyone will be able to justify an upgrade like this, I feel like there will be a lot of people who value improvements in these areas and would benefit from a jump from the 12 Pro to the 13 Pro. I’m glad I upgraded, and if you’re like me, I think you will be too.