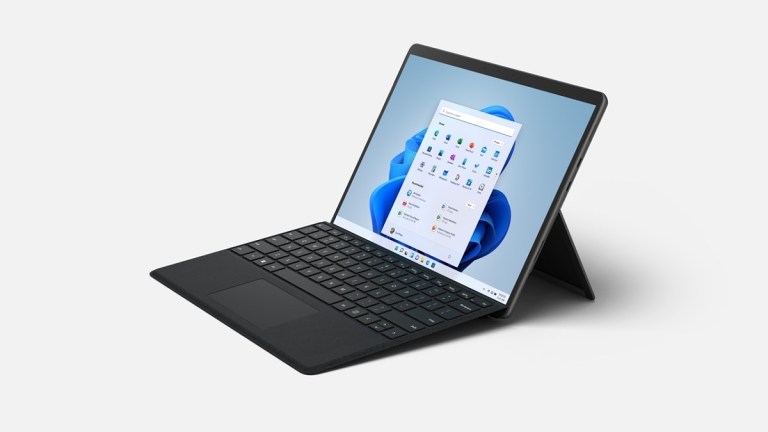 It’s been over seven years since Microsoft made a meaningful change to the design of its Surface Pro. The Surface Pro 3 ushered in the design we’ve been used to seeing over and over again, and it quickly began aging as more modern designs from competitors began popping up with rounded corners, minimal bezels, and updated ports. Finally, in the Year of Our Lord 2021, we have a Surface Pro redesign thanks to the Surface Pro 8.

You wouldn’t be wrong if you say to yourself, “Wait, I’ve seen this Surface before.” Microsoft’s Surface Pro 8 looks a lot like the Surface Pro X from 2019. The display jumps up to 13-inches from 12.3-inches, while the bezels get much slimmer. Microsoft also rounded the corners of the device to look and feel more friendly. Obviously, you still get a kickstand, and there’s still magnetic connectors on the bottom for a keyboard.

Touching on the display, Microsoft’s latest PixelSense technology gets another adjective attached to its name: PixelSense Flow. The “Flow” part means the Surface Pro 8’s screen can refresh up to 120 times a second. Faster refresh rates on any mobile device you put them on automatically look better, so I can only imagine the 120Hz refresh rate on the Pro 8 will look fantastic as well.

Notably, Microsoft allows the screen to refresh at variable rates depending on what type of content is on the screen. It’ll stick with 60Hz if the device detects you’ve stopped doing stuff to save battery life. Then, if you scroll or draw, it’ll go back up to 120Hz.

The display also boasts a few other enhancements like support for Dolby Vision, Adaptive Color Technology, and better brightness. Microsoft says the Surface Pro 8 has its “most technically advanced display [they’ve] ever built.” It’s a bold claim, but at least on paper, it makes sense.

Around the rest of the device, you’ll find Dolby Atmos speakers, dual far-field Studio Mics, a 5MP webcam, and a 10MP 4K-enabled rear camera. The Surface Pro 8 also has a lineup of new ports, including two USB-C Thunderbolt 4 ports with support for multiple 4K display output. This is perhaps one of the biggest upgrades Microsoft has made to the Surface Pro line since its inception, so it’s really nice to see. Oh, and in case you’re wondering, you still have to deal with a Surface Connect port to juice up the battery.

Speaking of which, Microsoft says the new Surface Pro 8 will last up to 16 hours on a full charge. Obviously, it’s very unclear whether that number is accurate since no one’s used a Pro 8 yet, so take that estimate with a grain of salt.

What you shouldn’t take with a grain of salt are the performance enhancements Microsoft is promising. The Surface Pro 8 has a lot more power under its hood compared to the Pro 7 thanks to new 11th-gen Intel Core i5 and i7 processors, along with 32GB of RAM. You can configure the device with up to 1TB of storage if you want, and the company touts up to 74 percent faster graphics performance for those who have heavy workloads. General performance should see a 40 percent increase generation-over-generation.

Sony will unveil its WH-1000XM5 headphones on May 12th

With a new Surface Pro comes new accessories, and Microsoft has a couple to show off. There’s a new Surface Pro Signature Keyboard that, admittedly, looks very similar to its predecessor. However, above the actual keys is a slot for the new Surface Slim Pen 2, included with the keyboard. Microsoft added a special vibration motor to the pen that ticks ever so slightly to make it feel like you’re writing and drawing on paper instead of glass. It also has improved latency, which is nice to see.

Undoubtedly, the Surface Pro 8 will excite fans of the Surface Pro series and likely prompt plenty of upgrades when it goes on sale October 5th. Of course, the device goes without saying it’s been a long time coming for a major revamp like this. Better late than never, I suppose.

Microsoft’s Surface Pro 8 will start at $1,099.99 and is available for preorder now. The new Surface Keyboard Signature Edition with Slim Pen 2 will retail for $279.99 and be sold separately.