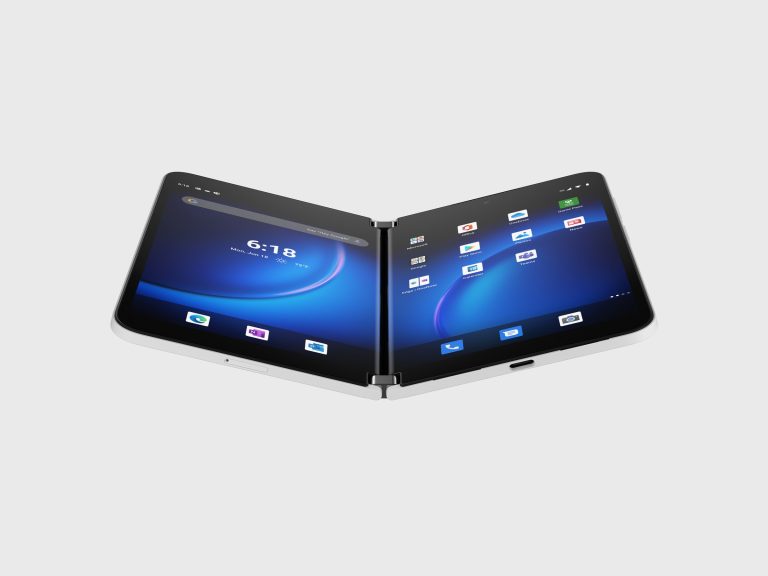 These claims, while they sound pretty drastic, can at least be justified. Microsoft is betting on the Duo 2 to convince people that this is actually a good thing to own. It has better specs, a better design, new hardware and software tricks, and a premium price tag. It looks incredibly sexy in the renders Microsoft provides, and it’s confident it can take on the foldables of the world like Samsung’s own Galaxy Z Fold 3.

But can it though?

The thing that makes the Surface Duo a Duo is the dual screen form factor. Microsoft thinks two screens are better than one, and until they ship a phone with a folding screen, we have to assume that’s their logic for sticking with two separate panels for another year.

At least they’re both improved. The Surface Duo 2 has a set of twin 6.8-inch 1344×1892 OLED displays that have 90Hz refresh rates and slight curves that blend into the hinge of the device. That curve acts like a Samsung Edge panel which can show you notifications, alert you if you have an incoming call, and so forth. It seems like it’ll be more useful than the “peak” gesture on the original Surface Duo where you’d open the device slightly to see a side panel of your notifications.

The screens are only the start of the experience, with the software playing a huge part in what makes the Surface Duo unique. For this second generation, Microsoft is promising a better overall experience with improvements and polishing throughout the system. Speaking of which, the Duo 2 is running Android 11, and the company is promising more frequent updates down the line. It’s unclear if that promise will actually be kept, and it’s even more unclear if the Duo 2 will get Android 12 given how the original Duo is still on Android 10. We’ll just have to wait to find out.

Microsoft also touted better app support, with optimized versions of Office and some popular games like Asphalt Legends 9, Modern Combat 5, and Dungeon Hunter 5. The company seems to think this is a good device for cloud gaming thanks to Xbox Game Pass, so if that’s something you’re into, it might be worth demoing the Duo 2 to see if it lives up to the hype.

Obviously, for a good smartphone experience, you need the right specs. Luckily, it seems Microsoft knows this too. Instead of sticking with aging specifications like it did with its predecessor, the Surface Duo 2 gets a more relevant Snapdragon 888 processor, 8GB of RAM, and up to 512GB of storage. NFC and 5G support are also onboard, which will help make the device more appealing to those who want to use it primarily as a phone.

You also want actual cameras on your phone, and that’s something the original Duo failed to provide. Luckily, the second-gen version fixes that with a triple lens setup on the rear of the device. You’ll find a main 12MP f/1.7 sensor, an ultra-wide 16MP f/2.2 sensor, and a telephoto 12MP f/2.4 sensor inside a pretty large camera bump. That bump is angled slightly so when you wrap the other screen around the Duo 2, it’ll sit a little more flush.

Apple Wallet can finally store your ID, as long as you’re in Arizona

The Surface Duo 2 also supports Microsoft’s new Surface Slim Pen 2 which includes a vibration motor to eek out tiny bumps to simulate the feeling of drawing on paper instead of glass. It can magnetically attach to the backside of the Duo 2 and wirelessly charge at the same time. (Notably, the Duo 2 lacks wireless charging itself which is a bit odd.)

Are two screens better than one? That remains to be seen. I’m staying pretty skeptical as to whether consumers think having two separate panels that form an 8.3-inch canvas is better than a foldable 7.6-inch panel. Also, on a foldable phone, you can usually interact with it when it’s closed. You can’t really do that on the Duo 2.

Of course, Microsoft will also position the Surface Duo 2 for other use cases. It could be an accessory to your main smartphone, it could be a more versatile tablet replacement, and it could even be the preferred phone for business customers who need function over form. It has a lot going for it, with a good list of specs and a promise of better software support. Microsoft is certainly making a case for why you should buy one of these things.

At the end of the day, though, sales and public response will tell us if Microsoft hit the nail on the head with this generation or if it’ll flop as hard as the original Duo did.