Microsoft gets crazy with the Surface Laptop Studio 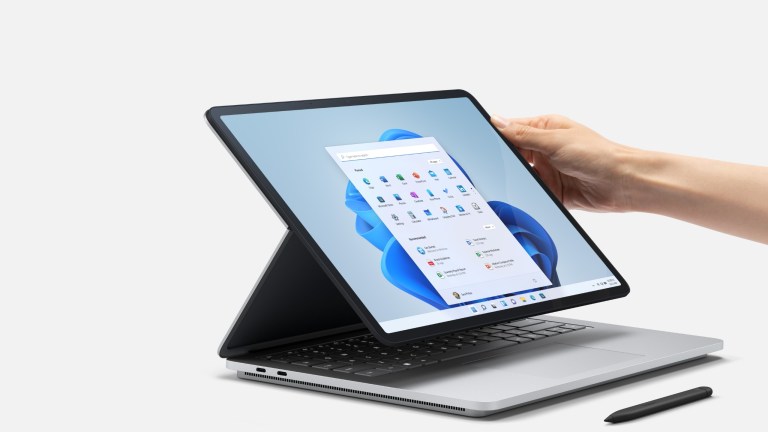 The Surface Laptop Studio is definitely one of the crazier pieces of tech Microsoft has announced in the past few years. Typically, laptop hardware that’s defined as “unorthodox” or “weird” is reserved for companies like Asus and Acer who actually ship weird, unorthodox laptops like Apple ships MacBooks. But the Surface Laptop Studio isn’t strictly geared toward users with unorthodox workflows. Rather, it wants to enhance the workflows you already have and potentially introduce new ones.

I can see why so many people are excited about this thing. Microsoft is basically taking the power of the Surface Book and the form factors of the Surface Laptop and Studio and combining them into one. It seems nuts when you look at it, but also practical in a way.

I say that because on the surface (pun definitely intended), the Surface Laptop Studio seems like an ordinary laptop. Microsoft includes a plethora of average consumer-esque design touches like rounded corners and a big track pad. Even the screen has rounded corners, making for a friendly appearance.

That screen, by the way, measures in at 14.4-inches. It’s a PixelSense Flow display with a 2400×1600 resolution. The “Flow” comes from the addition of a 120Hz refresh rate which Microsoft says is variable. That means it’ll float between 1Hz and 120Hz depending on what type of content you’re interacting with.

Of course, the big selling factor of the display is the fact that it can be pulled toward you like the Surface Studio, making drawing and writing much easier. Microsoft appears to let you make the display almost flush with the base of the laptop, so there’s plenty of versatility in terms of angles you can position the screen in.

Microsoft calls this “Studio mode,” and it can be used for more than just drawing. If you want the screen to be just a bit closer to your eyes when watching a movie or playing a game, you can pull the display over the keyboard and dock it right above the trackpad (a.k.a. use it in “Stage mode”). If you’re reading an article, you can pull it and cover the keyboard and trackpad while still having a decent angle to view text at. This form factor seems pretty versatile, and I’m sure it’ll turn some heads when you bust it out at a coffee shop.

The rest of the Surface Laptop Studio is pretty conventional, obviously besides the huge bump on the bottom where the cooling system lives. Yeah, instead of going the “this laptop has no fans therefore it is quiet please applaud” route, Microsoft decided to just double the thickness of the laptop to accommodate for as much ventilation as possible.

This amount of cooling is likely necessary to keep the Surface Laptop Studio running at peak performance. Microsoft packs in a ton of power here. You get 11th-gen Intel Core i5 and i7 processors, up to 32GB of RAM, and up to 2TB of removeable SSD storage. There are obviously dedicated graphics, with Nvidia’s GeForce RTX 3050 Ti GPU available for those who want it. Microsoft is also throwing in Thunderbolt 4 connectivity, along with two USB 4 ports, a headphone jack, and a Surface Connect port for charging.

Lately, there seems to be a desire for laptops that are more powerful than the ones currently available. More than ever, people seem to want to take their heavy workloads on the go and get the same amount of stuff done as they could on their desktop at home. The Surface Laptop Studio could be one of those machines that can match the needs of these folks. Microsoft isn’t fooling around with the specs, and the device has a design that could appeal to any average consumer. It doesn’t look nerdy, it’s still crazy with a wild hinge system, and it doubles its thickness for the freaking cooling system.

There’s not a doubt in my mind that hardcore Windows users will be paying extra attention to this device. I simply don’t see how power users can’t get excited over this.

It’s even reasonably priced, at least to start. Microsoft will charge $1,599.99 and up for the Surface Laptop Studio, with a top-tier configuration of an i7, 32GB of RAM, and 2TB of storage going for $3,099.99. Whether you can justify the price depends on your needs, but it at least makes sense to consider it if you’re looking for a laptop with a versatile form factor and plenty of power under the hood.