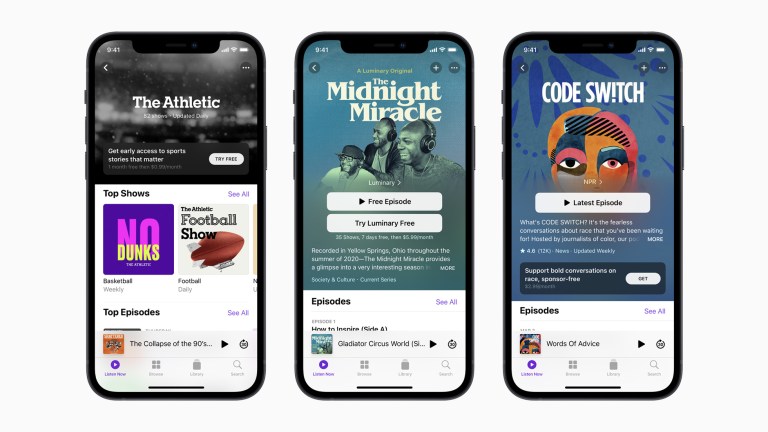 Apple is hoping there’s a business in paying for podcast subscriptions. The company announced today during its Spring Loaded event that it will begin allowing creators to charge regular fees for access to their podcasts. The new program will be built into a redesigned Apple Podcasts app that will ship with iOS 14.5 next week.

According to Apple, podcast feeds with a paywall will be hosted directly through them, not RSS (although your regular feed can still be RSS). Creators will have to pay Apple $19.99 a year to be able to sell podcast subscriptions. In addition, Apple will take 30 percent of revenue earned through subscriptions for the first year of their existence, then 15 percent for the years to follow.

So far, Apple has a handful of partners on board who will be offering podcast subscriptions. This includes Tenderfoot TV, Pushkin Industries, Radiotopia from PRX, QCODE, NPR, the Los Angeles Times, The Athletic, Sony Music Entertainment, and others who aren’t listed. To coincide with the new premium content, creators will also be able to offer Channels – bundles of shows and episodes with custom titles and artwork.

The redesigned Podcasts app will also have a new Smart Play button that “helps listeners automatically start episodic shows from the latest episode and serialized shows from the beginning of each series.”

“Fifteen years ago, Apple took podcasts mainstream, offering creators a premier, open platform to inform, entertain, and inspire hundreds of millions of listeners around the world,” said Eddy Cue, Apple’s senior vice president of Internet Software and Services. “Today, Apple Podcasts is the best place for listeners to discover and enjoy millions of great shows, and we are proud to lead the next chapter of podcasting with Apple Podcasts Subscriptions. We’re excited to introduce this powerful new platform to creators around the world, and we can’t wait to hear what they make with it.”

Naturally, if you want to make money with your podcast through a subscription fee, you’ll likely have to use Apple’s Podcasts platform to reach the most people. That means it’ll remain exclusive to a single platform, something that’s been rather controversial in the podcasting world for some time.

Recently, more companies have been betting big on exclusive shows. Spotify, for instance, has been introducing its own content like clockwork and buying podcasts from folks like Parcast and Joe Rogan for millions. However, unlike Spotify, while Apple does have its own podcasts, it’s not charging anybody to listen to them. Instead, it’s giving creators the option to host their podcast exclusively on Apple’s platform and charge a few dollars a month for access.

That sounds like a much faster-growing business model, at least on paper. Apple’s library of exclusive shows could soon lean on how many creators it can convince to give them $20 a year plus a chunk of their revenue.

I’d love to go out on a limb and say people will flock to Apple Podcasts for this, but I simply don’t know. Apple’s success with Apple News Plus has been virtually nonexistent, and paid podcasts are still somewhat foreign to consumers.

How ever things rule out, it’s clear Apple’s putting its money on the paid podcast business as the future of audio-oriented programming. Now, we let time do its thing and see what happens.