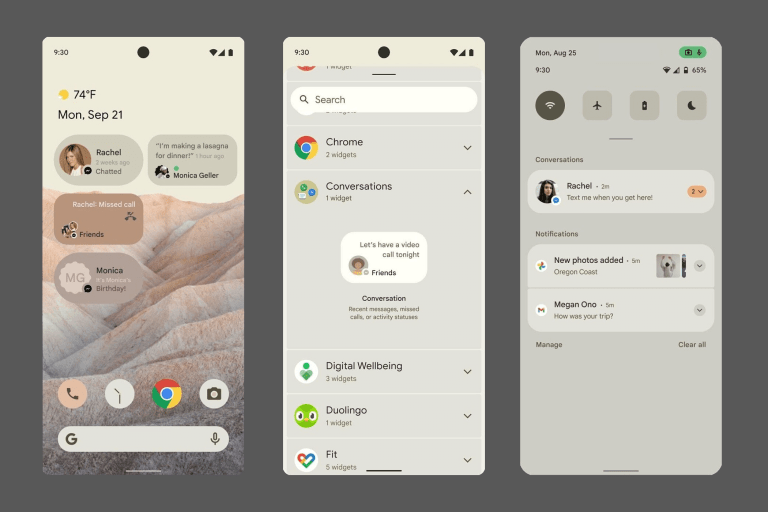 We’ve reached the point in the year when a new major Android update is about to enter beta stages, as has been the case for the past few years. So it makes sense that thanks to XDA-Developers, we’re now getting potentially our first look at the next major release of the OS: Android 12.

The screenshots show off an operating system that’s significantly different compared to Android 11. Right off the bat, the new aesthetic is certainly different. It appears that the UI may adapt to whatever your wallpaper’s primary color scheme is, as you can see on the notification shade, app drawer, camera app, and iconography. I wouldn’t bet that the system ships with this beige color scheme out of the box since…well…it’s pretty unappealing.

Various elements of the home screen experience appear to be getting major redesigns such as the widget picker, now a menu that slides up and shows off much more rounded widgets than before (reminiscent of iOS). The notification shade also gets redesigned with fewer quick settings (four instead of six) and rounder notifications (vaguely similar to Samsung’s One UI). Everywhere you look, you’ll also find much more blank space that presents a cleaner aesthetic.

Android 12 also appears to have a new privacy page which will let you toggle off access to things like your camera, microphone, and location at the system level. A new indicator in the top right of the screen is also here, alerting you if an app is using one those hardware features. It’s said that the indicator might be a requirement for any manufacturer who wants to use Android 12, which means you’ll likely find it on every Android phone running the new OS later this year.

Full disclosure: I would take all of these screenshots with a grain of salt. XDA says it got them from documentation Google was putting together for its partners to make them aware of the changes coming to Android. It’s incredibly unclear if any of these features will be included in upcoming betas, let alone actually ship this fall.

Of course, when the first round of betas are released, I’ll be sure to fill you in on what these screenshots got right and what they didn’t.