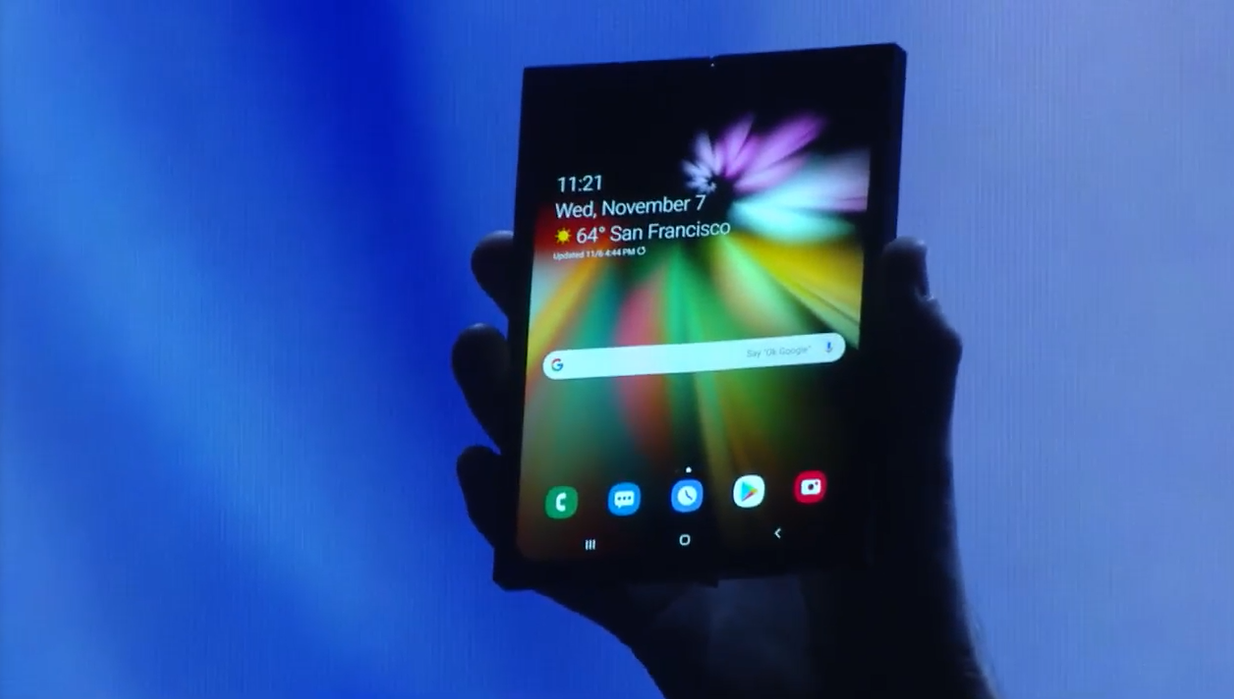 At its developer conference today, Samsung finally unveiled its foldable smartphone it’s been teasing for years. We barely got a glimpse at the device during the keynote since it’s just a prototype at this point, and it definitely looked like one, to say the least.

For starters, we couldn’t see the entire phone since Samsung dimmed the lights to hide the body and design of the device. However, there was enough light so you could see the display, and it did look kind of cool. So on the front, there’s a separate display that shows you all the information you’d expect from a normal smartphone. This screen was admittedly a bit small and oddly placed on the device, but opening the gadget revealed a 7.3-inch panel that was clearly the star of the show. 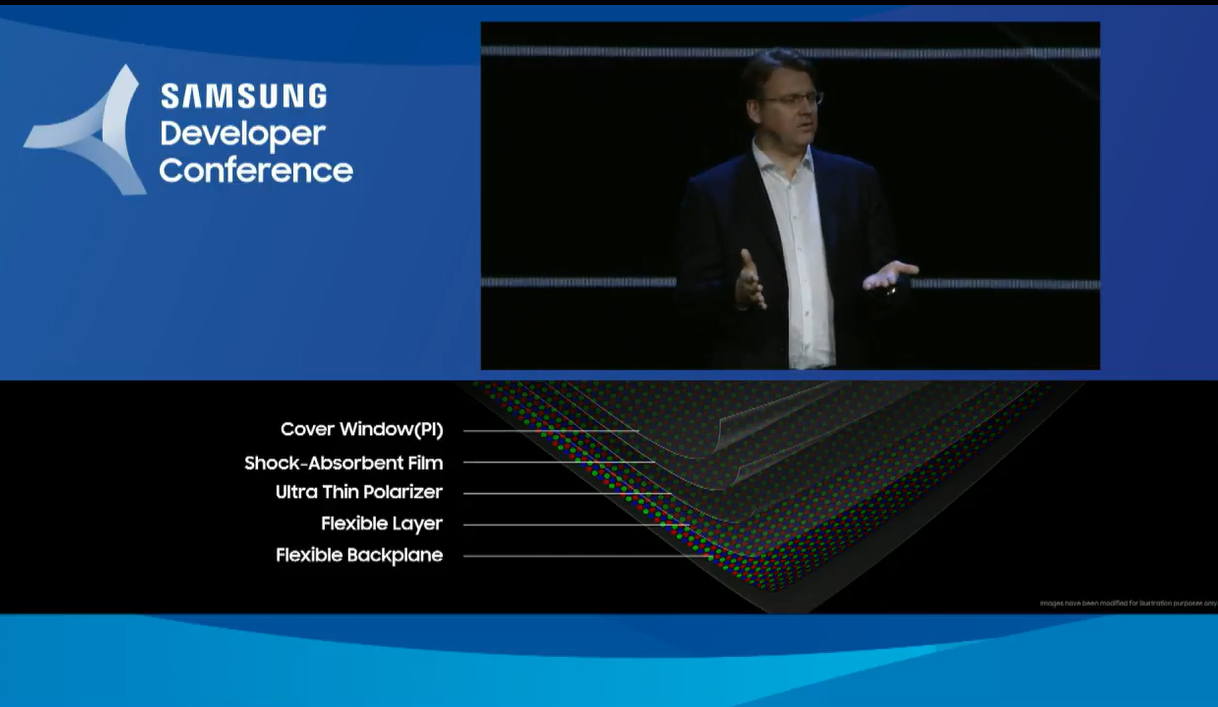 For spec nerds, the foldable screen composes of a flexible OLED panel with a new material Samsung developed that retains flexible components while still being strong enough to cover the display. From the looks of it, you shouldn’t run into any problems with how the display is composed.

As you can see, the device isn’t all that large since it was able to fit in a normal person’s hand. After revealing the device, Samsung said it would allow users to run up to three apps at once on the display without having to switch between them. However, we didn’t get a live demo of this feature since the only interface we saw on the foldable display was the app drawer. 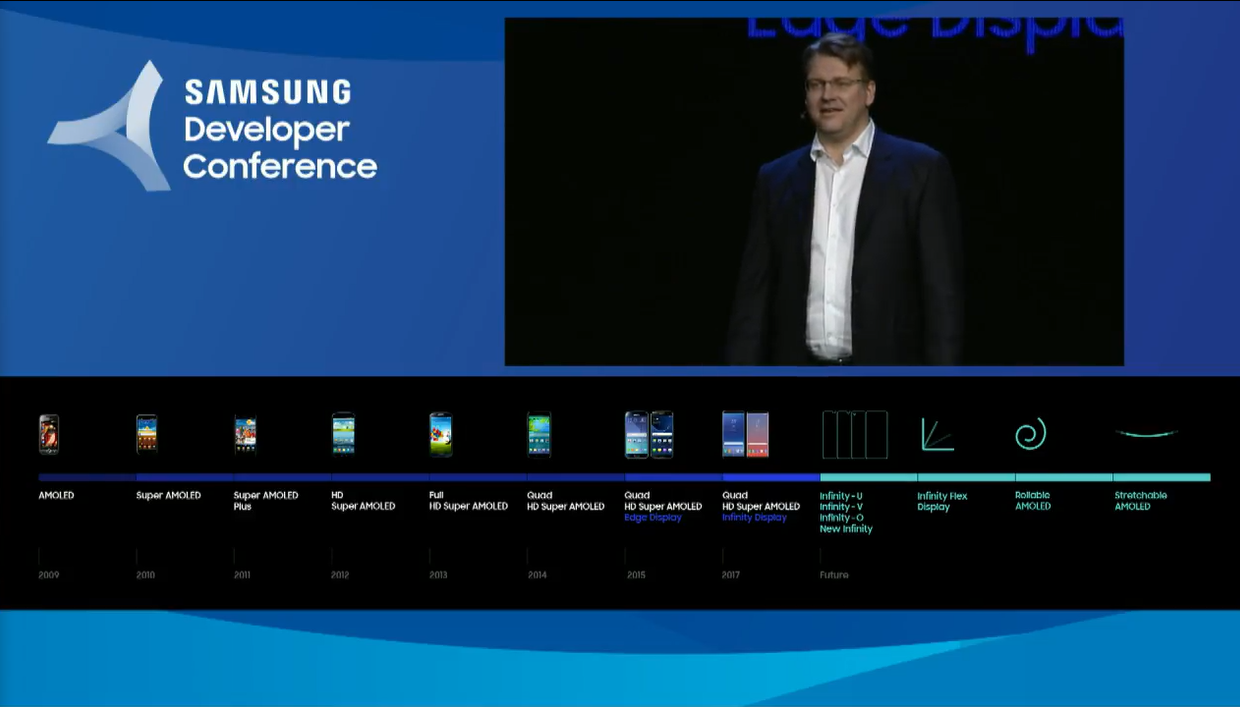 Samsung is calling this foldable screen the “Infinity Flex” screen. It follows the Infinity Display featured on phones like the Galaxy S9 and Note 9. In addition, Samsung will also introduce “Infinity U,” “Infinity V,” and “Infinity O” panels with devices in the future. From the looks of the extremely brief previews we saw on stage today, it looks like a phone with one of the screens will either have a notch or some sort of cutout within the display. However, it’s kind of early to say anything since we aren’t hearing anything official in terms of plans to implement these technologies.

Samsung said thanks to its efforts in developing this technology, flexible displays will be capable of entering mass production in the next few months. That could mean we’ll see a flexible Galaxy smartphone at some point in 2019, but nothing was made official in this regard just yet.

Still, at the end of the day, it’s cool to see Samsung finally debut its foldable smartphone. We’ve been waiting since 2011 when the company originally debuted its flexible screen technology at CES. Now, it looks like we’re not too far away from actually buying phones that include the technology. Of course, we’ll keep you posted if anything comes of these announcements.