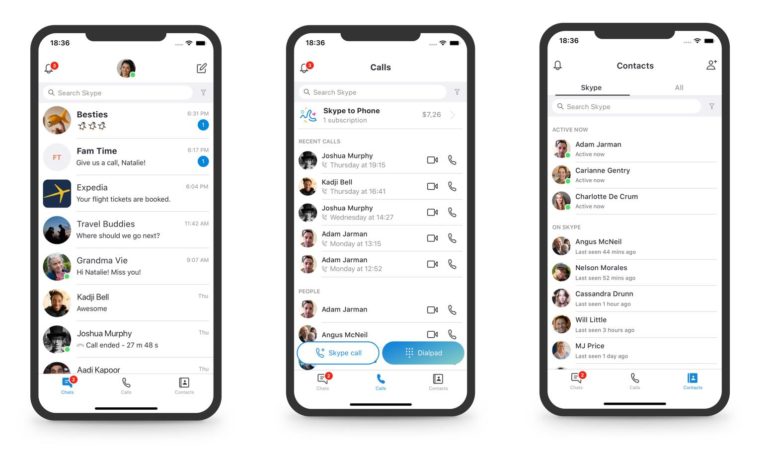 Microsoft has announced yet another redesign of Skype for mobile that removes certain features from the app in favor of more simplicity. According to the company, “maintaining simplicity while enhancing functionality is critical to usability,” hence today’s refresh of the app’s design.

According to Microsoft, Skype will now be simpler to navigate with easier-to-access controls to do things like sending a message or making a phone call. The company also says its removing “redundant and underused features that create clutter.” In other words, it’s removing Highlights and Capture (both a Snapchat/Instagram Stories rip-off) to provide “a cleaner and more efficient user interface.” It’ll also be switching to three buttons at the bottom of the app to quickly access commonly used functions.

Microsoft is also making Skype for the desktop a lot simpler and easier to navigate. Now, you’ll find buttons in the top left-hand corner that let you access common functions, while the entire UI of the app has received a fresh coat of paint with a variety of finishes and color schemes available for your own personalization. Personally, I’m digging that new dark theme.

As you could probably tell by my introduction to this article, this isn’t the first time Skype got redesigned. On our site alone, we wrote three times in the past 15 months about how the app was getting a new look and feel along with fresh features. These weren’t even the only times the app got some type of visual design tweak. Therefore, it’s clear Microsoft isn’t exactly sure what to do with Skype what with the current landscape of social apps dominating as it is. Sticking to what Skype was built upon is probably the way to go, but it’s probably only a matter of time until we tell a similar story about a future redesign of the service.

Microsoft’s rolling out the updated changes to users now.