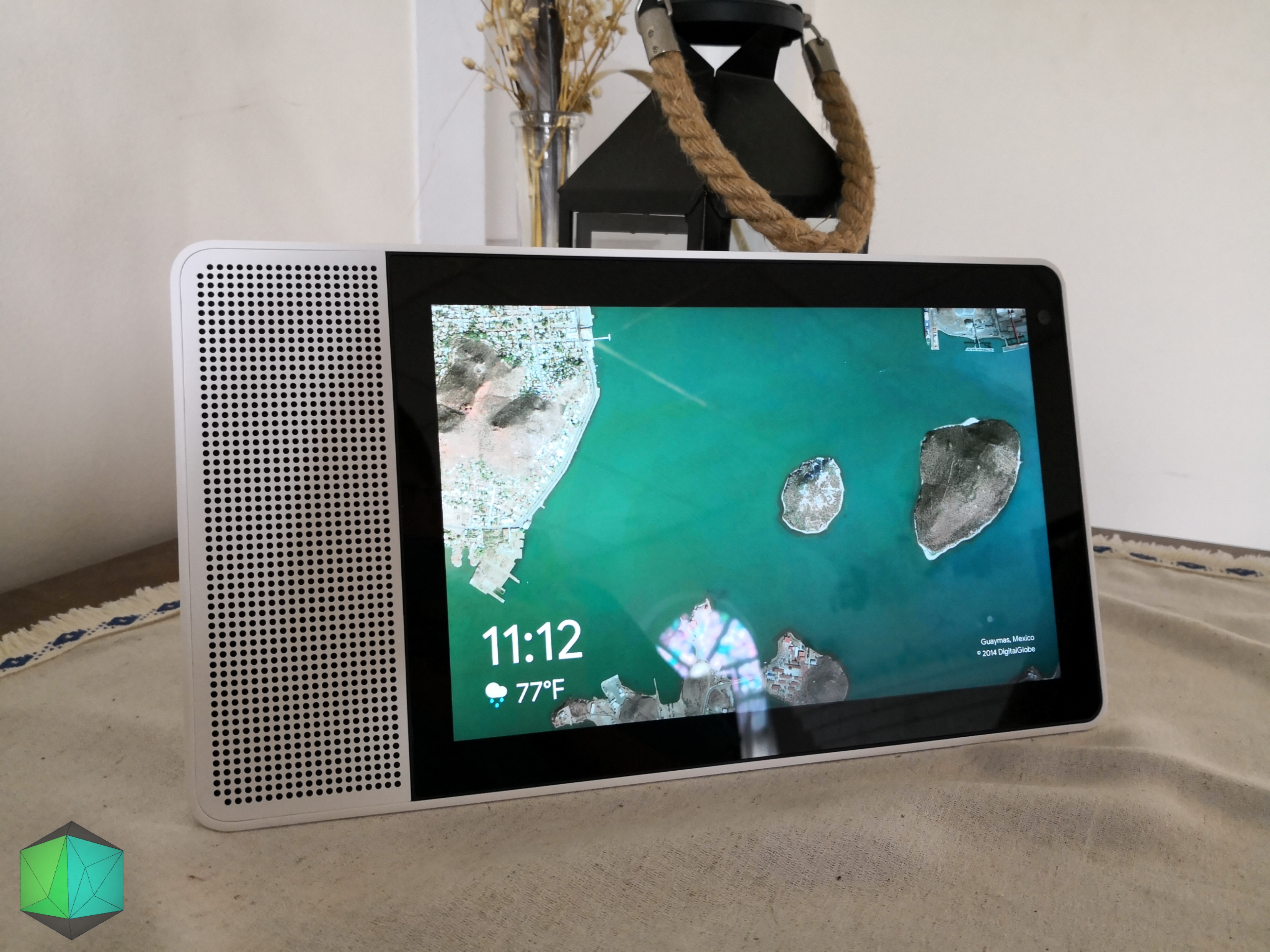 If you recall, back at CES, Google announced a whole lineup of new smart speakers that came with screens. The idea was to give the end user a visual representation of a Google Assistant response, similar to how Alexa works on Amazon’s Echo Show, and allow them to interact with the voice bot in new ways not found on a common smart speaker. They all come powered by the Assistant via Android Things, Google’s operating system for Internet of Things devices. And one of the first speakers to hit the show floor was the Lenovo Smart Display.

Now, I know what you’re thinking, “My god, it’s about time these things came out.” And, yeah, I can’t argue with you there. It’s been seven months since we saw it debut. Thankfully, it’ll finally start shipping tomorrow, July 27th, for $199 or $249.

Why two different price points? Well, because it comes in two different sizes. There’s a small model with an 8-inch screen that goes for $199, while the bigger 10-inch model costs $249. I’ve been testing the latter for about a week at this point and I’ve been able to collect all my thoughts, something I don’t typically do with a one-week embargo. Why you may ask? Because of just how simple it is.

Right off the bat, I’m a big fan of the Smart Display’s design. It features this sort of angular shape that looks super modern and clean. The 10-inch model comes with a bamboo backplate that should blend pretty well with whatever type of aesthetic you have going on, and the cream-colored accents should aid in keeping a low profile among other objects.

On the front sits a large 10-inch screen alongside a front-facing camera and speaker, but we’ll get to that stuff later.

As long as we’re talking specs, however, we may as well run the rest of them down. There’s the Qualcomm Home Hub Platform based on a Snapdragon 624 SoC, 2GB of RAM, 4GB of storage, Android Things as the main operating system, far-field microphones, dual-band Wi-Fi, and Bluetooth 4.2. 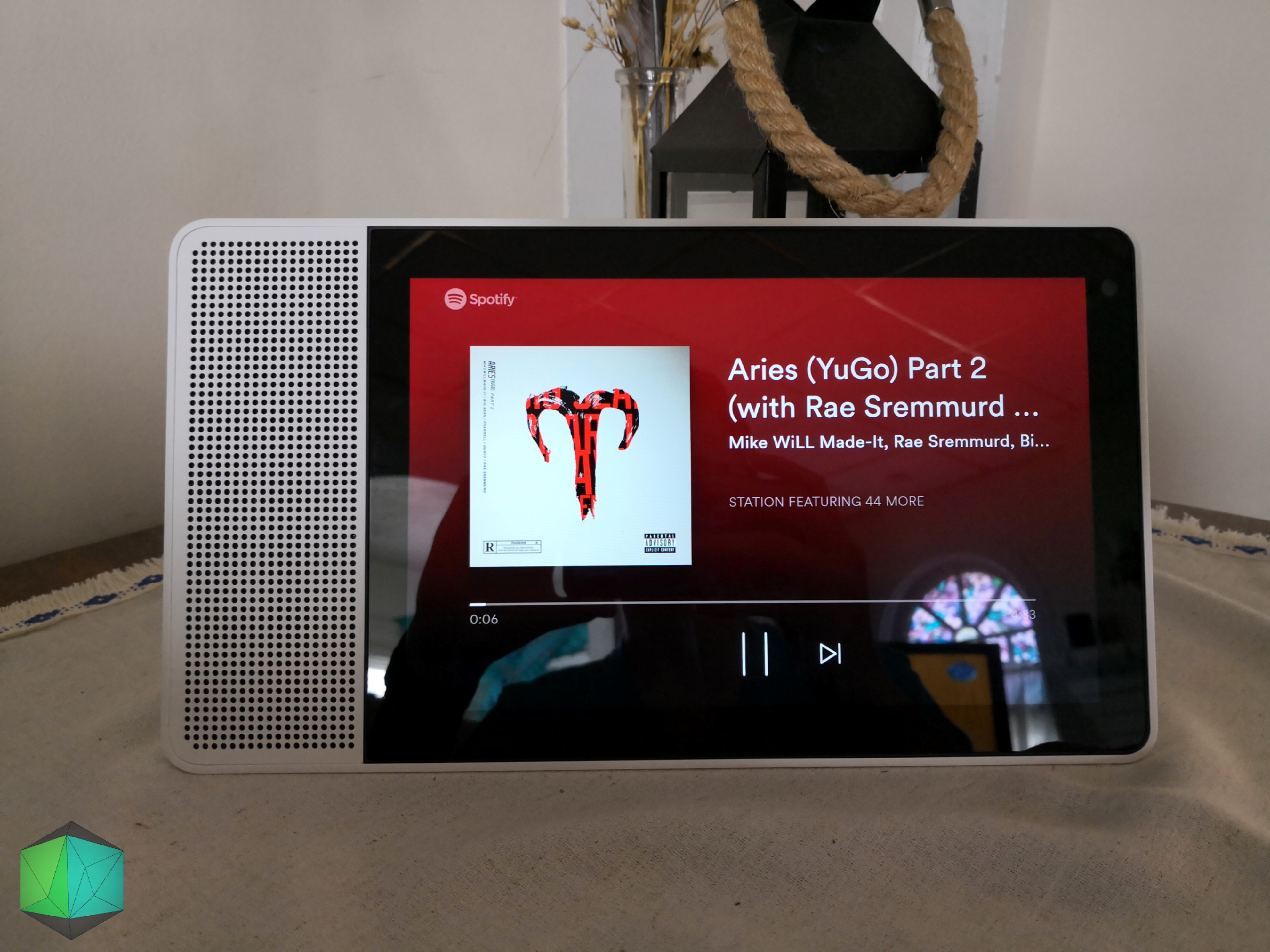 Quite honestly, the specs of the Smart Display don’t exactly matter. In fact, the only thing that really matters is what the device is like to use on a day to day basis. And honestly, it’s really good.

If you’ve ever used a Google Home or a Home mini or a Home Max before, imagine using it with a display attached. That’s exactly what it’s like using the Smart Display. When you say, “Hey Google” or “Okay Google,” the screen gives you a visualization of the Assistant reacting to your command and then presents you with both audible and visual content. It’s sort of like using the Assistant on a smartphone, but way better.

(By the way, the far-field microphones built for summoning the Assistant are also really good. I tested them from around 20 feet away and they worked flawlessly.)

Setting up the Smart Display works the same way as setting up a Google Home. You download the Home app, search for the device itself, and select it once it appears. After that comes a short pairing process, and you’re off to the races. On the first boot, you’ll be taken on a tour of how to use the device so you can become familiar with it. Once that’s over, you can start asking questions.

As far as what you can do with a smart display, Lenovo touts all the usual Google Assistant tricks and trades are present which is good to know. That means you can access one of many Assistant Actions available in Google’s directory, ask for the weather, your calendar, to set a reminder, to play music, the news, it to turn on and off your smart home devices – okay, I think you get the point. But instead of just giving you an audio response, you get to see the Assistant react which is pretty cool.

Exclusive to smart displays powered by the Assistant are a few things. For one, Google lets you look up recipes for virtually anything on the web, it lets you play YouTube videos in a native environment (Amazon!), it lets you watch live TV via YouTube TV, it lets you watch other paid programming from providers like HBO and Cinemax, it lets you watch your daily briefing instead of just listening to it – there’s a ton of useful commands that are just better when you have a screen. 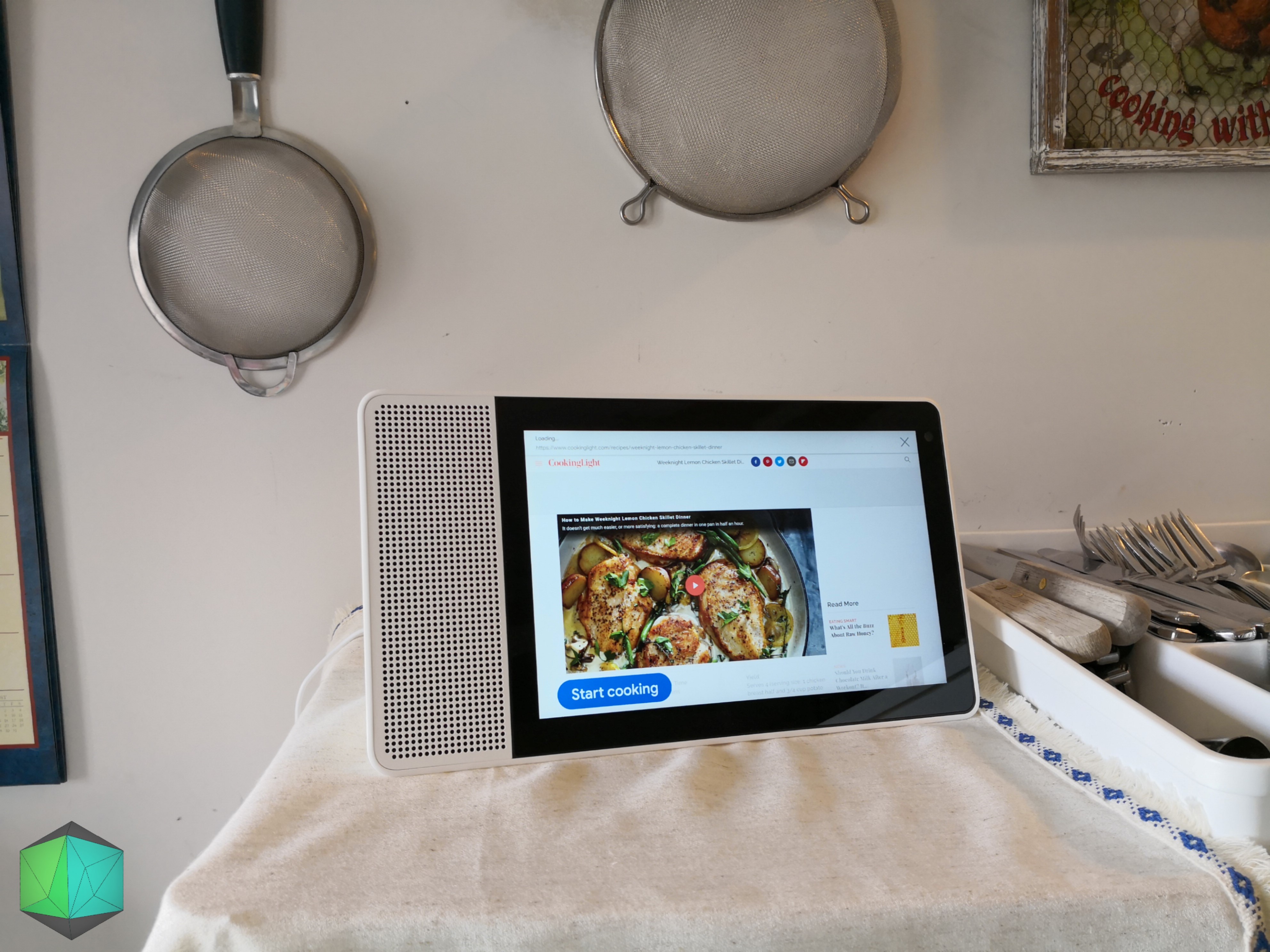 And, at least for me, this is clearly the better route. Whenever I ask the Assistant something with Lenovo’s Smart Display, I’m always reminded just how convenient having a large touchscreen to interact with is. It’s even become a little desk companion that I use every day. Plus, I don’t have to shout every command at it like I would if it were just a speaker. I can say “Hey Google, play Bobby Tarantino II on Spotify” and watch it open Spotify and play that album. Later, I can pause the music and play it back whenever I want with the on-screen controls which, arguably, is way better than saying “Hey Google, pause” or something similar. 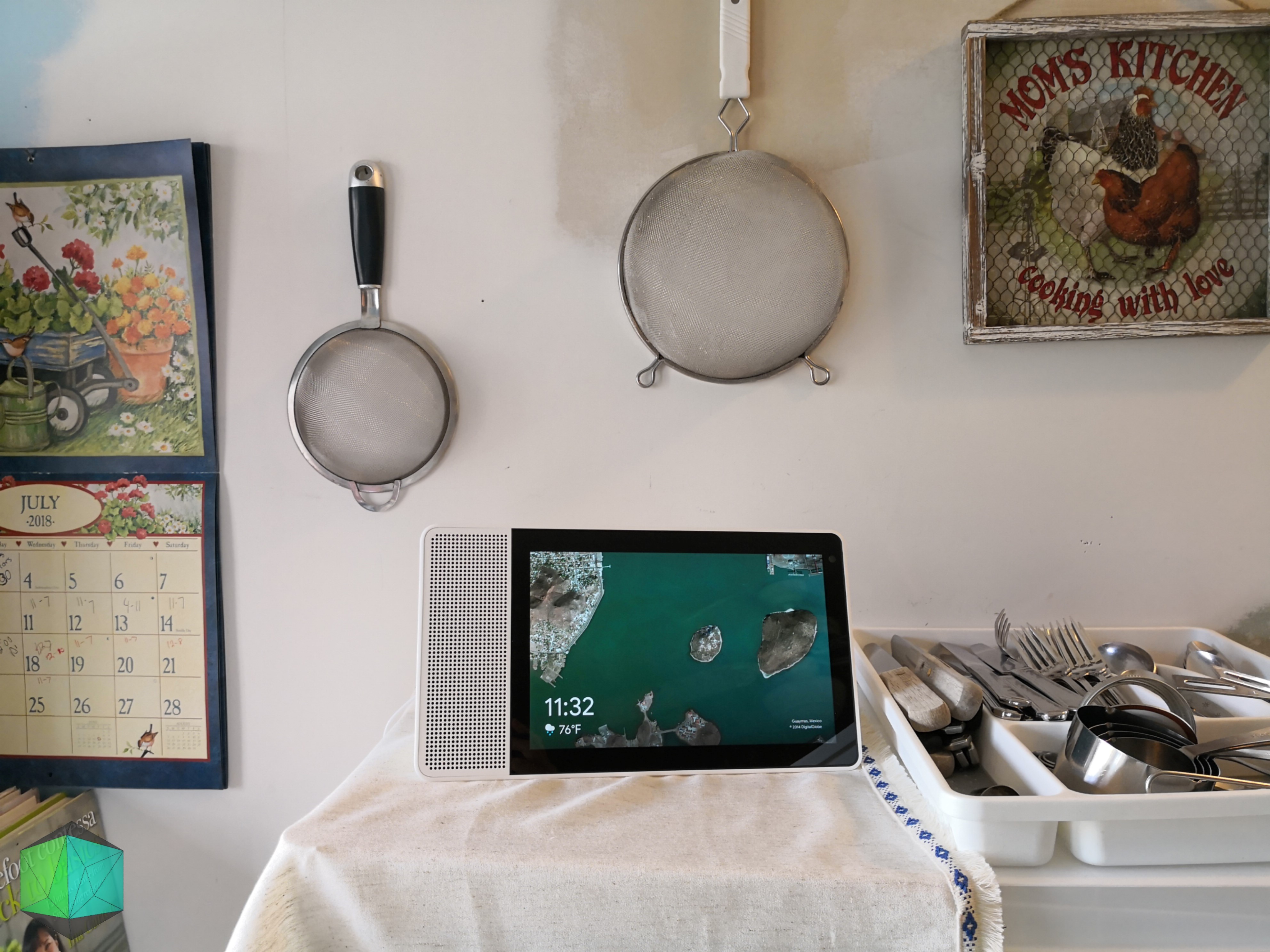 Speaking of on-screen controls, actually using the Smart Display as, well, a smart display is a pretty good experience. Google did a nice job with the software on the device since it’s clean, snappy, and simple to use. All of your navigation is done from one simple menu that appears after you tap the main clock interface. From there, you can access tips and tricks, your calendar, reminders, the weather, and more. To go back to the clock interface or any previous UI, you swipe from the left edge to the right. To access quick controls, you swipe up from the bottom. That’s pretty much it, besides the usual scrolling and tapping gestures around the rest of the system.

Because of how easy it is to learn how to use an Assistant-equipped smart display, I can’t imagine anybody regretting buying one. And yeah, I know, I should’ve saved this remark for the end of the review, but it’s true. The speakers could absolutely blow and the screen could be small and pixelated, but the software and simplicity surrounding it would make up for those downfalls and create something I’d have no problem recommending.

Luckily, neither the display or speakers are terrible. On the contrary, they’re both fabulous. The 10-inch LCD IPS panel on the Smart Display is nice and vibrant and gets pretty bright. It has a resolution of 1920×1200 so it’s nice and crisp. Plus, it isn’t easy to see individual pixels, especially since you probably won’t be looking at the screen from very close distances. 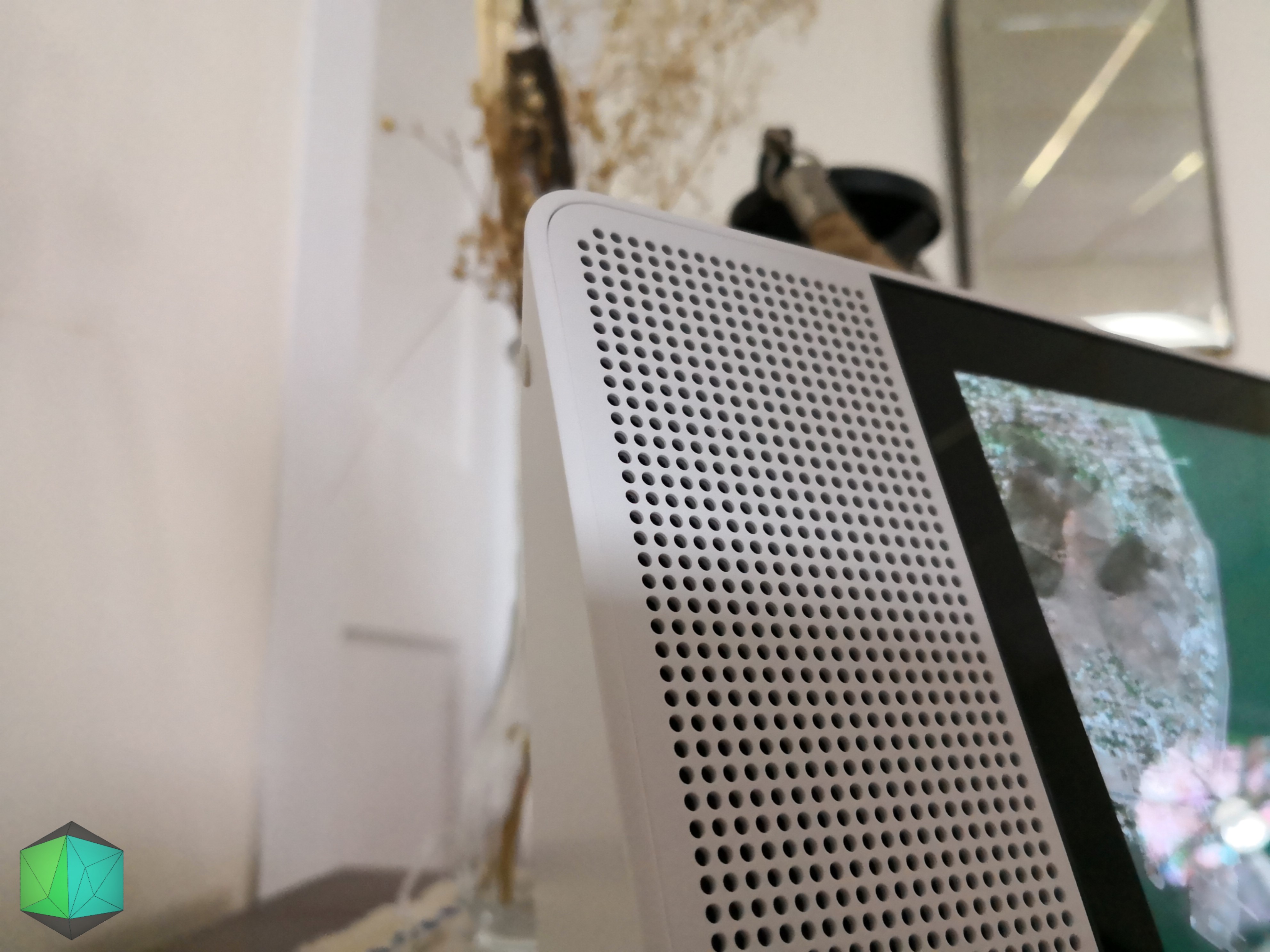 As far as the speakers go, there are two 10-watt units mounted to the front of the device with the rest of the build being used as a resonance chamber. I’m no audiophile, but I find the speakers to be absolutely excellent. They get really loud (like, blow-your-ear-drums-out loud) and offer a ton of bass for even the most dedicated hip-hop fans to get goosebumps over. I listened to a lot of rock during my testing and was able to hear everything from the guitars to the backup drummers clearly and without issue.

As a sidenote, if I may recommend an album to listen to on this guy, Logic’s The Incredible True Story should prove to be a pretty sweet listening experience. You’re welcome. 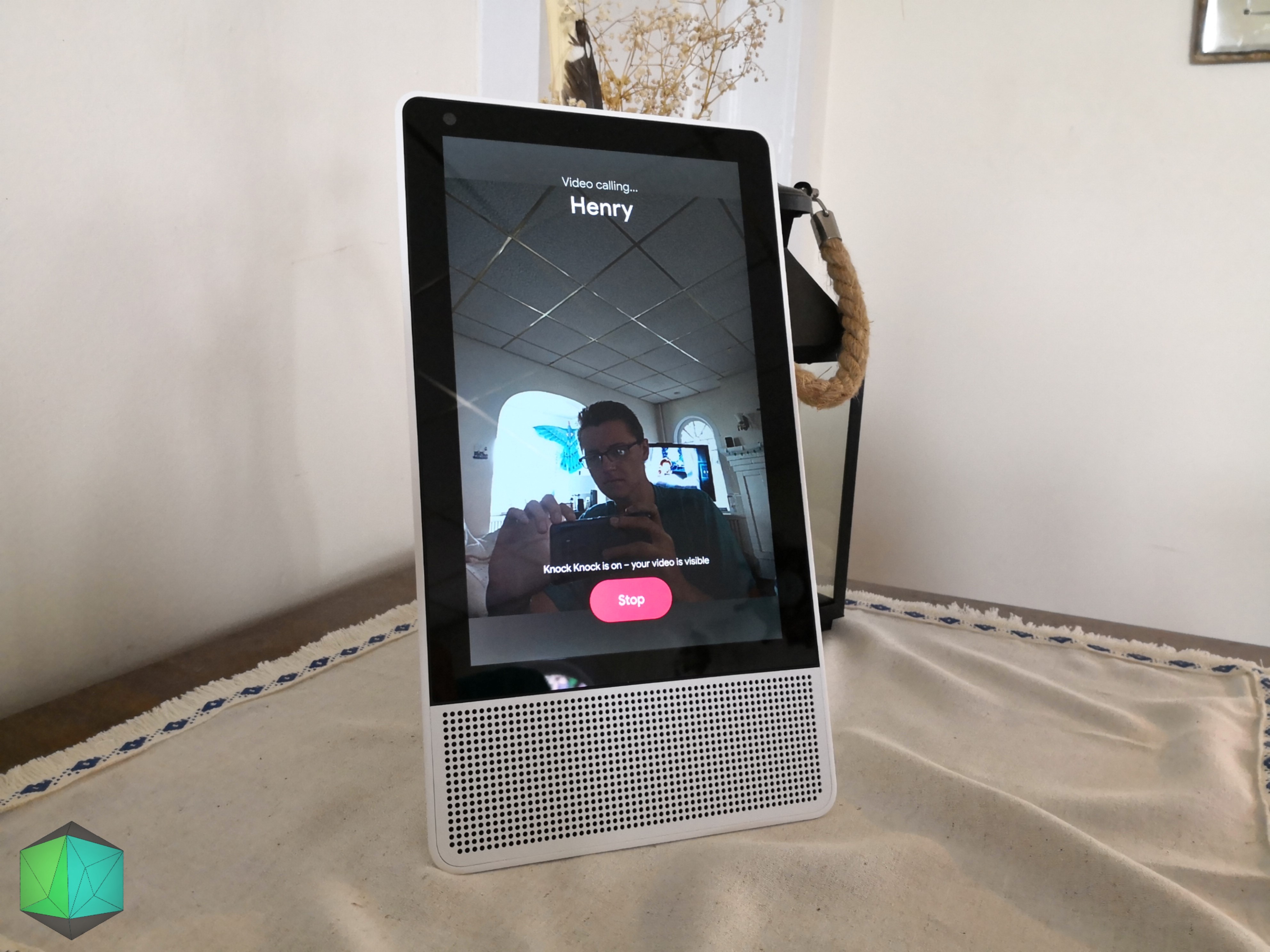 Now, of course, it’s pretty obvious the screen on the Smart Display is surrounded by chunky bezels. I was never bothered by them and, thankfully, they serve a purpose rather just sticking around for no reason. To the right of the display is a front-facing 5MP camera that can be used for placing video calls to your contacts via Google Duo. So long as you’re signed up for Duo, you can video chat with anyone who has an Android or iOS phone and the app installed. I tried it a couple of times and, sure enough, it works great. It also works regardless of whether you have the device placed vertically or horizontally which is a nice touch.

Also worth noting is the inclusion of phone calling from the Smart Display. The same way you connect your Duo number, you can connect a phone number to the device and use it to make actual phone calls. I’ve tried a couple of times with my Google Voice number and it worked really well. It’s a convenient feature if you wanna put your phone on speaker but hate the way it sounds. 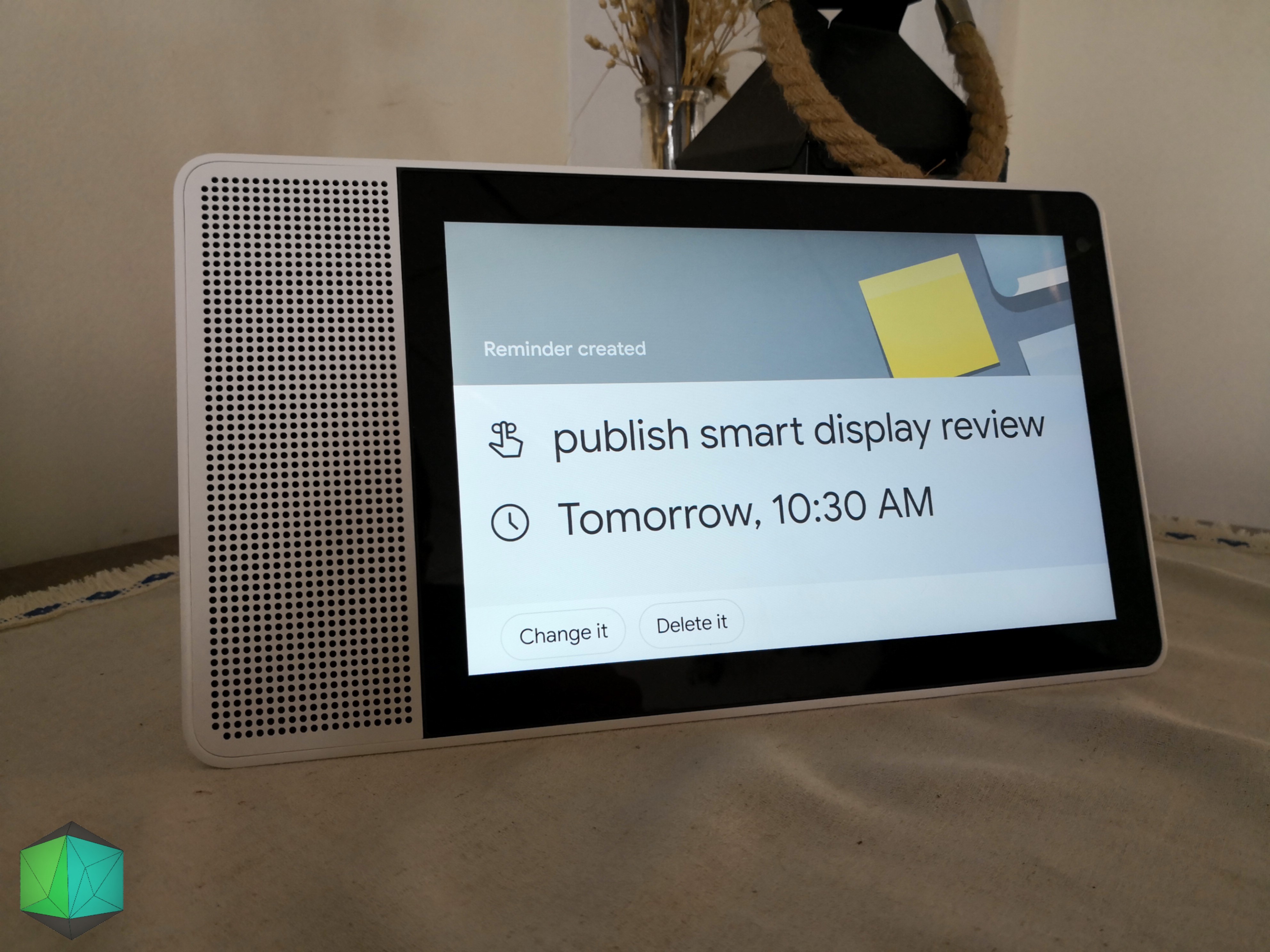 I remember an acronym my parents used to tell me that demonstrated how they would go about compiling their menus for their various restaurants: K.I.S.S. That stands for “keep it simple, stupid.” During my time with the Smart Display, this is what kept coming to mind. The simplicity and elegance of the device stuck with me, and when I put my thoughts down into words, I realize just how much of a fan I am of this smart home gadget.

In the end, Lenovo’s Smart Display is convenient, useful, handy, and best of all, simple. If you currently have a Google Home or other smart speaker without a display, the Smart Display will prove to be a nice upgrade. Is it worth $249? I think so. When you have the Echo Show going for $229, it can seem a bit odd to spend $20 for something that does essentially the same thing. But when you consider you’re getting a nicer screen, a better build, and integration with all of Google’s services, Lenovo’s offering seems pretty tempting. 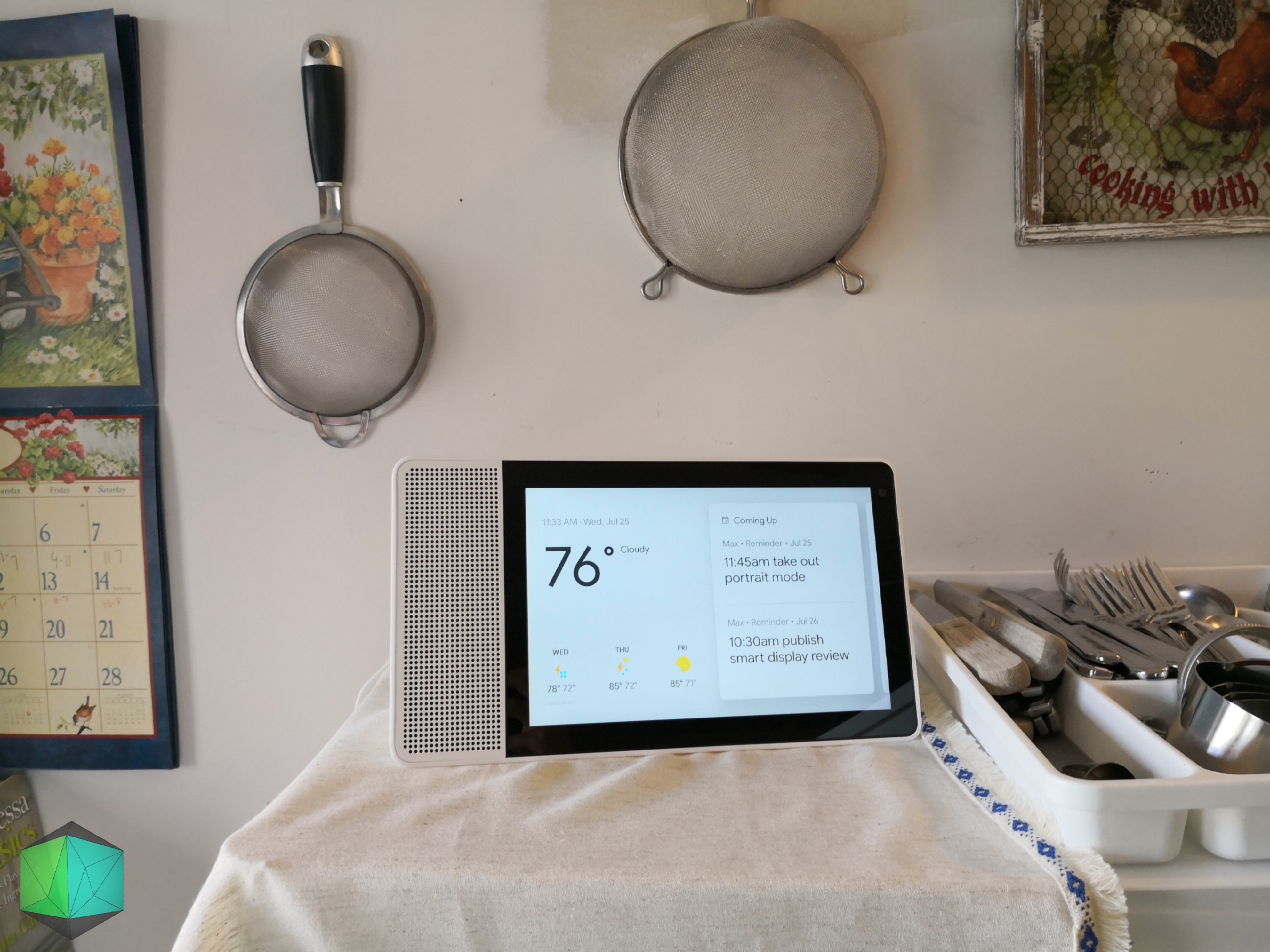