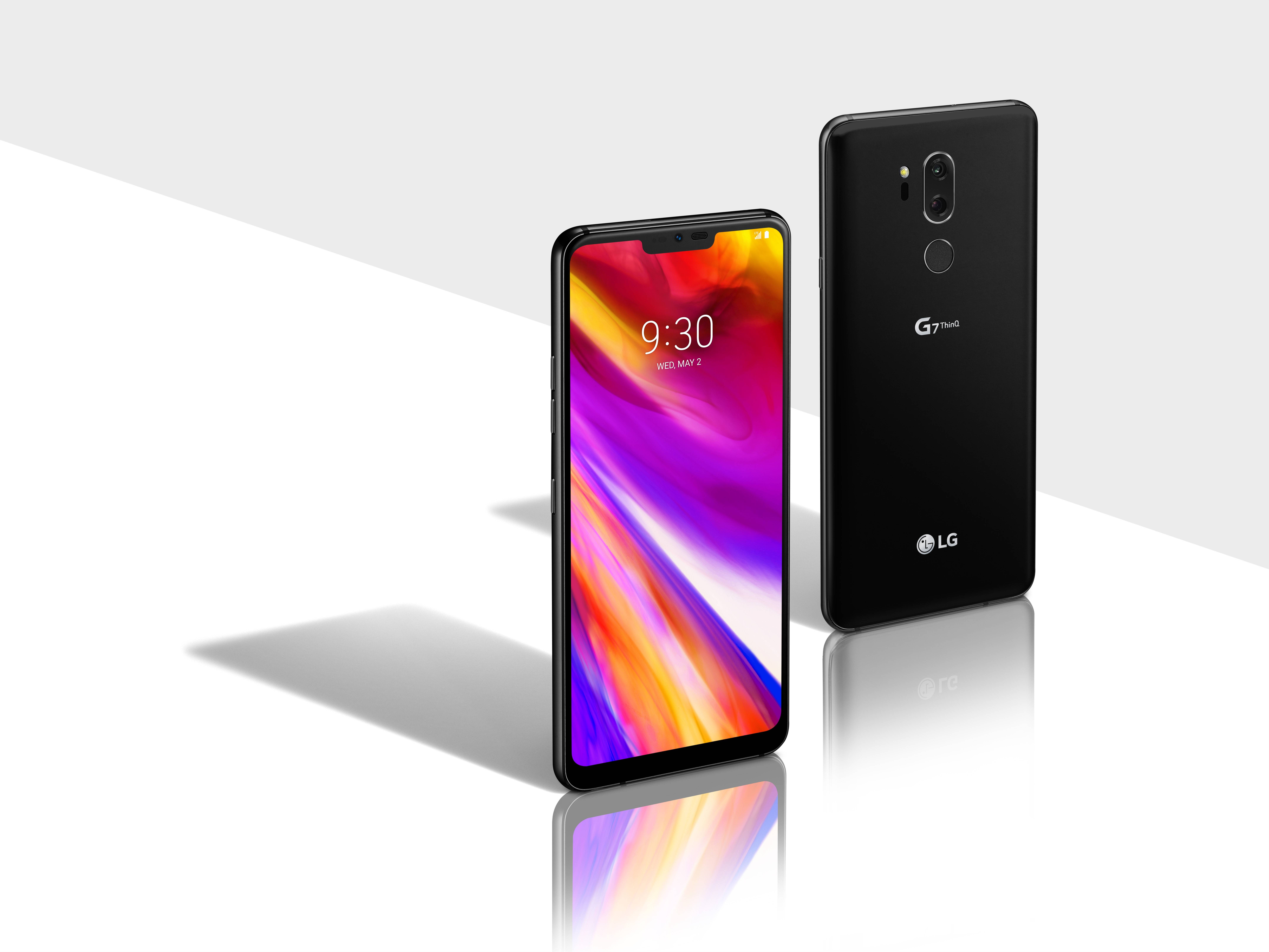 After many rumors and reports surrounding the device over the past few months, LG has finally unveiled the G7 ThinQ in front of a crowd at an event in New York. The device marks the seventh entry into the company’s G series of smartphones which was previously said to have been canceled. Obviously, that didn’t happen, but LG internally was ready to give up on its name.

Without going too far into it, LG ultimately decided to name its 2018 flagship the G7. You’ll also notice the ThinQ brand name attached to the device’s title which indicates this phone packs in LG’s artificial intelligence features. If you recall, the V30S has the same name and includes AI tools in the camera app. We’ll get to what the G7 features later.

Let’s start with the design. LG went with an all-glass approach for the G7 and included an aluminum frame around the sides of the phone. The sides look a bit more squared off than what we’re used to seeing with LG’s other phones like the V30 so expect the device to be easier to hold in your hand. 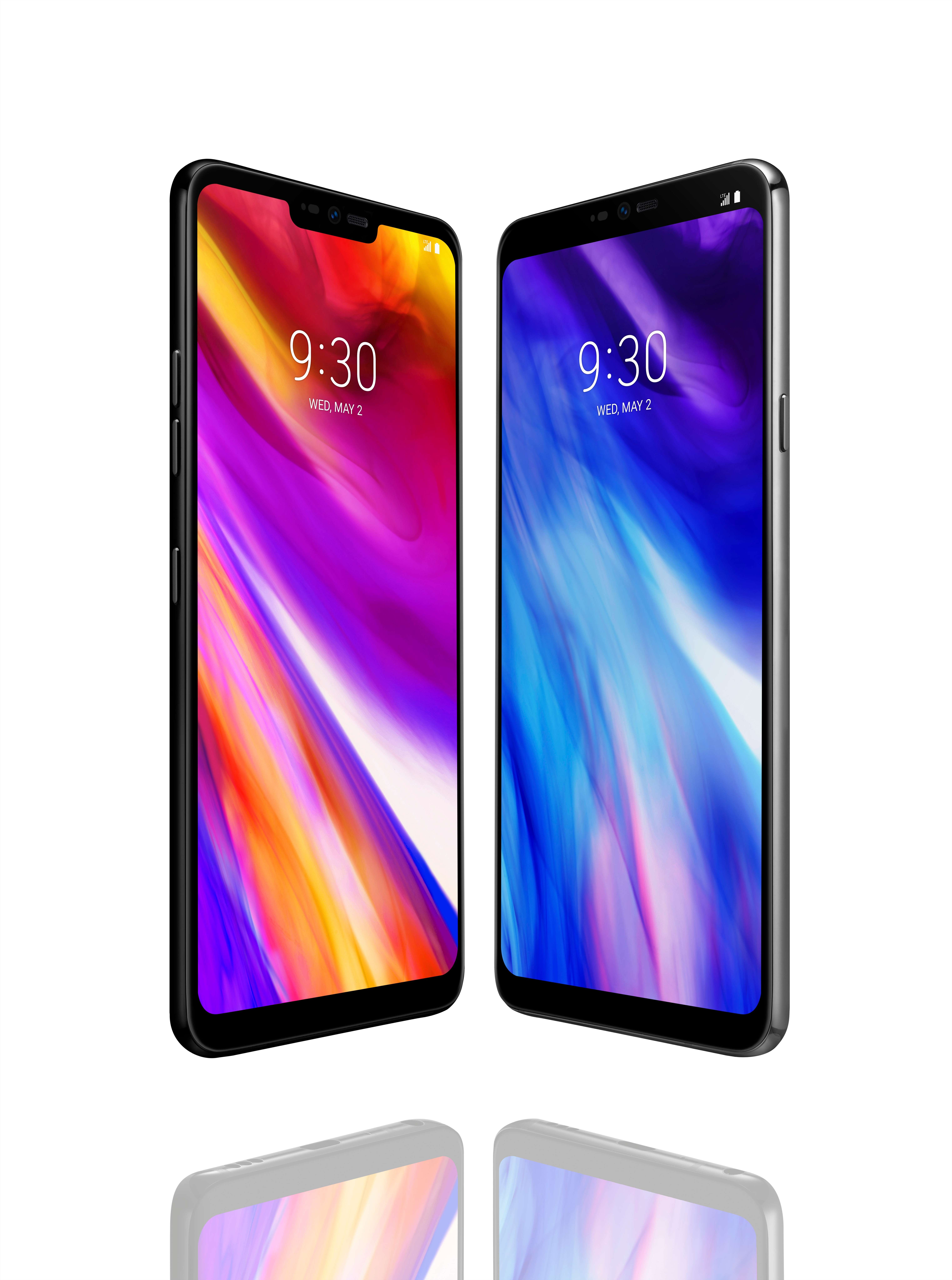 As is the case with many of LG’s phones, the G7 is IP68 water resistant and passed a MIL-STD 810G complacent test for improved drop protection. The glass design also enables wireless charging which is a common standard across many phones nowadays.

On the right side of the phone, you’ll find a power button. In the past, LG would incorporate the power button into the rear-mounted fingerprint reader. While the reader is still present, LG decided to make powering on the G7 a bit easier by adding a simple side-mounted power key. This should help with things like viewing your notifications while the device sits on a table since you won’t have to pick up the device to access the button.

You’ll also find another new key on the left side below the volume buttons: an AI button (hence the ThinQ brand). According to LG, the G7’s AI key will activate the Google Assistant with a single tap. If you recall, Samsung’s Galaxy S8, Note 8, and S9 all do something similar: with a tap of their devices’ AI keys, you activate Bixby. Clearly, LG’s approach looks to be more useful since, well, the Google Assistant is a lot better than Bixby.

But that’s not all. If you double tap the key, Google Lens will pop up. If you’re unfamiliar, Lens is Google’s object recognition feature that comes built into Google Photos and the Assistant itself. It can help identify objects, creatures, landmarks, and more simply by having you hold your phone up to something or by scanning a picture you took. Up until now, there hasn’t been a quicker way to access the feature so perhaps Google will see Lens grow thanks to the shortcut.

Additionally, long pressing the side key will let you talk to the Assistant. 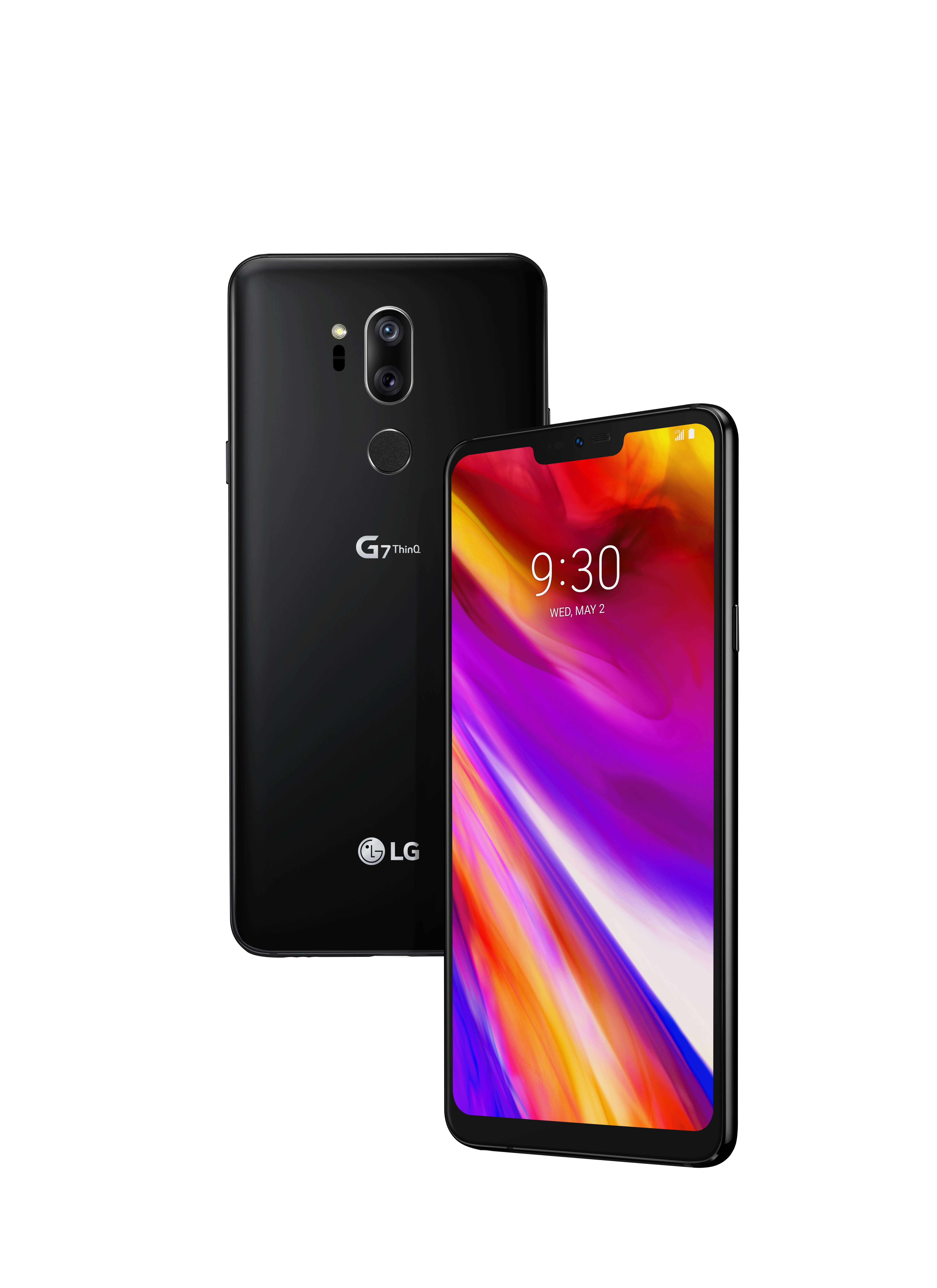 Moving on, the front of the G7 houses a 6.1-inch display with a resolution of 3120×1440, one of the highest resolutions in a smartphone to date. It’s compatible with Dolby Vision and HDR 10, although it does use LCD technology and not OLED. To be honest, I have no idea why LG opted for an LCD screen since last year’s V30 featured an OLED panel. Maybe they want to save their “cinematic displays” for its V series? I’m really lost here.

Anyway, the display shares a couple of similarities with a certain $1,000 Apple smartphone. It uses a 19.5:9 aspect ratio which is the same as the iPhone X and even includes a notch cut out at the top. I know what you’re thinking, “WHY LG?!” Well, it’s 2018. That should be reason enough to include a notch. Everyone else is doing it, after all.

Inside the notch, you’ll find an earpiece, front-facing camera, and ambient light sensor. According to LG, the G7 will let users hide the notch with software tweaks in the Settings app. They’ll even let you customize it by changing the color of the notification bar. LG calls it the New Second Screen due to the actual second screen being left behind on the V20. Of course, the notch won’t provide the same level of utility, but at least you can customize it to your liking.

As a final note on the display, LG says the G7’s screen can reach up to 1,000 nits of brightness. That’s really bright, although we’re not sure whether you’ll need to have auto brightness on while you’re in direct sunlight to use the feature or if you can activate it manually. We’ll have to get our hands on the device to determine this so stay tuned.

Okay, time for specs. The G7 is much like any other flagship in 2018 as it comes with a Snapdragon 845 processor, 4GB of RAM, 64GB of storage, and a microSD card slot. A G7+ model will be sold that comes with 6GB of RAM and 128GB of storage. Android 8.0 Oreo serves as the base of the software with LG’s UX on top.

It’s also not an ordinary headphone jack. LG decided to go with a 32-bit Hi-Fi DAC much like what’s featured in the V30. However, this one has been upgraded as the device now supports DTS:X which brings 7.1 3D surround sound effects to the device, a first for any smartphone. No doubt, when listening to music with any type of headphones, your jams will sound a lot better.

Also sitting on the bottom of the G7 is a loudspeaker which LG calls the “Boombox” speaker. According to the company, the speaker uses a special resonance chamber design that basically utilizes the entire phone’s body to provide more volume and more bass. LG says the device raises the base sound level by 6dB and pumps out twice the amount of bass you’d normally find. The handset also apparently works especially well when you have it set down on a solid surface such as a table or desk. Of course, we’ll need to test the device in real life to determine whether this actually makes a difference so stay tuned. 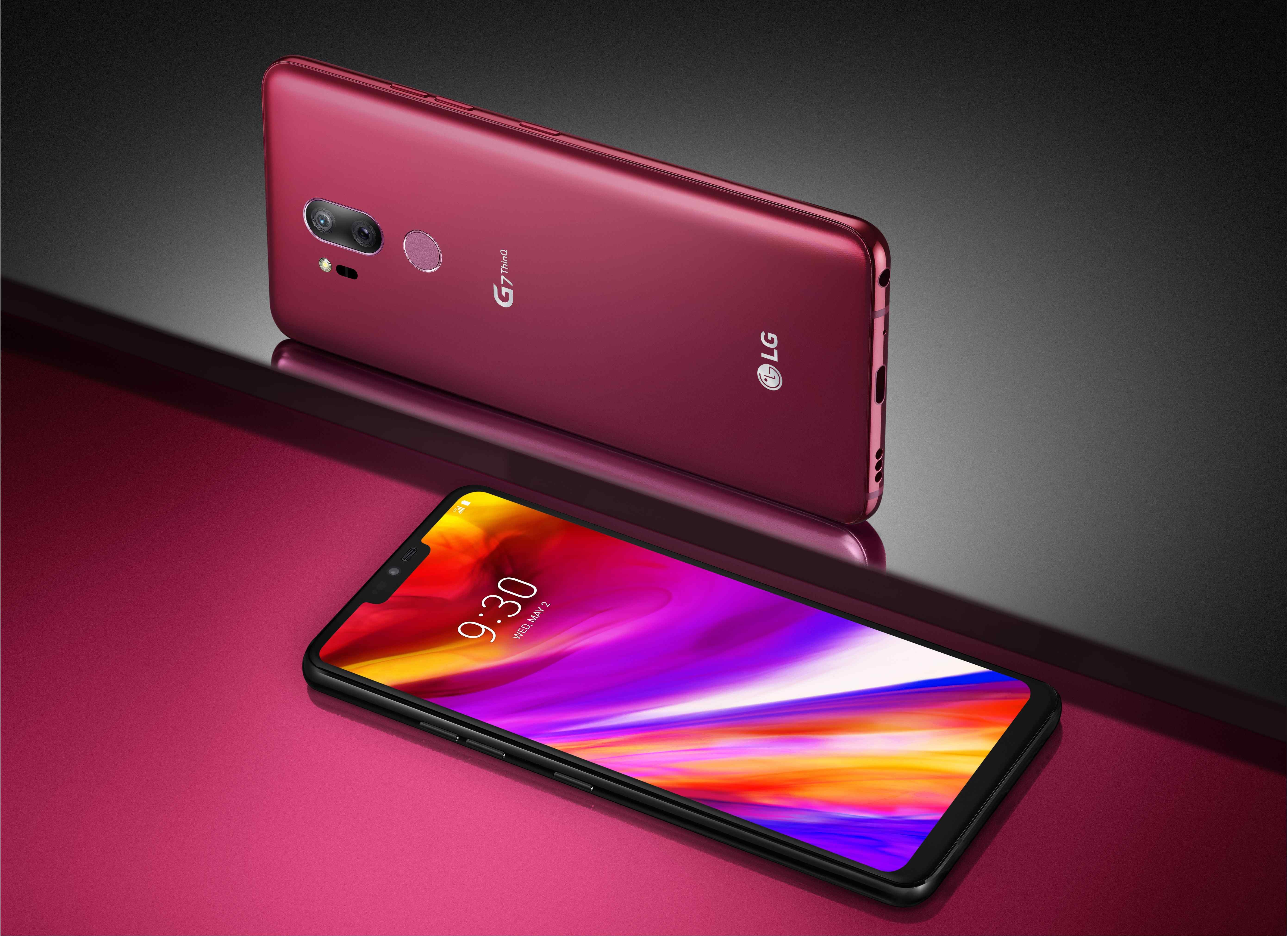 As for cameras, LG is utilizing dual 16MP shooters on the back. One sensor stands as the main shooter with an f/1.6 aperture while the secondary features a 107-degree wide-angle lens with an f/1.9 aperture. The phone features optical image stabilization, phase detection autofocus, and an LED flash. It can record videos in up to 4K at 30 frames per second and take portrait photos with either sensor.

Of course, since it’s LG, there’s a bunch of different tools you can use to get the perfect shot. The G7’s camera app features a pro mode to adjust the image to your liking and utilizes the same AI techniques we saw in the V30S. This time around, LG’s AI Cam features 19 different modes (up from eight) to adjust things like brightness, saturation, contrast, and shutter speed based on what the phone detects you’re looking at. In our testing, the V30’s AI Cam only does a bit of touching up to photos before they’re taken so it’s unclear how well the G7’s approach at this technology will stand.

Additionally, the G7 features an 8MP wide-angle selfie camera with an f/1.9 aperture. 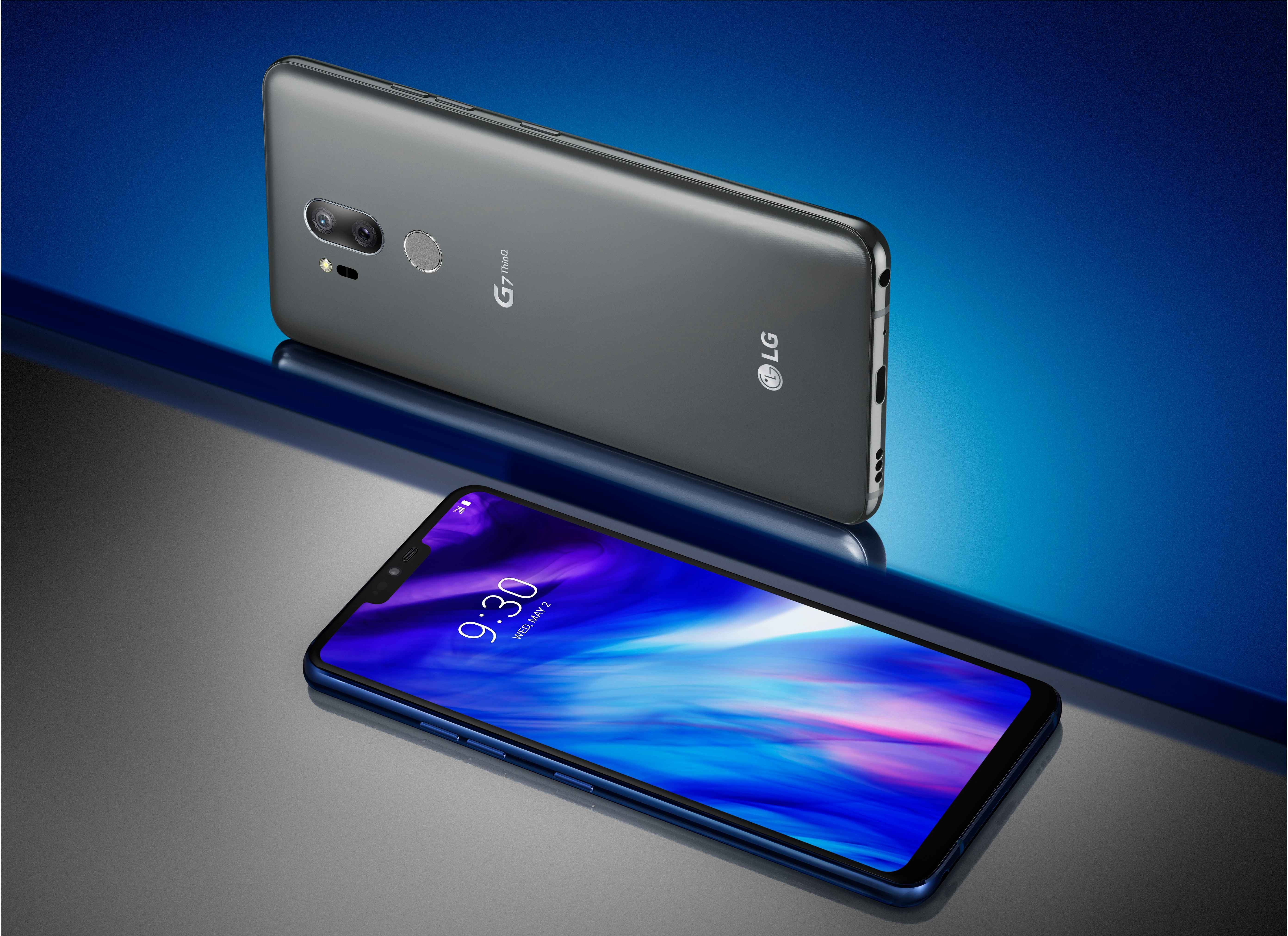 With all of this being said, it’s unclear just how well LG will communicate the G7 to its customers. The company has been struggling in the smartphone space for some time now. They had a hard time getting G6 units out the door and there’s a good chance it was a similar situation with the V30. Hopefully, the company brings the phone to market as a serious contender to the Samsungs and Apples of the world. Otherwise, we’ll be having the same conversation in another year.

“The LG G7 ThinQ is strongly focused on the fundamentals and its launch marks a new chapter for our company,” said Hwang Jeong-hwan, president of LG Electronics Mobile Communications Company. “Through the combination of personalized and useful AI functionalities with meaningful smartphone features, this is LG’s most convenient smartphone yet.” 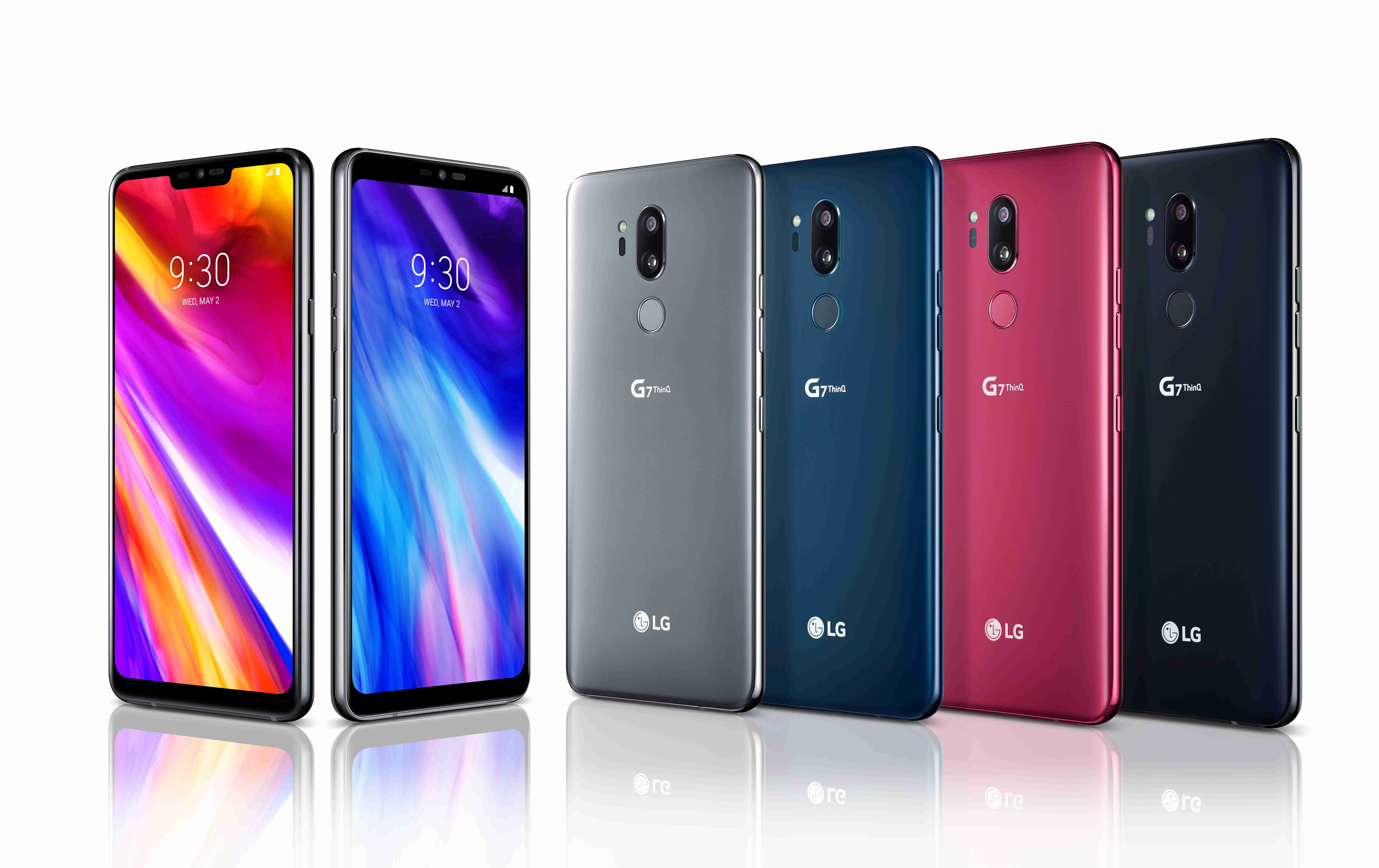 The LG G7 ThinQ will be sold in Platinum Gray, Aurora Black, Moroccan Blue, and Raspberry Rose. Pricing and availability has yet to be announced but we expect more information in this regard very soon.