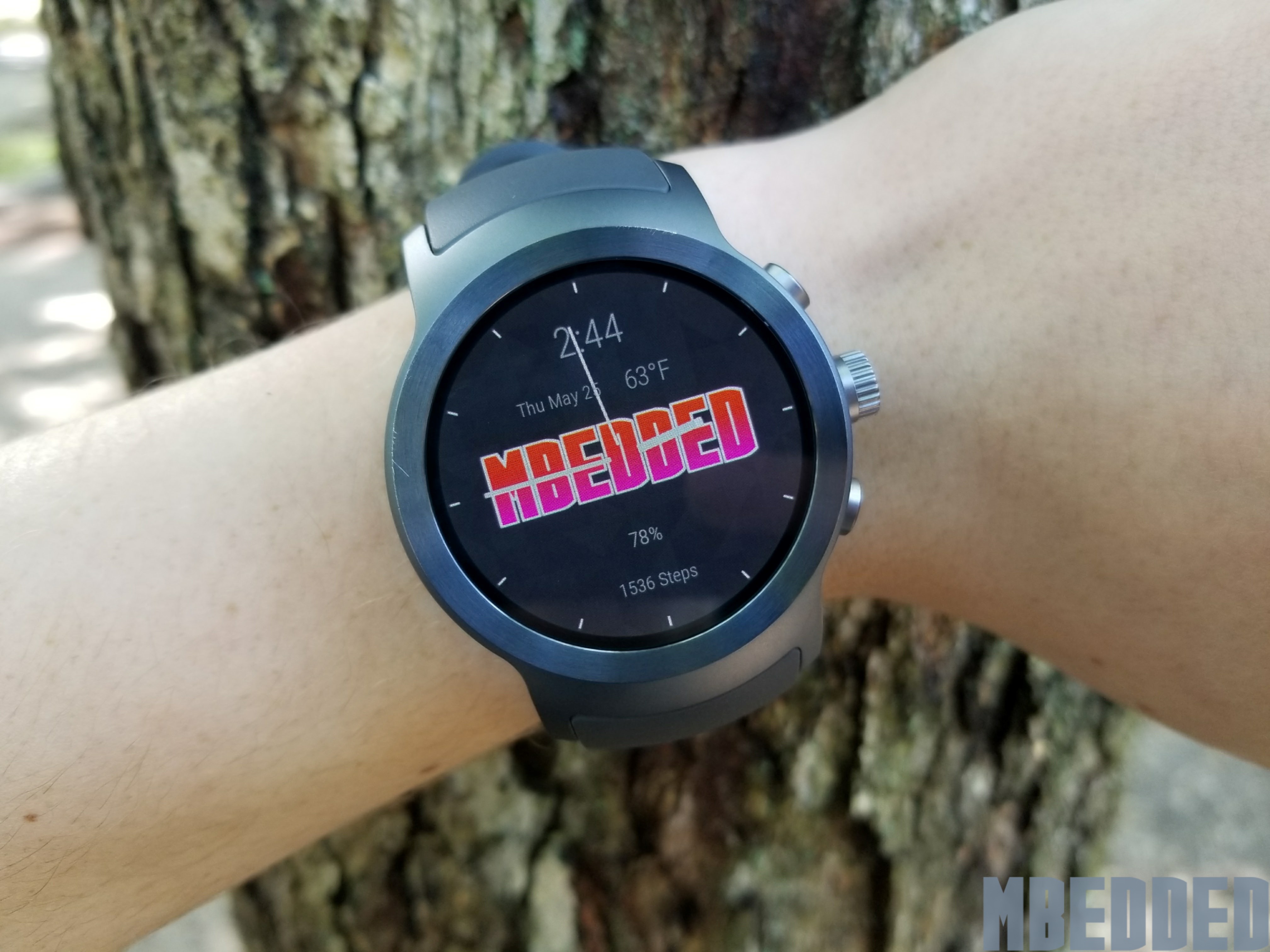 Earlier this year, LG partnered with Google to deliver the first set of smartwatches powered by the latter’s Android Wear 2.0. The watches, simply called the LG Watch Style and Watch Sport, each have their own set of features. The Watch Style has a slimmer body and interchangeable bands, while the Watch Sport has basically everything the Style doesn’t: a chunky body, no interchangeable bands, NFC for Android Pay payments, LTE, a bigger battery, and better overall specs. Today, we’ll be taking a look at the latter wearable and see if it’s worth buying. 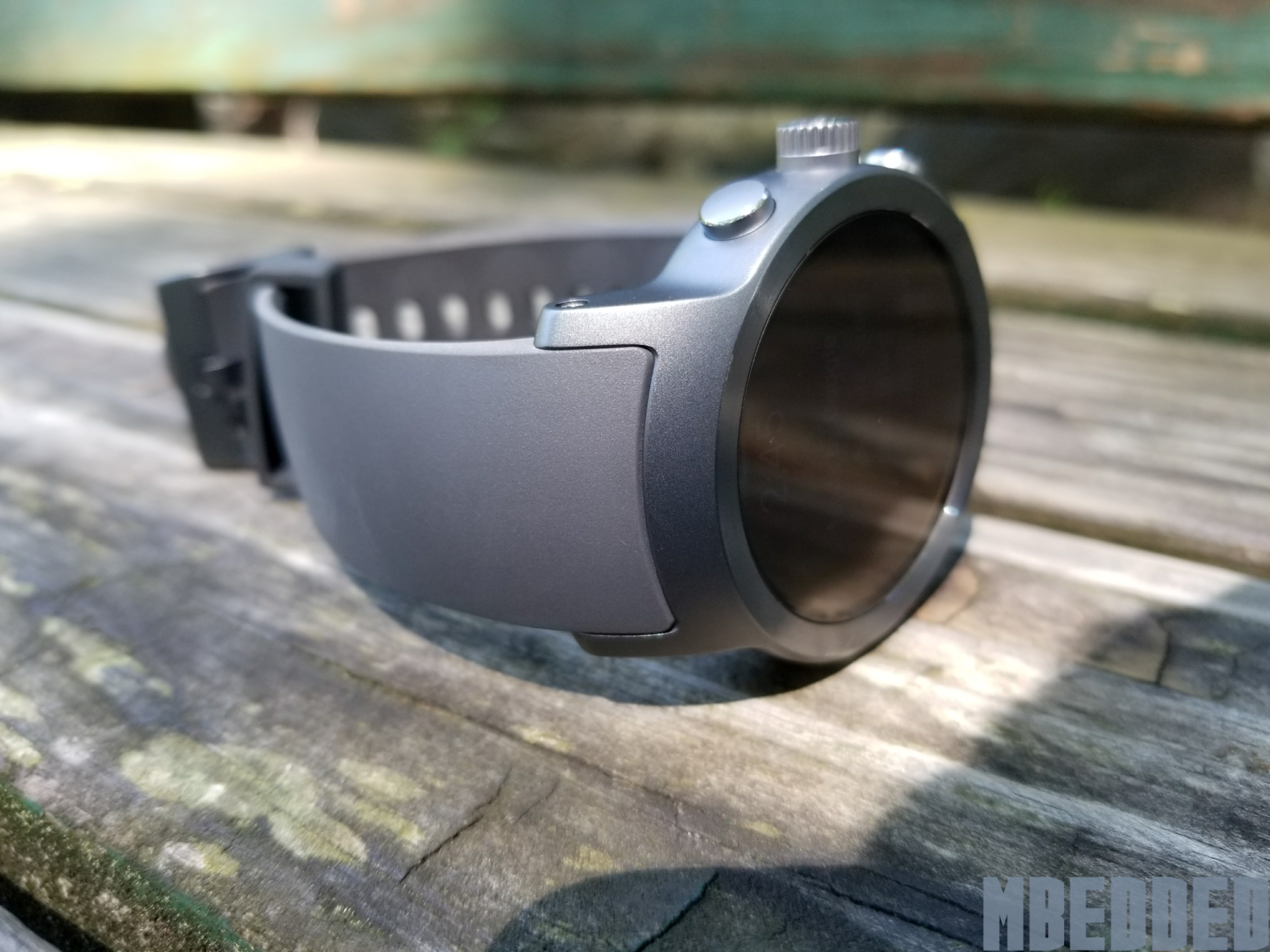 At initial glance, the first impression you’ll get is just how thick the all-stainless-steel Watch Sport is. I mean, this thing is huge. It’s also pretty heavy which doesn’t exactly make sense for a Sport watch. This, along with its thickness, doesn’t exactly make the watch that well suited for smaller wrists, such as a woman’s. My wrist, admittedly, is pretty thin and it kind of looks ridiculous. But I haven’t gotten any insults or questions as to why I’m wearing such a giant watch, so I’ve just kind of lived with its large size. But if you’re used to wearing slim watches that easily fit underneath a shirt sleeve or jacket, you may wanna steer clear of the Watch Sport. 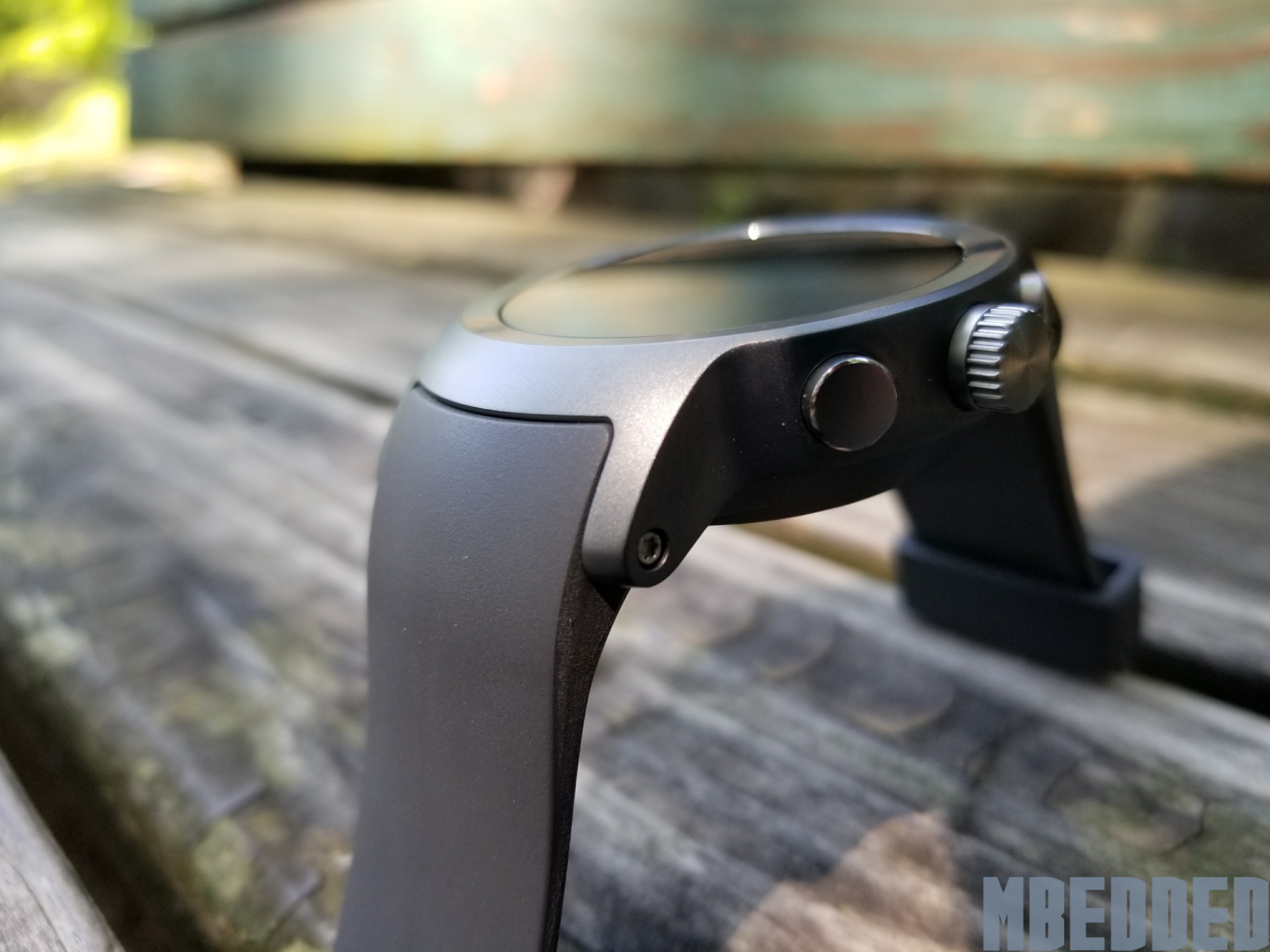 Speaking of the Watch Sport’s body, on the right-hand side sit two customizable buttons and a digital crown. Yes, the crown works just like it does on the Apple Watch by allowing users to scroll through menus and lists while the added buttons let you instantly access particular areas of your watch with one tap, so there’s not much exciting in this department. But regardless, the added hardware is much appreciated since smartwatches are supposed to make your life easier, something these three keys do.

Many people that have checked out this watch have said how they wish they could change the band. There’s no way whatsoever you could do this on the Watch Sport since things like LTE bands sit inside the straps, but to be honest, I don’t exactly miss the level of customization that’s possible with interchangeable bands. The built-in silicon band has done plenty of justice for me and remains sweatproof, waterproof, and dirt/dust proof to an extent. These are all elements I interact with on a daily basis, so this band, while it’s pretty plain, boring, and fat, has served its purpose. Regardless, you’ll definitely wanna check the band out for yourself before picking the Watch Sport up if you’re not a fan of it just from the images above. 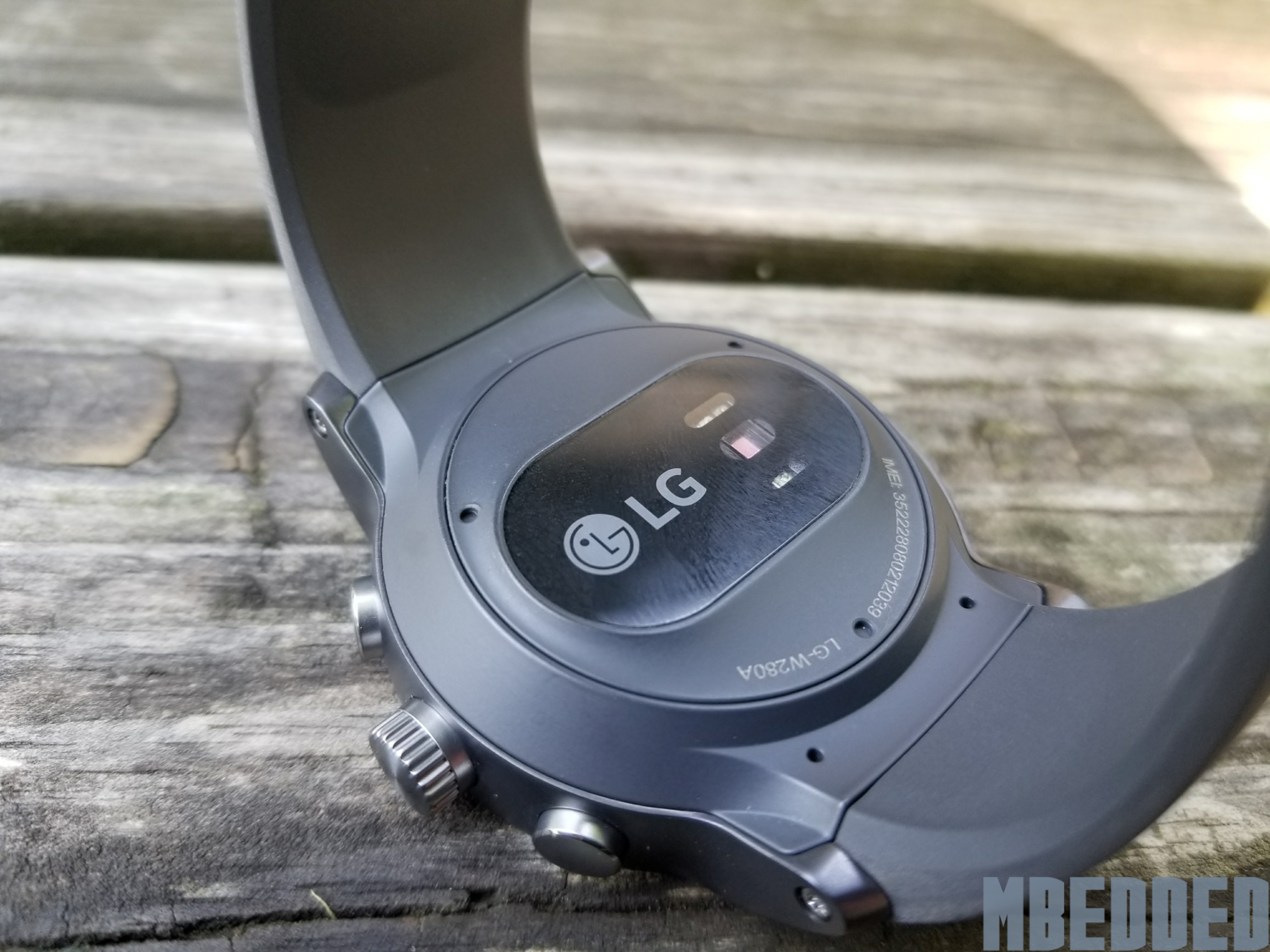 While the build is nothing to write home about, the Watch Sport’s specs are. It’s 1.38-inch 480×480 P-OLED display is bright and colorful, the Snapdragon Wear 2100 processor is speedy thanks to software optimization and the 768MB of RAM onboard, 4GB of internal memory is just enough to save a workout playlist for streaming at the gym, the heart rate sensor is perfect for exercising, the GPS is stupid useful to have on your wrist when you need to figure out how to get home, LTE connectivity allows for users to place phone calls and receive notifications all while their phone is at home, NFC is convenient for making Android Pay payments – basically any function you might want on a smartphone, the Watch Sport has it.

But this only half of what makes the LG Watch Sport the LG Watch Sport. Google debuted the Sport and Style watches when they launched Android Wear 2.0, the biggest update to hit Android Wear since it’s debut back in 2014. It’s a complete redesign of the company’s smartwatch platform and is built and optimized to compete with the likes of leading competitors like Apple’s watchOS and even Samsung’s Tizen OS.

For one, Android Wear 2.0 feels much more refined over its previous version. It’s easy to change watch faces (this requires just a swipe to the left or right while on your current watch face), access apps (a tap on the digital crown is all you need), view notifications (just swipe up from your watch face), and even get right to quick settings (a pull down gesture much like standard Android). Heck, Google even built in a dedicated Play Store with every Android Wear app available for download, making using the Watch Sport without a phone or with an iPhone a lot easier and less task-heavy.

I will say, however, the software isn’t perfect. There’s no Android Wear 2.0.1 or anything – just 2.0, in fact – so any bugs initially present when the software launched are still here. And yes, there are plenty of them. Sometimes apps crash, sudden stutters throw me off of what I’m doing, and hiccups when I get too many notifications are my crosses to carry. You also can’t scroll through every menu with the digital crown which I find both odd and unclear as to who I should blame: app developers or Google itself. Nevertheless, I really wish Google would iron most of these problems out in a near-future software update, but I’m really gonna have to cross my fingers because Android Wear isn’t exactly the platform Google has most of their focus on. 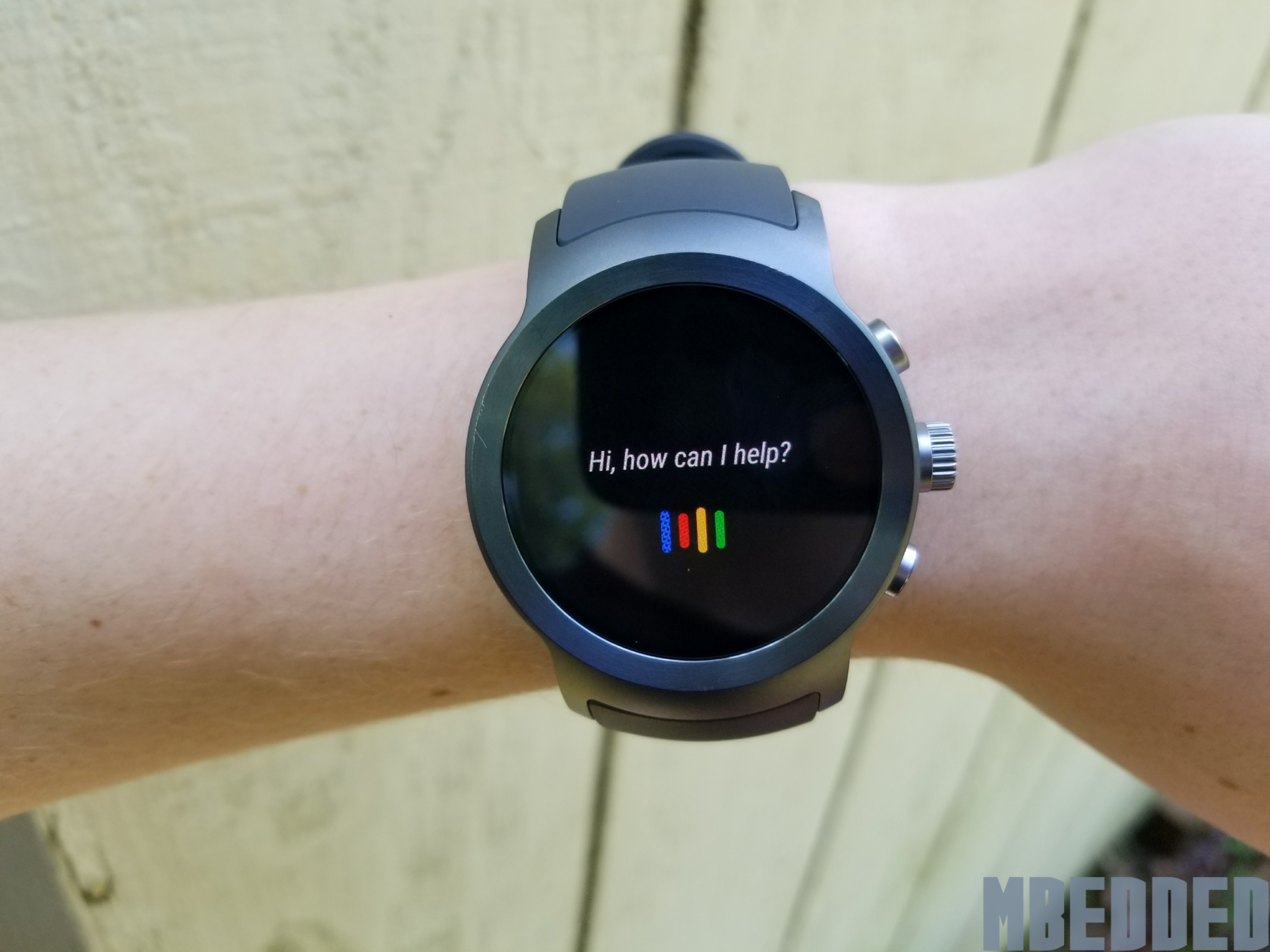 On the contrary, Google’s biggest focus of Android Wear 2.0 is the arrival of the Google Assistant. Via a long-press of the digital crown, you’ll be able to talk to your wrist and ask it questions like “What’s the weather?” or “How tall is the Empire State building?”. Of course, reminders and playing music is also possible in this department, but not everything. For one, Actions will take a while before they can reach your wrist, while most of Google’s announcements regarding the Assistant at I/O 2017 likely won’t even reach Android Wear. On the watch, you have a very basic list of functions like general Google searches, tracking your fitness, asking directions, playing music, responding to messages, and sending emails. This may sound like a lot, but when considering what the Assistant is actually capable of on other products, the Android Wear version looks nearly obsolete.

That’s not to say it isn’t useful. I find myself yelling “Okay, Google” at my wrist on the daily, while accessing weather information or tracking my walk with my voice is just more convenient. Yes, the Assistant on Android Wear needs better optimization since it’s not exactly the snappiest performer, but I expect it to receive an update sometime in the near future that’ll make it as – or, if not, nearly as – speedy as the Assistant on the phone and Google Home. And once this takes place, I think I may use the voice bot more than I do now.

Also markee features of Android Wear 2.0 are added LTE, GPS, and NFC support. Each of these functions is present in the Watch Sport which allow, respectively, for phone calls via your wrist, Google Maps via your wrist, and Android Pay via your wrist. This is all excellent functionality to have in such a convenient spot as your wrist, so I’m glad it’s all here.

While we’re on the subject of LTE, I placed a few phone calls with the Watch Sport using AT&T’s network. Calls seemed pretty clear using the loud speaker, and while slight stutters occurred partially during a conversation with someone, they didn’t ruin my experience talking into my wrist like Dick Tracy. I was also able to ditch my phone for a couple of hours while I took a walk on the Ocean City boardwalk while still receiving all of my notifications, phone calls, and text messages. Connectivity on AT&T’s network was well received in the South Jersey locations I tested in, so I had a pretty fair experience all around using the LTE function of the Watch Sport. 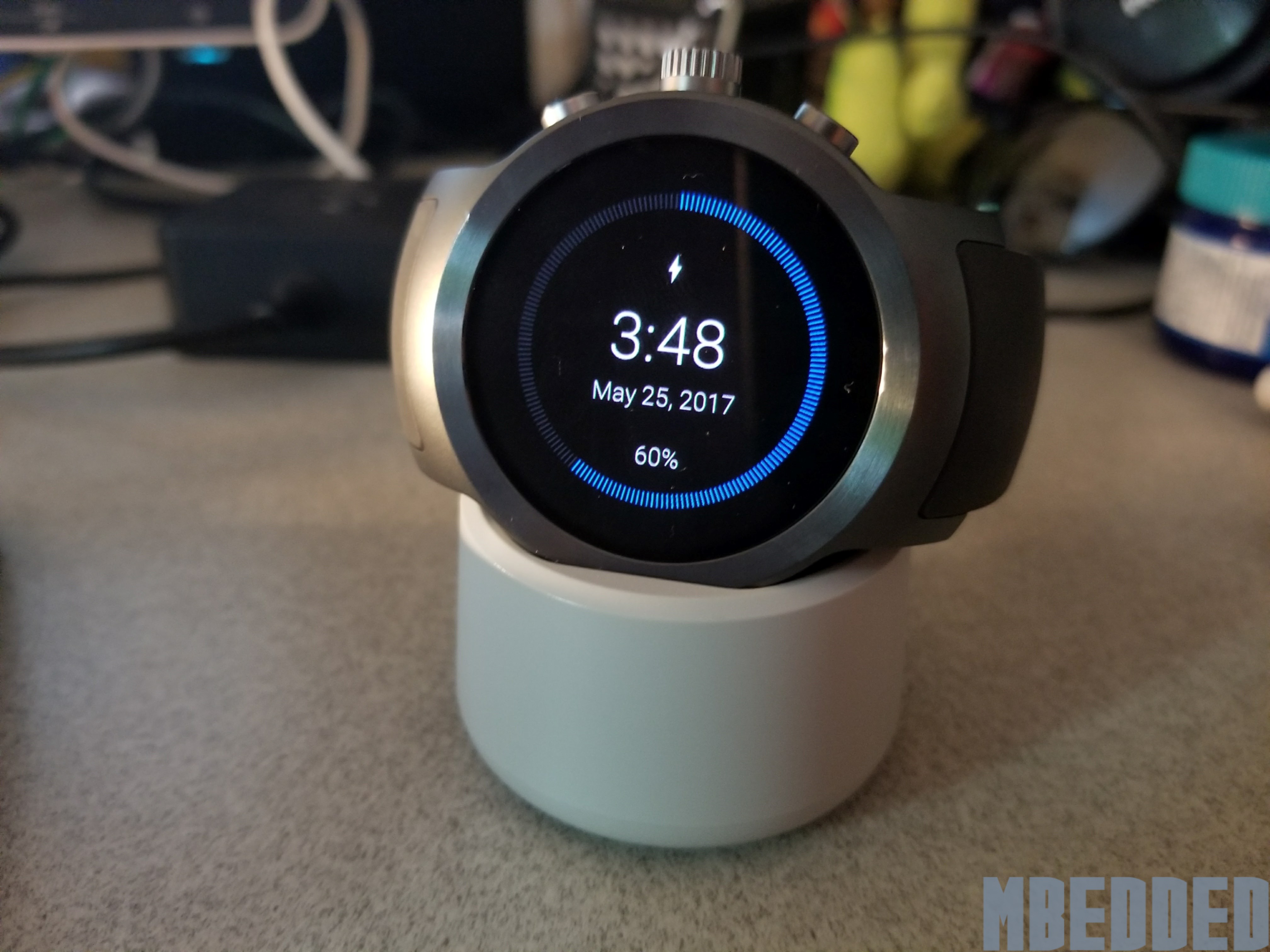 Notably, this alone reminds me that I can get through a full day of use out of the Watch Sport by using just Wi-Fi and Bluetooth, no more and no less. If I use LTE at all, I usually fumble around looking for my charger by dinner time. Speaking of which, the Watch Sport charges over a wireless dock much like a standard Android phone would charge over a wireless charging pad. It’s also pretty quick, with the device going from 0-100% in about 2 hours, give or take. I don’t really mind this speed since I only charge it at night, so I’ve been satisfied with the battery performance of the Watch Sport. You know, as long as I don’t use LTE.

Considering this is a watch with the word “sport” in the title, it’s only appropriate to mention fitness. The Watch Sport is great in this category as I can track a variety of workouts with Google Fit while also keeping tab on my calories, steps taken, and even my heart rate throughout various sessions using the built-in heart rate sensor which, roughly 85% of the time, I’d say is accurate. You can even take a dunk in the pool since this watch is IP68 water resistant, but I wouldn’t go for a full swim. Yes, the device is bulky and sometimes gets in the way unlike something more discrete such as a Fitbit, but it gets the job done as long as you’re a bit more careful than usual during your workouts.

The only workout I wouldn’t recommend doing with this watch, unfortunately, is push-ups. Unless you position the Watch Sport in a certain manner on your wrist, you’ll be accidentally activating the Google Assistant constantly with the back of your hand. I even notice this while performing simple gestures such as pushing something with my hands or, sometimes, just closing a door. Therefore, I’ve tended to just slide the device up my arm a bit more than I would normally with a standard watch in order to prevent these slight mishaps. 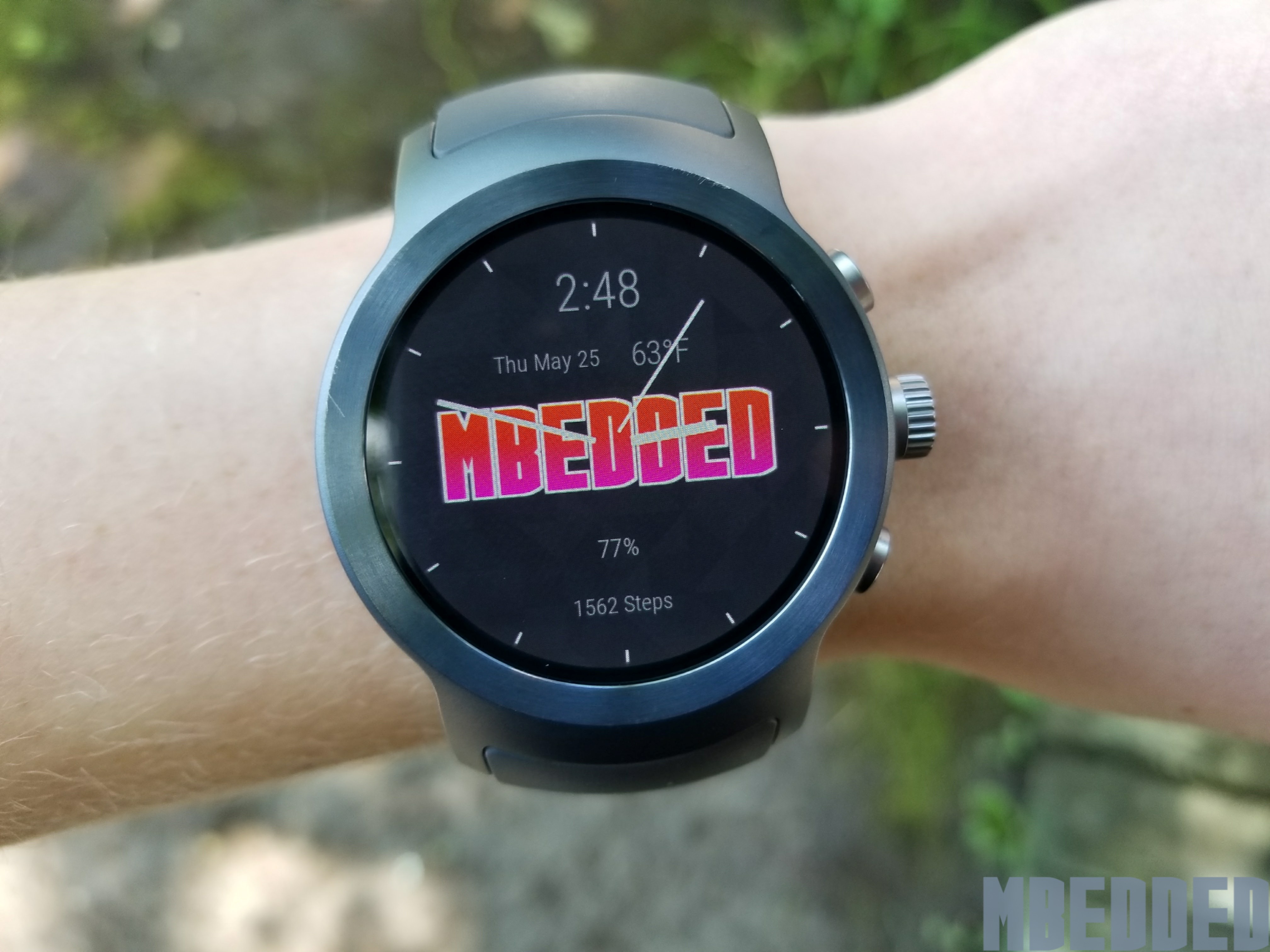 The LG Watch Sport, in a few short words, is just a showcase for Android Wear 2.0. It’s as if Google said, “Hey, we’ve gotta show off every capability we built into Android Wear 2.0 so let’s build a smartwatch with everything in it,” while the design guy in the back was like, “Yeah, well, if we do this, the watch is gonna be super thick and chunky.” Then Google fired that design guy and stole his blue prints.

In all seriousness, it’s clear Google just wanted to focus on showing off its new software rather building great hardware to compliment things. Just by looking at the Watch Sport, you may not buy it. But if you get to play with the software, there’s a good chance you’ll change your mind. Do I want the Watch Sport to be thinner? Absolutely. Do I wanna change its band? Yeah, why not? But am I gonna wear it every day? Yes, and only because of Android Wear 2.0, LTE, GPS, and NFC.

That’s not to say you should buy it, however. The Watch Sport costs $349 and is limited in nearly every outlet that’s selling the device, whether that be Google or AT&T. (Verizon even gave the watch the ax recently, so don’t try this place if you want a Watch Sport). Plus, if your wrist is thinner than the average joe’s, you might hate the size of this thing. But if you’re a die heart Android Wear user or wanna witness the future of Google’s smartwatch ambitions and be first in line to receive any major changes, the Watch Sport is probably for you.

For everyone else, you may wanna pass on this one.

If you want the official MBEDDED Android Wear 2.0 face on your wrist, head over to this link. You’re welcome in advance.