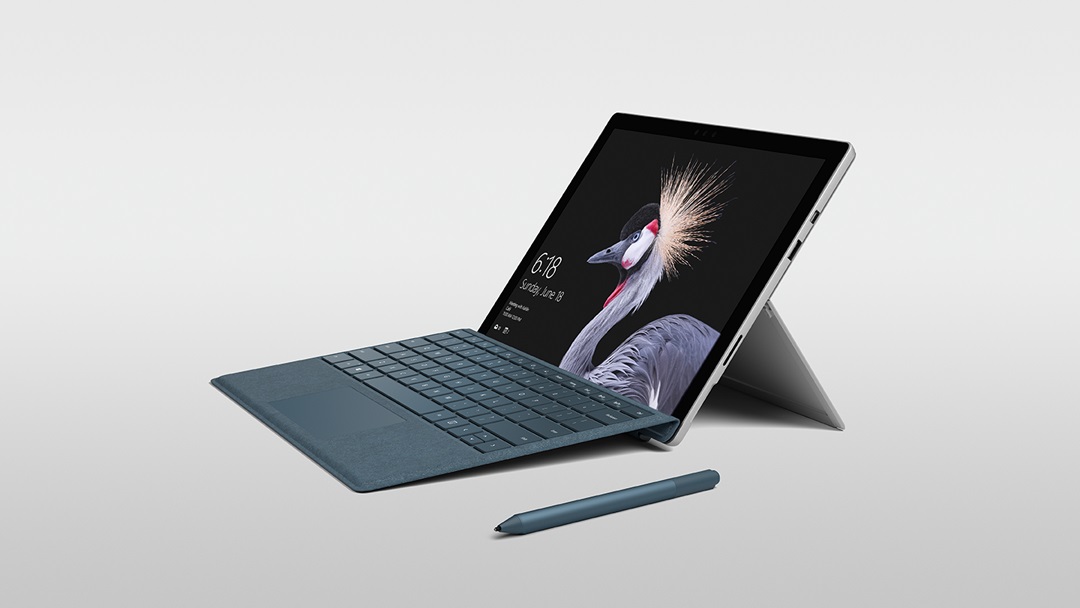 After a pretty major leak last week, Microsoft today unveiled the all-new Surface Pro. No, not Surface Pro 5 or anything. Just Surface Pro. And surprise, there’s no USB-C.

Why you may ask? Because Microsoft doesn’t think it’s ready for its customers. Yes, it’s true USB-C is still in its early stages of existence and likely a majority of consumers haven’t been able to adopt the technology in their own household, but it still would’ve been nice to see Microsoft include at least one USB-C port on their new Surface Pro just to signal they’re future proofing this new 2-in-1. But hey, what are ya gonna do?

Moving on, the new Surface Pro looks nearly identical to the previous Surface Pro 4. But it doesn’t look like Microsoft wanted to redesign the tablet practically at all. Instead, the company has apparently built-in over 800 new custom parts in the Surface Pro, therefore using 99% of the available interior real estate. There’s also new 7th-generation Intel Core i processors, a bump in battery life to 13.5 hours (50% more than the Surface Pro 4), and an improved hinge that allows for the tablet to sit at a full 165-degree angle. Microsoft was also able to make the Surface Pro a bit slimmer at 8.5mm and lighter at 1.7 lbs. You also don’t get any fans with the Intel Core m3 and i5 models, while the i7 sports a fan that makes sound rated at just 18dB.

The same 12.3-inch PixelSense display from the Surface Pro 4 is available on the Surface Pro, but Microsoft has added a couple new tricks to it. For starters, native support for the Surface Dial is present. Sure, you’ll be able to do the same thing on Surface Pro 4s and Books in the future with a new firmware update, but that’s not coming until later this year. The company also upgraded the pressure sensitivity of the Surface Pen on the screen to 4096, therefore allowing greater precision and less lag between the Pen itself and what shows up on the display.

Microsoft also added LTE to a special variant of the Surface Pen that’ll go on sale later this year. It supports both micro SIM and eSIM technologies and will be priced slightly higher than the Wi-Fi only variant. We’ll let you know when it becomes available.

Unfortunately, when you buy the Surface Pro, you’ll have to pay for all the accessories. Before, you used to get both the tablet itself and the Surface Pen, but now the latter will cost you an extra $99. Luckily, it does come with a new tilt function allowing creators to draw at an angle, but I’m not sure if this will suffice an extra $100 on top of the price you already have to pay for the Surface itself.

The Surface Type cover still ships separately in black for $129, but you’ll also have the option of picking up an Alcantara-coated variant for $159 in platinum, burgundy, and cobalt blue. For reference, the Surface Pen is also available in the same finishes.

The Surface Pro, with no USB-C and the same Surface connector, USB-A port, and mini DisplayPort, is available for preorder starting at $799, while the Type Cover and Pen are also available for $129 or $159 and $99, respectively. All of these products will begin shipping on June 15th in 26 countries including Australia, Austria, Belgium, Canada, China, Denmark, Finland, France, Germany, Hong Kong, Ireland, Italy, Korea, Luxembourg, the Netherlands, New Zealand, Norway, Poland, Portugal, Span, Sweden, Switzerland, Taiwan, the UK, and the US.