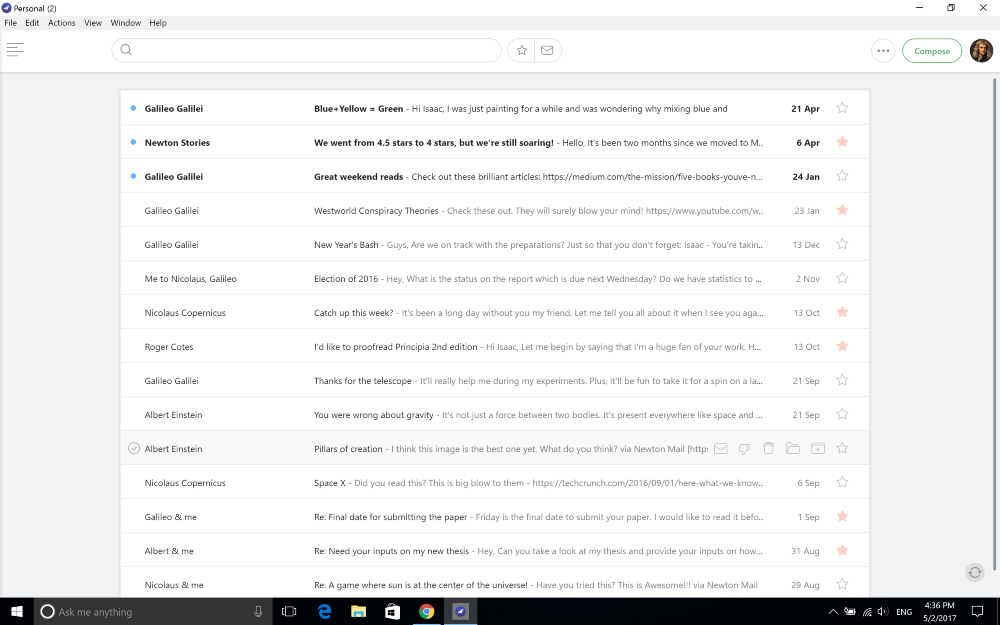 I’ll admit, I’m guilt of using the email app Newton (formally CloudMagic). It’s a premium email client for iOS, Android, and Mac that lets you access all of your email addresses by logging into one, single account stored on Newton’s servers. It’s just stupid convenient to punch in one email address and one password to instantly log into five inboxes. There’s also a whole suite of features like Read Receipts, Snooze, Send Later, Superchargers, and more.  Now, the service is getting even more convenient as it’s formally arriving as a Windows 10 app in a closed beta.

Via a blog post, Newton has announced the ability of the beta version of their official Windows client which is downloadable via the Windows Store, therefore allowing all Windows 10 users to run it on their PC. Currently, only Newton subscribers can test it, but if you’re not a member, why try testing it anyway?

As of now, a lot of Newton’s unique features are missing, including Read Receipts, Snooze, Send Later, Superchargers, and more. Luckily, push notifications and auto-inbox-refresh are here despite originally being absent. In addition, a super clean UI similar to that of the Mac app’s is also present to make managing your email easy.

You’ll have to be running at least the Windows 10 Anniversary Update in order to use the Newton email app, and if you are, you can download the beta here. Newton says more features will be added over time so stay tuned.