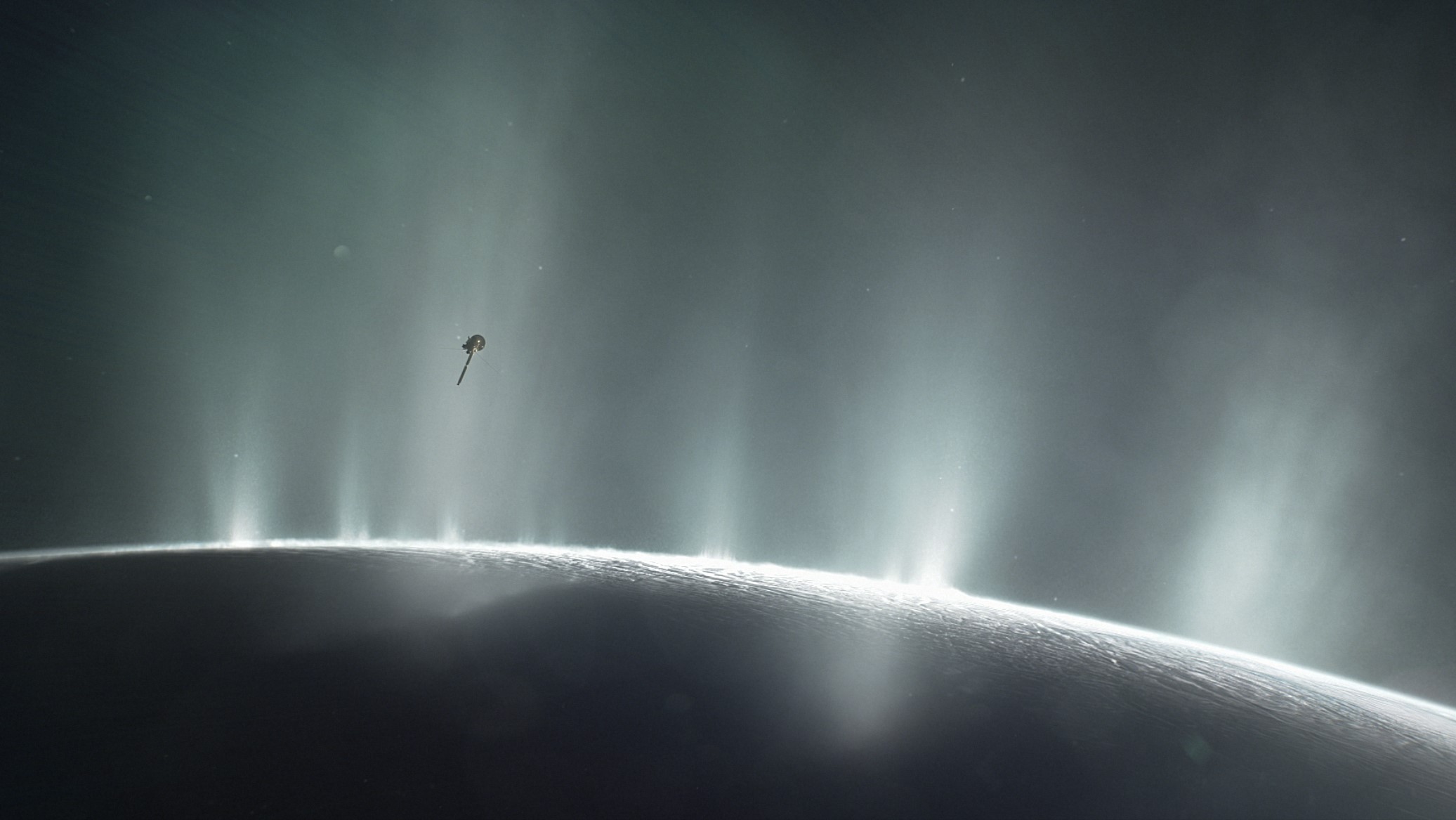 NASA scientists have found that Saturn’s icy moon Enceladus is worthy of supporting alien life thanks to a number of factors. It seems that Enceladus falls under the “ocean planet” category in which a flagship element of the moon happens to be its hidden ocean which is showing off-chart signs of hydrogen gasses and molecules being poured in and reaching the seafloor. This, therefore, indicates there may be hot spots found within the icy waters which suggest heated rocks are interacting with the cold elements. And according to NASA, these rocks could be perfect spots for life to thrive such as unknown bacteria.

Periodically, waters will erupt through Enceladus’ crust thanks to this added hydrogen. It’s these eruptions that indicate there’s likely hot spots found within the icy waters that are probably caused by heated rocks which interact with the colder elements in this fashion. And according to NASA, these rocks could be perfect spots for life to thrive such as unknown bacteria.

“This is the closest we’ve come, so far, to identifying a place with some of the ingredients needed for a habitable environment,” said Thomas Zurbuchen, associate administrator for NASA’s Science Mission Directorate at their headquarters in Washington. ”These results demonstrate the interconnected nature of NASA’s science missions that are getting us closer to answering whether we are indeed alone or not.”

The hydrogen was discovered during the Cassini spacecraft’s last dive through the plume of spraying gas and icy material on Enceladus October 28, 2015. The craft also collected samples during an earlier flyby. Scientists discovered via these samples that the plume consisted of 98% water, roughly 1% of hydrogen, and a mixture of other molecules like carbon dioxide, methane, and ammonia. The sample was made using Cassini’s Ion and Neutral Mass Spectrometer (INMS) which sniffs gasses to determine their composition. The final results were published in the journal Science.

So why are we assuming just because there’s hydrogen there’s life on Enceladus? We’re not assuming. Well, kinda…

See, NASA says since there’s ample hydrogen in Enceladus’ ocean, there may also be microbes. These microbes would use the hydrogen to obtain energy by combining the hydrogen with carbon dioxide in the water. This process is called methanogenesis because it produces methane as an output, and it’s what’s responsible for life here on Earth. So they figure if methanogenesis helped Earth’s humans develop, why can’t it help Enceladus’ aliens?

Not only this, there’s also evidence of carbon, hydrogen, nitrogen, and oxygen within Enceladus’ ocean, critical ingredients required to be present in order to support life as we know it. And while NASA says there’s nothing to suggest phosphorus and sulfur – two other critical ingredients in the process of supporting life – are present on Enceladus, scientists suspect they indeed are since the rocky core of the moon is “thought to be chemically similar to meteorites that contain the two elements.”

That’s nice and all, but there’s still no evidence Enceladus is actually inhabited. Instead, the moon is being thought of habitable. Until further evidence suggests there’s actually life present, we won’t know for sure if there are aliens on one of Saturn’s moons. “Although we can’t detect life, we’ve found that there’s a food source there for it. It would be like a candy store for microbes,” said Hunter Waite, lead author of the Cassini study.

That quote basically sums this entire article up: there’s proof that life may exist, but there’s no proof it actually does. Regardless, these are some of the biggest discoveries ever made in the history of space travel and has pushed us one step closer to the ultimate discovery of life beyond Earth.

Update: NASA’s Hubble telescope was also able to find evidence of an erupting plume back in 2016 during its orbit, further confirming the findings of Cassini’s mission as legit. The plume’s reach was apparently 62 miles (100 kilometers) above Europa’s surface. Ultraviolet photographs were taken which are viewable below. A similar plume was spotted back in 2014 which reached 30 miles above the moon’s surface. It’s also likely this event is taking place in one, consistent spot.

“The plumes on Enceladus are associated with hotter regions, so after Hubble imaged this new plume-like feature on Europa, we looked at that location on the Galileo thermal map. We discovered that Europa’s plume candidate is sitting right on the thermal anomaly,” said William Sparks of the Space Telescope Science Institute in Baltimore, Maryland.

NASA details how these plumes could affect Enceladus’ surface below.

The researchers say if the plumes and the warm spot are linked, it could mean water being vented from beneath the moon’s icy crust is warming the surrounding surface. Another idea is that water ejected by the plume falls onto the surface as a fine mist, changing the structure of the surface grains and allowing them to retain heat longer than the surrounding landscape.

Regardless, this is just more evidence to add onto today’s case that life beyond Earth is more likely than you think.