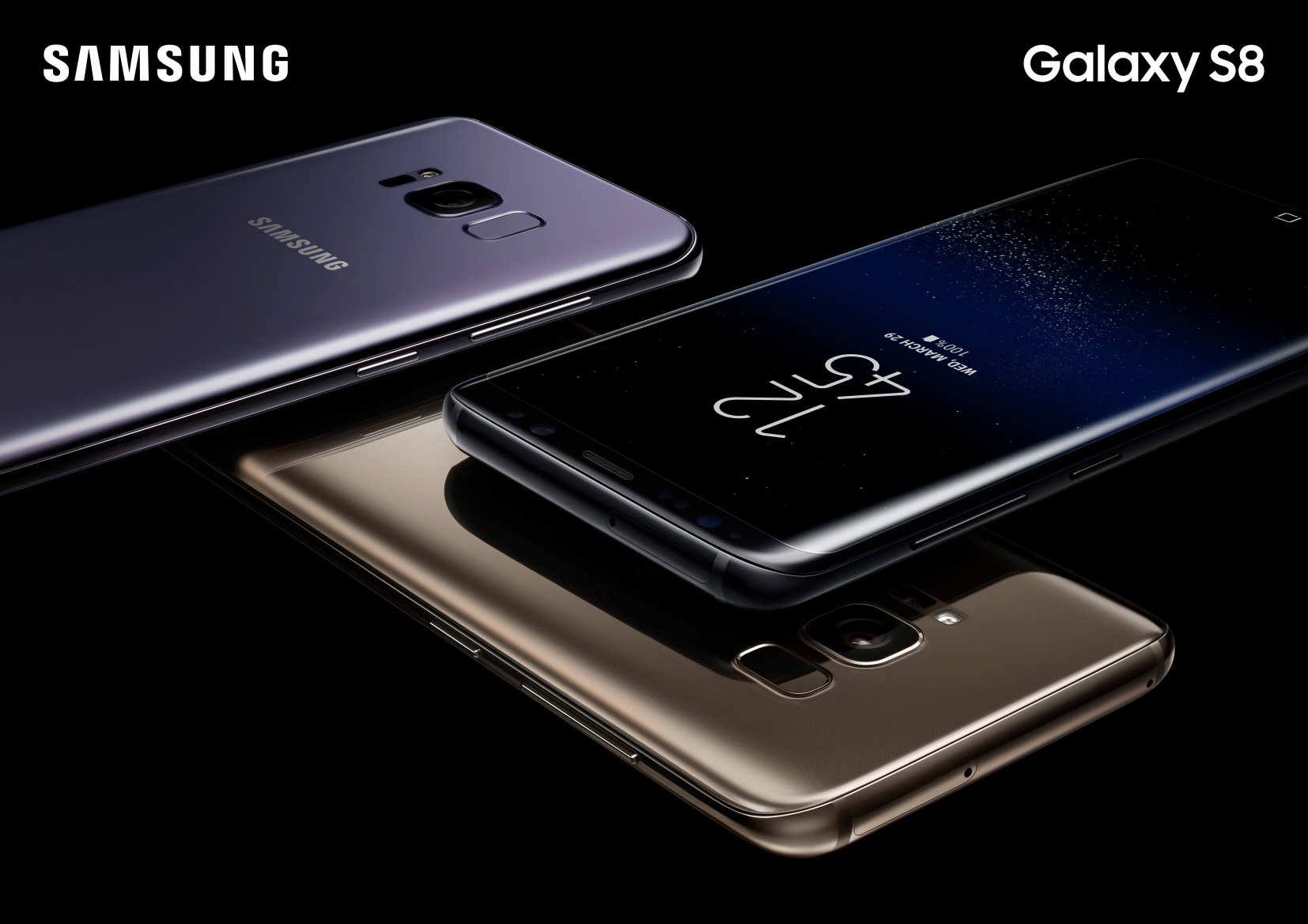 During their Unpacked 2017 event today, Samsung officially unveiled their latest flagship smartphones known respectively as the Galaxy S8 and S8+. These handsets will be Samsung’s saving grace as their last flagship didn’t exactly last very long while the company’s image was horribly damaged. Hopefully, consumers will get over these factors as this fresh duo of devices is pretty sweet.

“The Samsung Galaxy S8 ushers in a new era of smartphone design and fantastic new services, opening up new ways to experience the world,” said DJ Koh, President of Mobile Communications Business, Samsung Electronics. “The Galaxy S8 is our testament to regaining your trust by redefining what’s possible in safety and marks a new milestone in Samsung’s smartphone legacy.”

Starting with the design, the Galaxy S8 features a body similar to what would be the result if a Galaxy S7 had a baby with an LG G6. There’s very minimal bezels on the front surrounding the display (more on that in a bit) allowing for a bigger screen and a smaller body, while the device is also pretty skinny and should fit more snug in consumers’ hands. It also features Corning Gorilla Glass 5 on the front and back, while an aluminum frame surrounds the entire border of the device.

A factor that’s staggeringly different when compared to last year’s Galaxy S7 is the lack of physical navigation keys. Instead, Samsung has opted for an array of software navigation keys which they gave a redesign to over stock Android’s normal appearance. These hide from within certain apps, with a firm press on the bottom of the display springing them back to life. 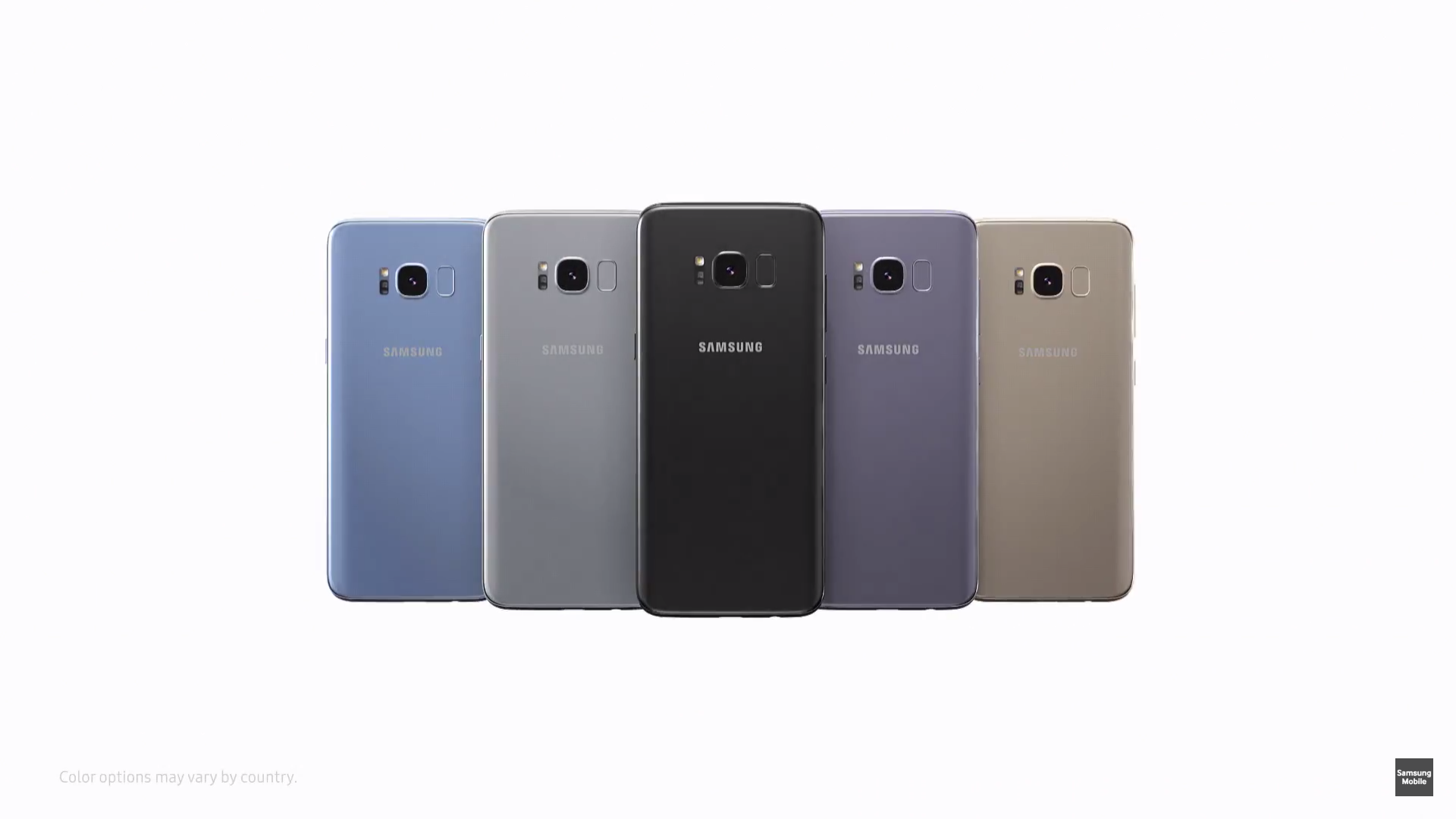 The fingerprint sensor, rather being on the front like previous generations, has been shifted to the back of the phone next to the camera module. This will make for a pretty fair stretch of your index finger to unlock your phone, so it’ll be interesting to hear opinions regarding the change.

As previously stated, there’s two versions of the Galaxy S8: one is simply known as the Galaxy S8, while the other features upgraded specs and is called the Galaxy S8+. The former features a 5.8-inch Super AMOLED 2960×1440 (570 ppi) Infinity Display while the latter has a pretty massive 6.2-inch Super AMOLED 2960×1440 (529 ppi) Infinity Display (“Infinity” basically references the displays’ lack of surrounding bezels, in case you were wondering). These screens will result in the phones being a bit taller than normal, so be sure to take note.

They also include a Mobile HDR Premium certification, meaning the displays on the S8 and S8+ come with HDR support built-in.

Each phone will also include Samsung’s Edge design from years past, therefore allowing for quicker access to such things as app shortcuts and frequent contacts.

Samsung recently announced that Bixby would make its way into the new Galaxies, and now we get a chance to learn exactly what it can do. In case you’re not already aware, Bixby is Samsung’s AI-driven solution to Apple’s Siri and Google’s Assistant. It can help with normal voice assistant stuff like check the weather, but Samsung says it’s much more complex than that. It actually integrates with apps to allow for a more immersive experience with whatever service you may be trying to utilize.

A number of the Galaxy S8’s built-in apps such as the calendar already have Bixby integration, while developers will be able to take advantage of the technology using an SDK.

To activate Bixby, you have the option of either pressing a dedicated key alongside the Galaxy S8 or by saying, “Bixby.” The interface will then show up in which you can access curated information (called Hello Bixby) Bixby thinks you may wanna see, use Bixby Vision to identify objects with your camera (similarly to what Amazon did to the 2014 Fire phone) or translate text directly on your screen, ask questions, set reminders, navigate your phone with your voice, and more.

Bixby also ties in with other Samsung products. For instance, while in the S8’s gallery, you can send a photo to your TV for viewing on a larger screen. There’s also a load of functionality that isn’t mentioned here. Basically, Samsung’s goal is to create a voice command for every touch command you can imagine. I’m not sure if whether this will attract users or not, but it’s interesting to see anyway.

Also making the Galaxy S8 pretty unique is something called DeX. It’s basically Samsung’s version of Microsoft’s Continuum by allowing users to plug their phones into a special sold-separately dock which is then connected to a monitor. It offers a more PC-like multitasking-driven interface called the Samsung Desktop Experience which could prove better for doing work off of your phone. You’ll be able to connect an external mouse and keyboard to this dock, while an Ethernet jack is present for a wired internet connection alongside a cooling system consisted of fans to keep your phone from getting too hot. And in case you’re wondering, you’ll be using Android apps rather desktop-oriented software. 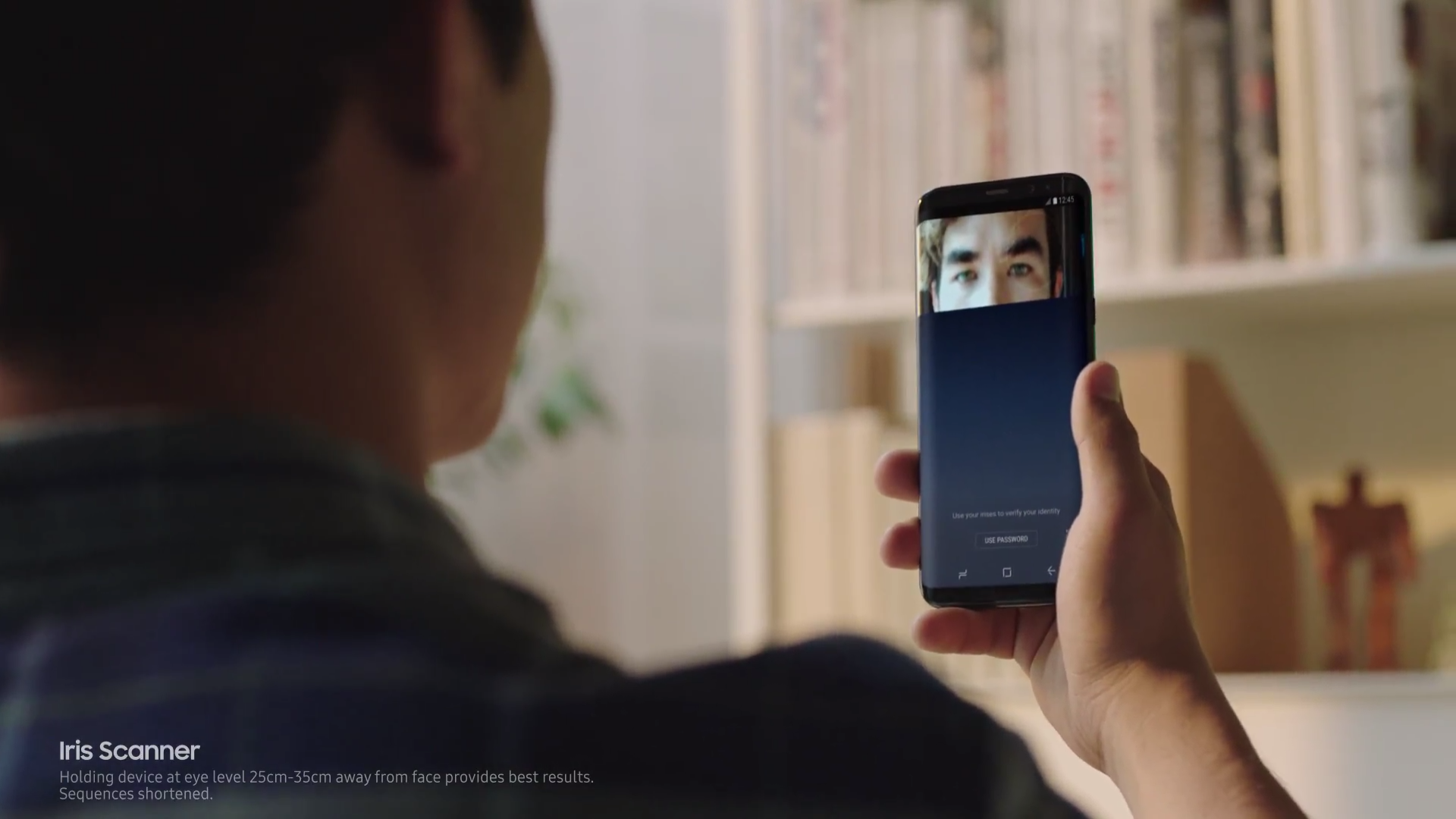 For extra security, Samsung is bringing a feature from the Galaxy Note 7 to the new S8 and S8+: iris recognition. It uses a dedicated infrared sensor to allow users to unlock their phone with just their eyeballs. The hardware can also be used for full-on facial recognition.

Surely, by now, you’re probably wondering what the specs of these handsets are. Without further ado, here’s a rundown:

On the back of the Galaxy S8 and S8+ is the same 12MP dual-pixel autofocus sensor found on the Galaxy S7 and S7 Edge with OIS, laser autofocus, a large f/1.7 aperture, and 4K video recording. Luckily, Samsung does include better image processing for more colorful and sharper shots, but between this camera and the one on last year’s Galaxy S smartphones, there’s not much new.

On the front, however, Samsung has included an all-new 8MP sensor with an f/1.7 aperture and Auto HDR on both the S8 and S8+ with autofocus for better selfies.

To protect your Galaxy S8, Samsung has introduced Samsung Premium Care as a warranty program which will replace Samsung Protection Plus. More info can be found below.

Premium Care provides one-on-one, 24/7 technical support and assistance for everything from the set-up of your device to device training to hand delivery of a replacement should something happen to your phone with our extended warranty. Samsung Premium Care is free for the first 30 days with your new Galaxy S8 and Galaxy S8+6. For more information, please visit: http://www.samsung.com/us/owners/protection-plus/.

Finally, Samsung is also introducing a new Gear VR headset to suit the Galaxy S8 and S8+’s new bodies. It has the same 101-degree field of view and Oculus controller as we saw in the recently released Gear VR headset, while compatibility with both microUSB and USB-C connections are possible. This means you can still use your Galaxy S7/Edge, Galaxy Note 5, or even an S6 with this headset. It’ll cost $129.99 when it launches April 21st. Samsung will also launch a new Gear 360 camera capable of capturing up to 4K 360-degree videos, 15MP photos, and 2K live streaming.

The Galaxy S8 and S8+ will launch April 21st in the US in these colors: Midnight Black, Orchid Gray and Arctic Silver. Blue and Gold will be offered internationally. AT&T, Cricket Wireless, Sprint, Straight Talk Wireless, T-Mobile, U.S. Cellular, and Verizon Wireless will all carry the phones in addition to BestBuy.com, the ShopSamsung app, Target, and Walmart, while pricing remains unknown. Preorders begin tomorrow, March 30th. Perks for those who order soon enough can be found below.

Consumers who pre-order a Galaxy S8 or Galaxy S8+ will receive a free Gear VR headset with Controller and Oculus content4. A limited edition premium bundle which adds a 256GB memory card and Bluetooth headphones by AKG will also be available for $99. Additionally, consumers who purchase Galaxy S8 or Galaxy S8+ will be eligible for Platinum Experience Status with Samsung Rewards5. These promotions will last for a limited time and only while supplies last. Terms and conditions apply. Visit samsung.com/us/promotions and samsung.com/platinumexperience for more information.