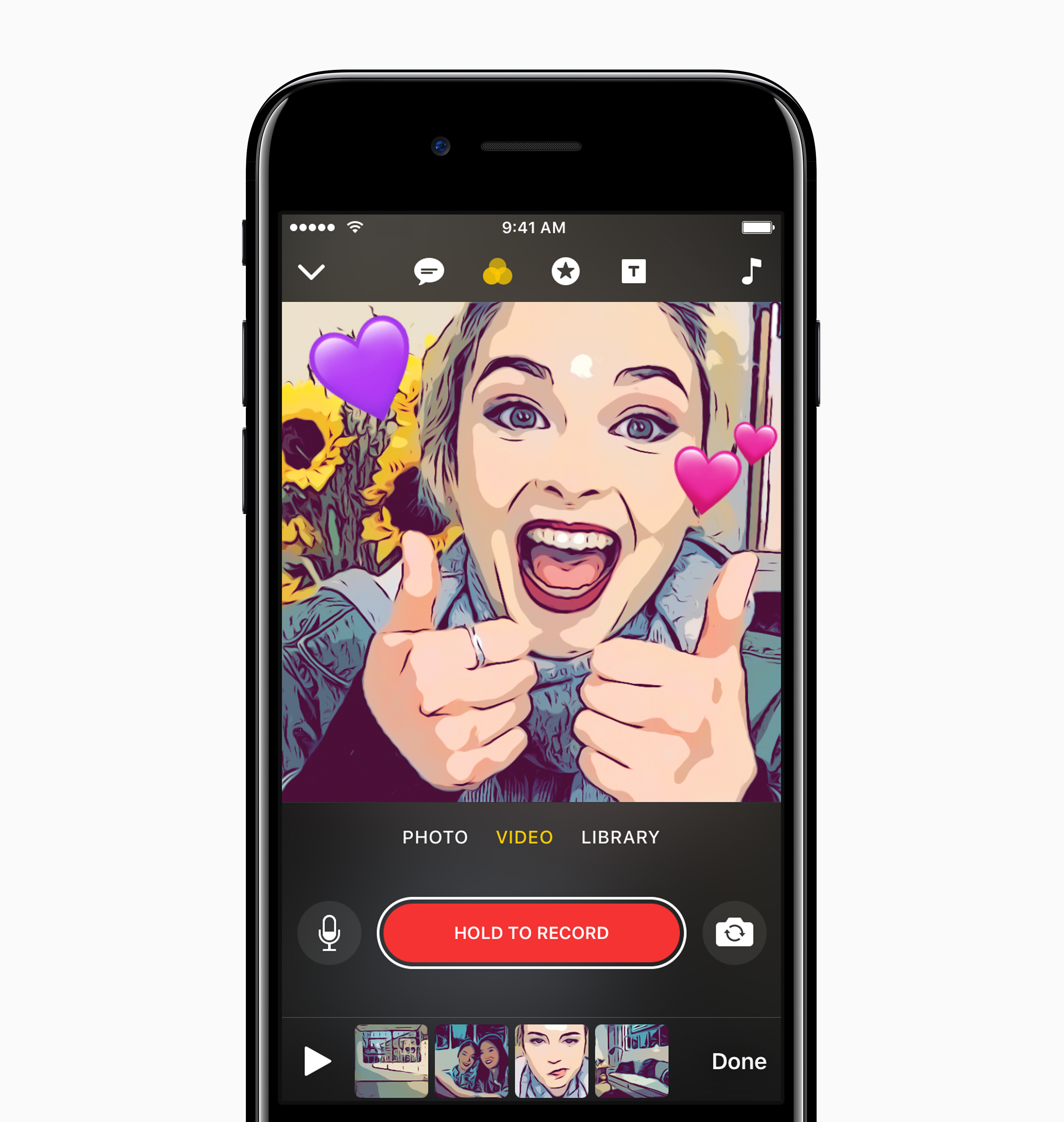 We heard last year that Apple was rumored to introduce a new app that would compete with the likes of Snapchat. While Apple’s official news doesn’t reflect these whispers to every extent, they do have an announcement to make that’s similar…

Today via a press release, Apple introduced a new app exclusively for iOS called Clips. This app allows you to create short clips consisting of photos and videos you choose to include. You can then add multiple different effects like comic book filters, speech bubbles, shapes and full-screen animated posters, text elements, and more and create a video that can be shared to sites such as YouTube, Facebook, Vimeo, and more.

Apple today introduced Clips, a new app that makes it quick and fun for anyone to create expressive videos on iPhone and iPad. The app features a unique design for combining video clips, photos and music into great-looking videos to share with friends through the Messages app, or on Instagram, Facebook and other popular social networks.

One unique aspect of Clips is something Apple calls Live Titles. This allows users to “create animated captions and titles using just their voice.” The company believes this will be one of Clips’ shining features and hopefully lure users in. Susan Prescott, Apple’s vice president of Apps Product Marketing, even quotes the feature in a statement which can be seen below.

Apple explains Clips a bit more in detail below.

Clips lets users create multi-clip videos on iPhone or iPad without timelines, tracks or complicated editing tools. Touch and hold a single button to shoot live video and photos, or add them from the Photo Library. Then add artistic filters, speech bubbles, shapes or emoji. Users can also add full-screen posters with animated backgrounds and customizable text. Clips has dozens of music soundtracks to choose from, and they automatically adjust to match the length of a video.

With Live Titles in Clips, users can add animated captions and titles using just their voice. Captions are generated automatically as a user speaks, and appear on screen perfectly synced with the user’s voice. Users can mix and match different styles, and tap any title to adjust text and punctuation, or even add inline emoji. Live Titles supports 36 different languages.

Videos made with Clips can be shared directly to popular social networks and video websites, including Instagram, Facebook, YouTube, Vimeo and more. When sharing with friends in Messages, Clips can suggest who to share with based on the people who appear in the video, and the people a user shares with most often. When a suggested name is selected, Clips inserts the video right into Messages so it’s ready to send with one tap.

With this app, Apple isn’t trying to directly compete with Snapchat or Instagram. Instead, it’s combining what a handful of apps do best and creating one app off of that simple idea. With the number of young folks and Snapchatters on iOS, I can’t help but assume this app will succeed. It may be worth checking out if you want more from your YouTube videos or Facebook uploads.
Apple says Clips will launch this April on iPhone and iPad. It’ll be free to download from the App Store. You’ll have to be running iOS 10.3 or later, so that must mean a software upgrade isn’t too far away at this point.
Related