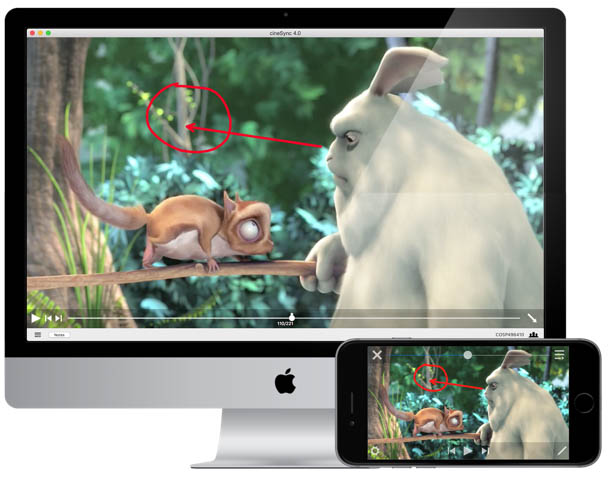 South Australian company Cospective developed cineSync for the film industry to edit and synchronise high-resolution footage in real-time in 2006.

Now the company has revamped the program to be compatible with iPhones and iPads so directors, producers and editors can collaborate on edits almost anywhere.

CineSync allows movies that are being filmed in remote locations to have all of their visual effects edited in Australia or Hollywood simultaneously, slashing the time taken for post-production.

It is also a highly secure system that eliminates the need for file sharing and video streaming across third-party platforms.

Cospective has recently rolled out its newest version cineSync 4.0 on iOS to allow for greater portability and added security.

“It means you no longer have people flying across the world to physically view elements that are going to be created – saving time and money but what it really saves is miscommunication,” he said.

“Now it happens during the entire production, from well before a shot is filmed right through to delivery.”

Originally known as Rising Sun Research, it was first used in 2006 on Harry Potter and the Goblet of Fire and Superman Returns.

Since then, cineSync has won an Academy Award for Technical Achievement and is now regularly used by the big studios.

It was recently used to produce Marvel’s Doctor Strange, which consisted of 1450 VFX shots carried out by more than 1000 artists, from a dozen facilities spread from North America to the UK to China and Australia.

This meant VFX artists needed to be in constant contact with the director to ensure it was designed and colour coded correctly without taking away from the story.

CineSync ensures all media files remain secure by storing footage on local drives instead of file sharing across countries.

This process not only saves time but also allows the film to be processed in frame-accurate high resolution that is not restricted by internet bandwidth.

McGregor said putting the program on the App Store would increase portability and allow directors to review footage in transit.

“In Hollywood you need things done fast and even though an iPhone screen is small, it means that important decisions can be made when they need to,” he said.

“Launching it on iPhones also helps it remain secure because, especially with the newer versions, even the FBI and NSA have trouble getting into them.

“In a lot of ways it’s more secure than a desktop or laptop computer.”

Rising Sun Pictures and Cospective have remained collaborative partners and continue to work closely together on a number of Hollywood feature films.

“We often work on visual effects shots where we are adding computer generated things and these things need to look real but to describe it to someone verbally on the phone is near impossible,” he said.

“We also have to deal with clients who are directors, producers and VFX supervisors so to have the picture in front of you no matter where you are in the world and point and circle things and edit it in real-time opened up a new way of collaborating.

“CineSync hasn’t just helped us, it revolutionised the whole visual effects industry and helped to globalise it.”

Cospective has a similar program for marketing agencies and post-production houses called Frankie, which was also made available for freelancers.

It has been used by numerous agencies and sports franchises, including the Edmonton Oilers NHL team, to produce TV commercials and online advertisements.

CineSync is now available for iPhone and iPad on the App Store.