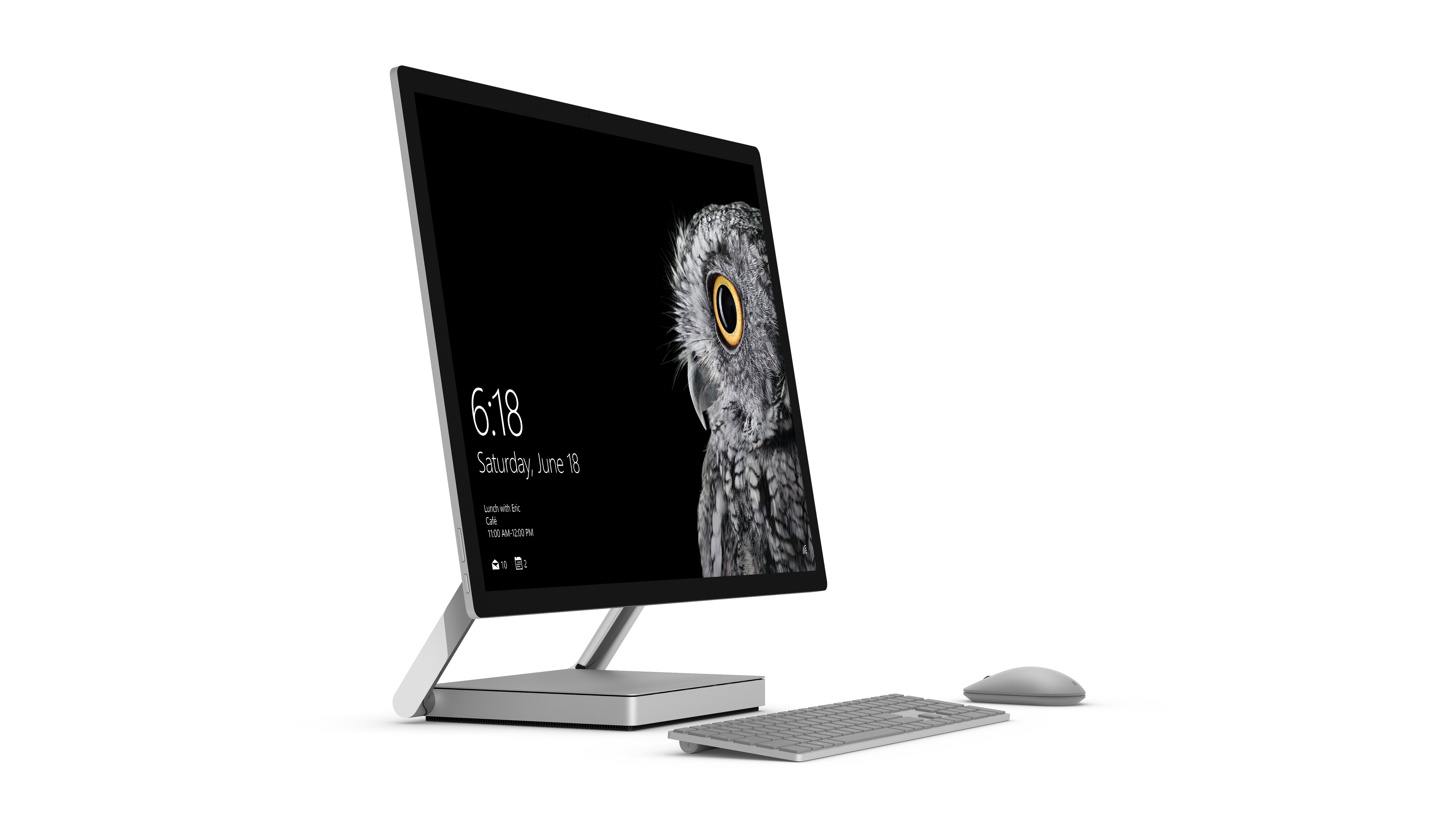 Following the introductions of the Windows 10 Creators Update and Surface Book with upgraded internals, Microsoft today unveiled what has been highly rumored for quite some time but never really expected to arrive: the Surface Studio. This all-in-one PC sports plenty of elements to make powering through your work day to designing those new graphics for your company to even making 3D models of stuff easy thanks to its large touch screen and accessory input. 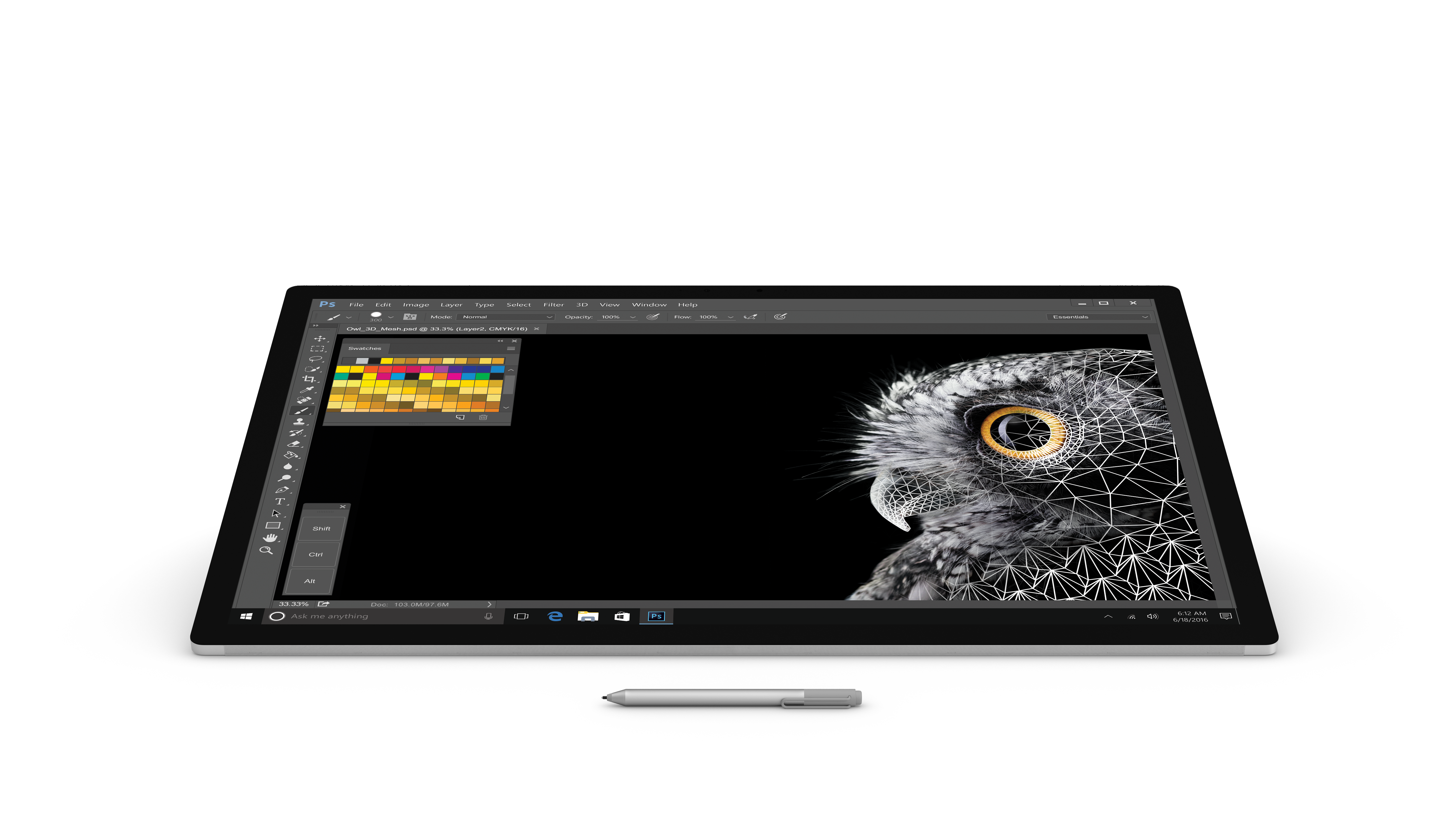 Starting with that display, Microsoft touts it as the “world’s thinnest LCD monitor ever built,” obviously taking jabs at Apple and their thin addiction. With just a 12.5mm profile, you’ll likely be surprised when you see this thing in person. In addition, the screen comes in at 28 inches diagonally, has a resolution of 4.5K (4500×3000), features 13.5 million pixels in total, sports an expanded color output which Microsoft calls “TrueColor,” and has a 3:2 aspect radio. 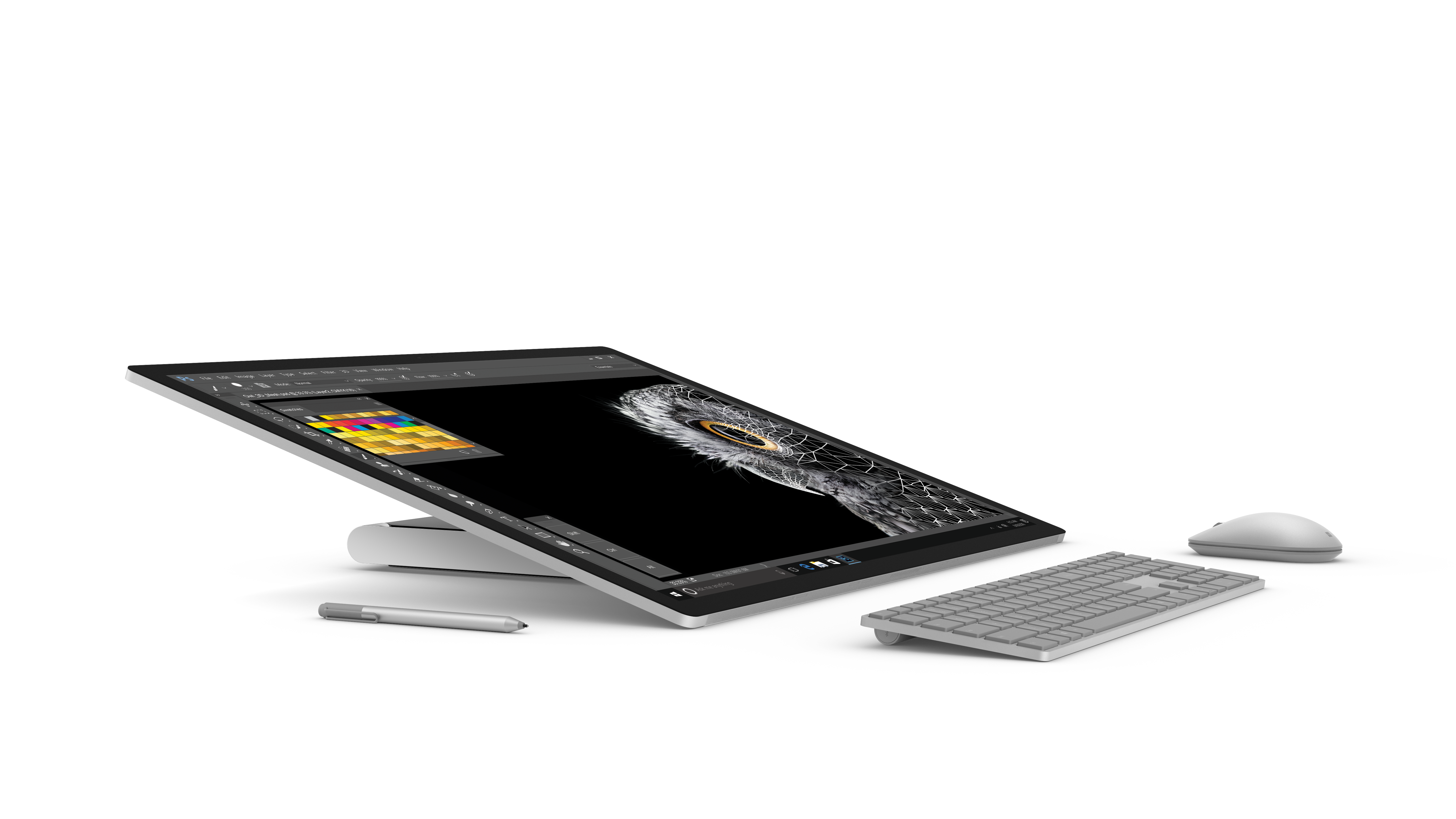 Regarding the internals, Microsoft has packed in Intel’s 6th generation Core i5 or i7 processor (your choice) alongside an NVIDIA GTX 965M GPU, while the upgraded model will include a 980M GPU (in other words, this GPU will come with the i7 model). Storage wise, you’ll be getting either 1TB or 2TB on a hybrid drive (hard drive/SSD), while in regards to the RAM, buyers can either get 8GB, 16GB, or 32GB. Four USB 3.0 ports are present on the Studio, while a headphone jack (yes!), an SD card slot, an Ethernet port, and mini DisplayPort are all present as well. Interestingly, Microsoft opted for a rear 1080 video camera on the Studio. I can’t see anyone using this, buy hey it’s there. In addition, a 5MP front camera is present for video calls and the occasional selfie, while Stereo 2.1 Dolby audio comes built in so your tunes and conference calls sound great on the machine. 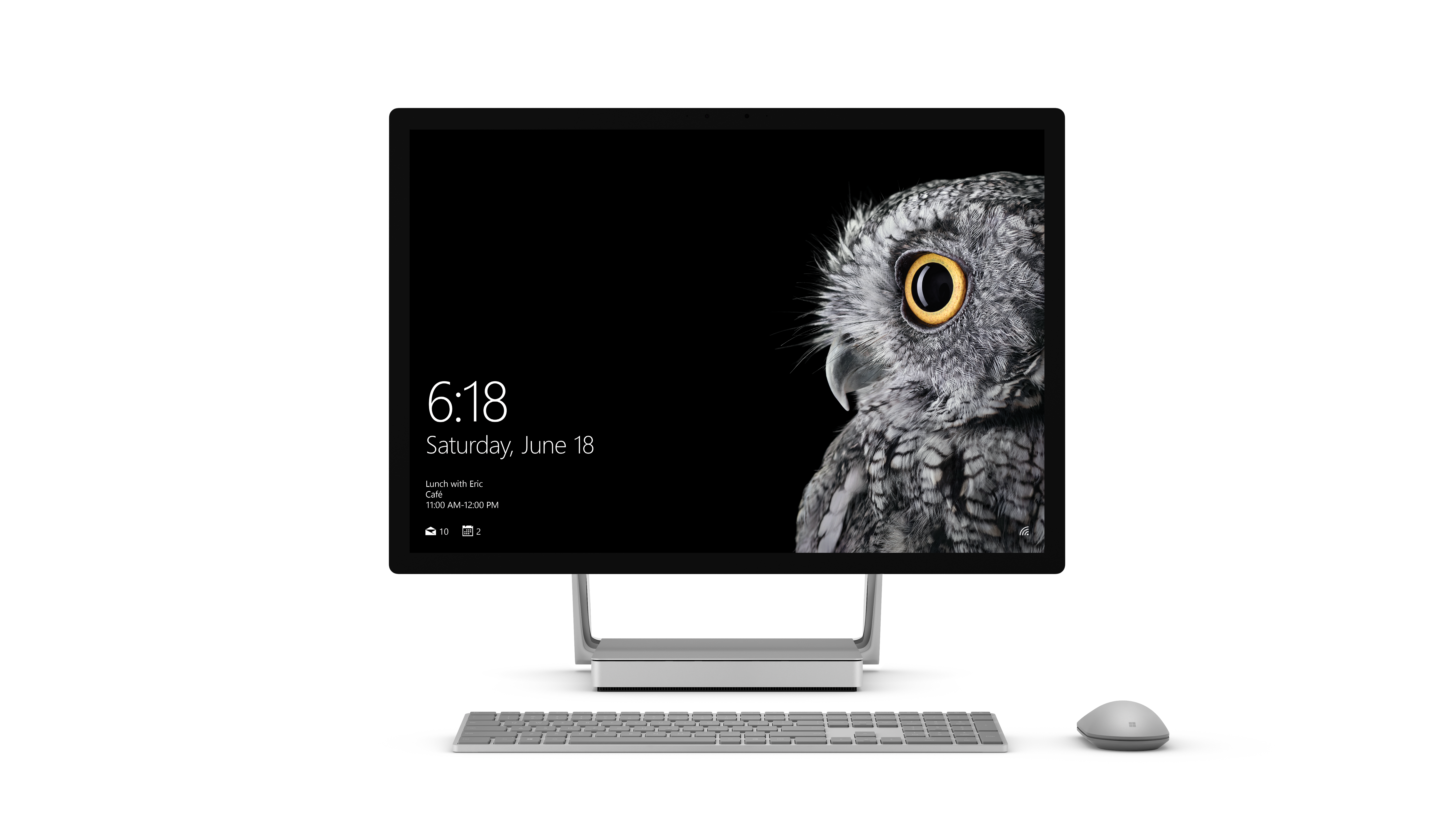 Enough with the specs, you’re probably wondering what makes this machine so special. For one, you can bend the display back to a 20 degree angle for a more comfortable stance while drawing. Second, the chrome arms holding up the screen on the Studio virtually disappear while using the machine (at least according to Panos Panay, lead member of Microsoft’s devices team). Third, there’s an array of mics on this guy to make interaction with Cortana from across the room possible. Finally (this one’s probably the most interesting), it works with the Surface Pen and Dial.

No reader, you didn’t read that wrong. At this very event while talking about the Studio, Microsoft debuted what they call the Surface Dial. This puck-shaped item can be recognized by the display on the Studio and bring up a contextual menu based on the app you’re in. For instance, if you’re in a Word document, you can use the Dial to scroll through just by twisting the device. Since this PC is targeted toward designers and artists, the company mainly used a painting application to demonstrate this feature. By placing the accessory on the display, a menu popped up with different colors to change the tone of the virtual paint brush or marker in real time. This by far is one of the shining features of working with the Surface Studio, but thankfully the Dial won’t be limited to this one machine as Microsoft has made it known the accessory will work with the Surface Pro 3, 4, and the Surface Book. Surely, the experience may not be as great as using the Dial on a big screen such as the Studio’s, but you’ll nevertheless get that added functionality you may desire after seeing this thing all over the place.

In addition, palm rejection is also present on the Studio so using the Surface Pen and Dial to draw and paint will be a more comfortable process. 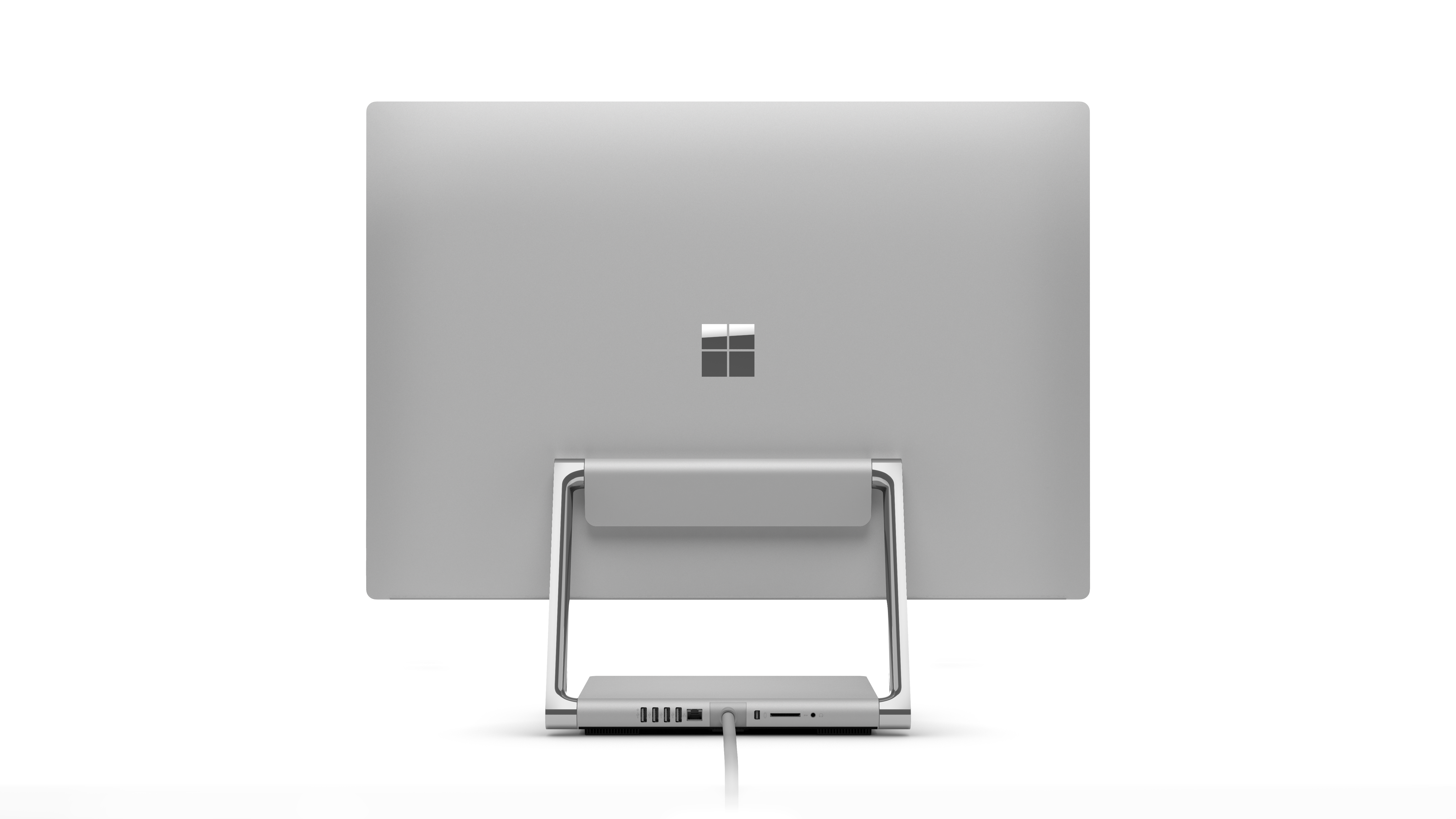 Since there’s so much focus on 3D in the Windows 10 Creators Update, it looks like Microsoft will be pushing the Studio as the perfect device to perform this function on. Of course, designers and artists will surely love the capabilities of the machine without the whole 3D element, but by bringing in these additional tools I’m sure plenty will not regret putting down the amount of money required to own one of these things. Because seriously, it’s a lot of money.

For starters, the baseline Surface Studio will run you $2999, and that’s with 1TB of storage, an Intel Core i5, 8GB of RAM, and the NVIDIA GTX 965M GPU. If you want the Intel i7 and 16GB of RAM, you’ll be paying $3499. In addition, for 16GB of RAM, an Intel i7 chip, and the 980M GPU from NVIDIA, Microsoft will take $4199 which is no small fee whatsoever. I’m really hoping that whoever buys this thing likes it, otherwise they may shell out almost $5000 for nothing.

If you’re looking to pick up the Surface Dial (to be honest, I almost typed Surface Puck instead before I caught myself), you’ll be paying $99. Luckily, this accessory comes free with every Surface Studio preorder which, by the way, is possible starting today. Click the links below to preorder your new office gear. Oh, and in case you were wondering, both products launch on November 10th.