As they were speaking about the new phones, Apple noted that both the iPhone 7 and 7 Plus would offer users battery battery life over their predecessors, the iPhone 6s and 6s Plus respectively. The iPhone 7 was promised at least 2 extra hours of use over the 6s, while the 7 Plus was promised an extra hour or so over the 6s Plus. For reference, here’s an exact rundown of the new battery life expectancies over previous models. 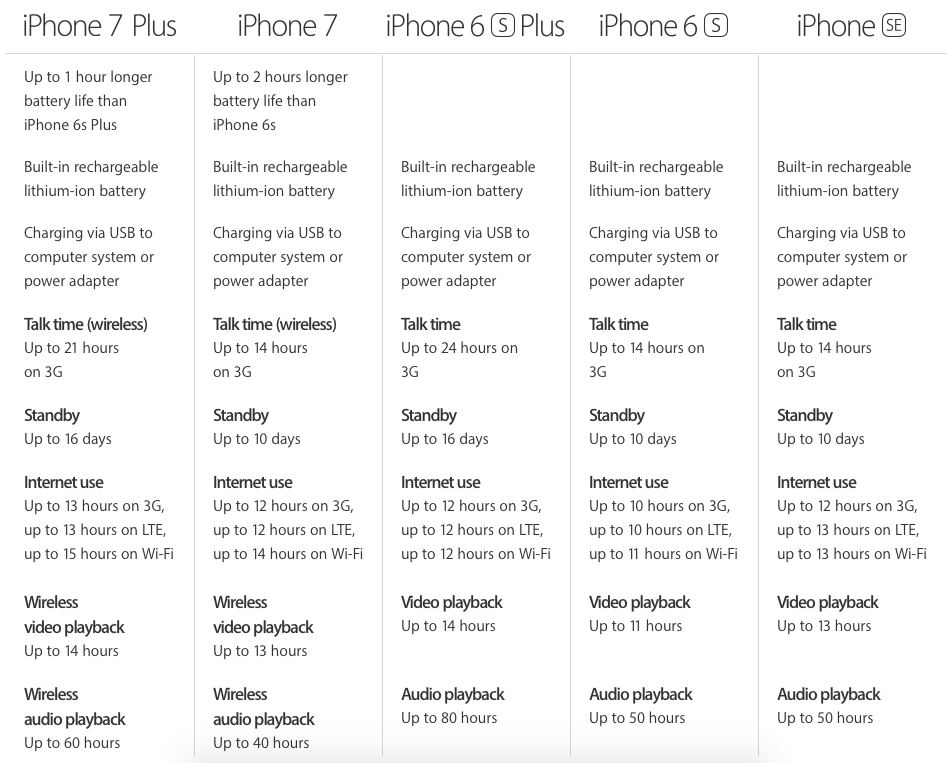 While we do have this information to base our assumptions off of regarding the battery life of Apple’s new iPhones, it still hasn’t been clear just how big these new cells were. However, according to some leaked documentation found by TENAA, we now know just how many mAh make up the iPhone 7 and 7 Plus’ batteries.

For the iPhone 7, Apple’s packing in a 1960mAh battery. By today’s standards, this is pretty small, but since the company’s new A10 Fusion chipset promises more efficiency, I’d assume you’d get more life out of your phone. This guess is also assisted by the fact that 2015’s iPhone 6s features a 1715mAh battery, a difference of 210mAh. All in all, Apple’s claims of 2 extra hours of battery life are probably on point, however we obviously need to test the phone in real life to be sure.

Regarding the iPhone 7 Plus, Apple’s including a battery cell which weighs in at 2900mAh. this size is more on-par with recent smartphone offerings in the world of flagships. On average, flagship handsets tend to have 3000 – 3500mAh cells packed in, so at least Apple’s closer this time around when compared to last year’s 2750mAh cell in the iPhone 6s Plus. Once again, I think Apple’s estimates of an extra hour of battery life in the new Plus model is probably correct since the difference in size between the 7 Plus and 6s Plus’ batteries is only 150mAh. But of course, only real world testing will tell if that’s true or not.

With the official launch of the iPhone 7 and 7 Plus now just four days away, we’re bound to hear more about their battery sizes and what kind of usage you can get out of them each day. Stay tuned to MBEDDED as we’ll have more coverage on everything iPhone come September 16th!