Today at their event, Apple unveiled to the world the next generation of the Apple Watch. Called the Apple Watch Series, 2, the new Watch features new features to make the device seem more like a fitness partner rather a full-fledge smartwatch which it still tires to be via software. 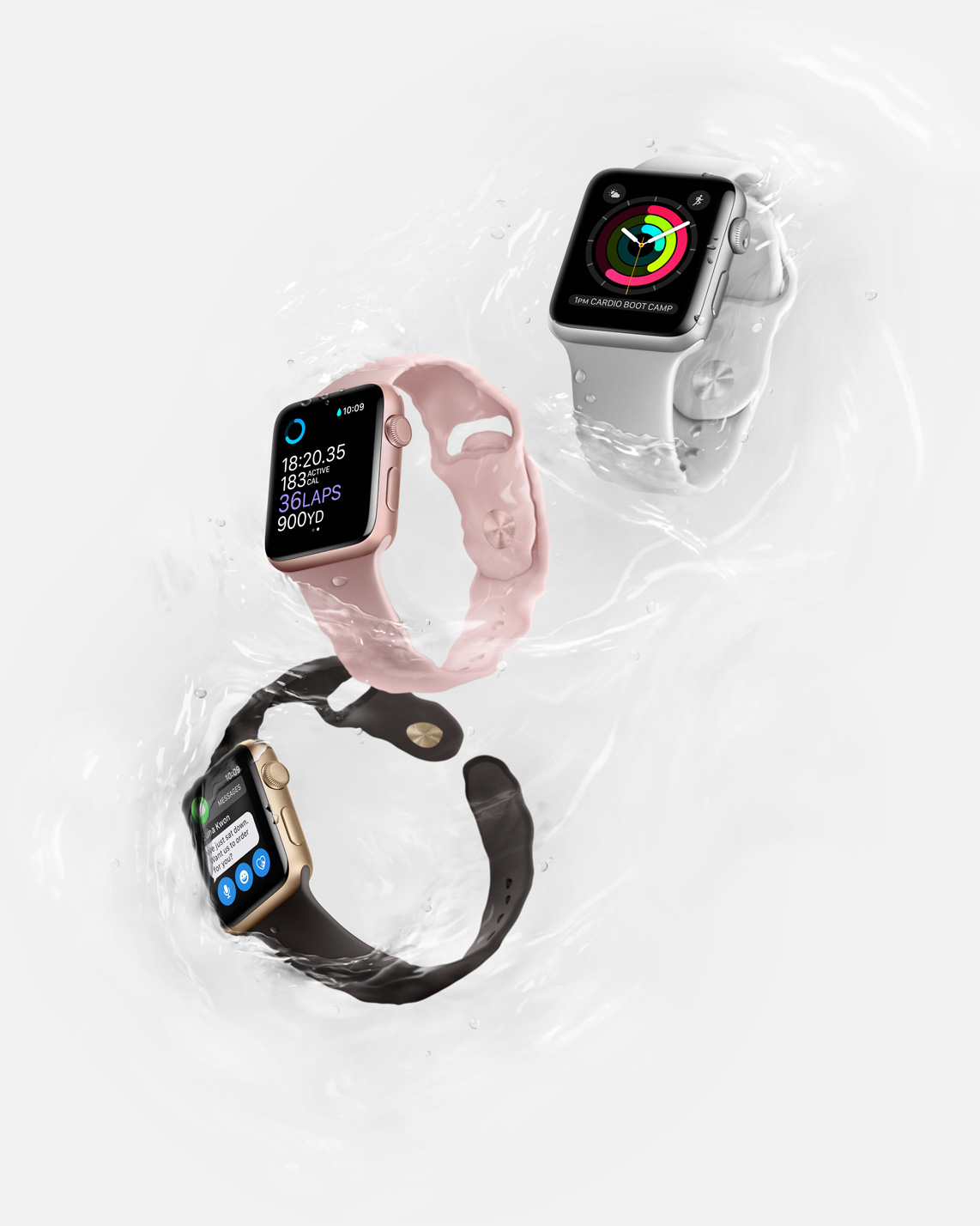 For starters, the design hasn’t change. However, that don’ts go without saying that the design hasn’t been improved. See, Apple decided that the Apple Watch needed to be better in the water, so they designed Series 2 to be swim proof. This means that you can jump in the pool, go in the ocean, or visit anywhere there’s water and not have to worry about drowning your watch. In addition, the speaker on the Watch has been completely been redesigned so when water does get in, the speaker pushes the water out and doesn’t damage any hardware inside. Plus, there’s a couple of new workouts specifically for swimmers and people who like to workout in the water that remain exclusive to Series 2. 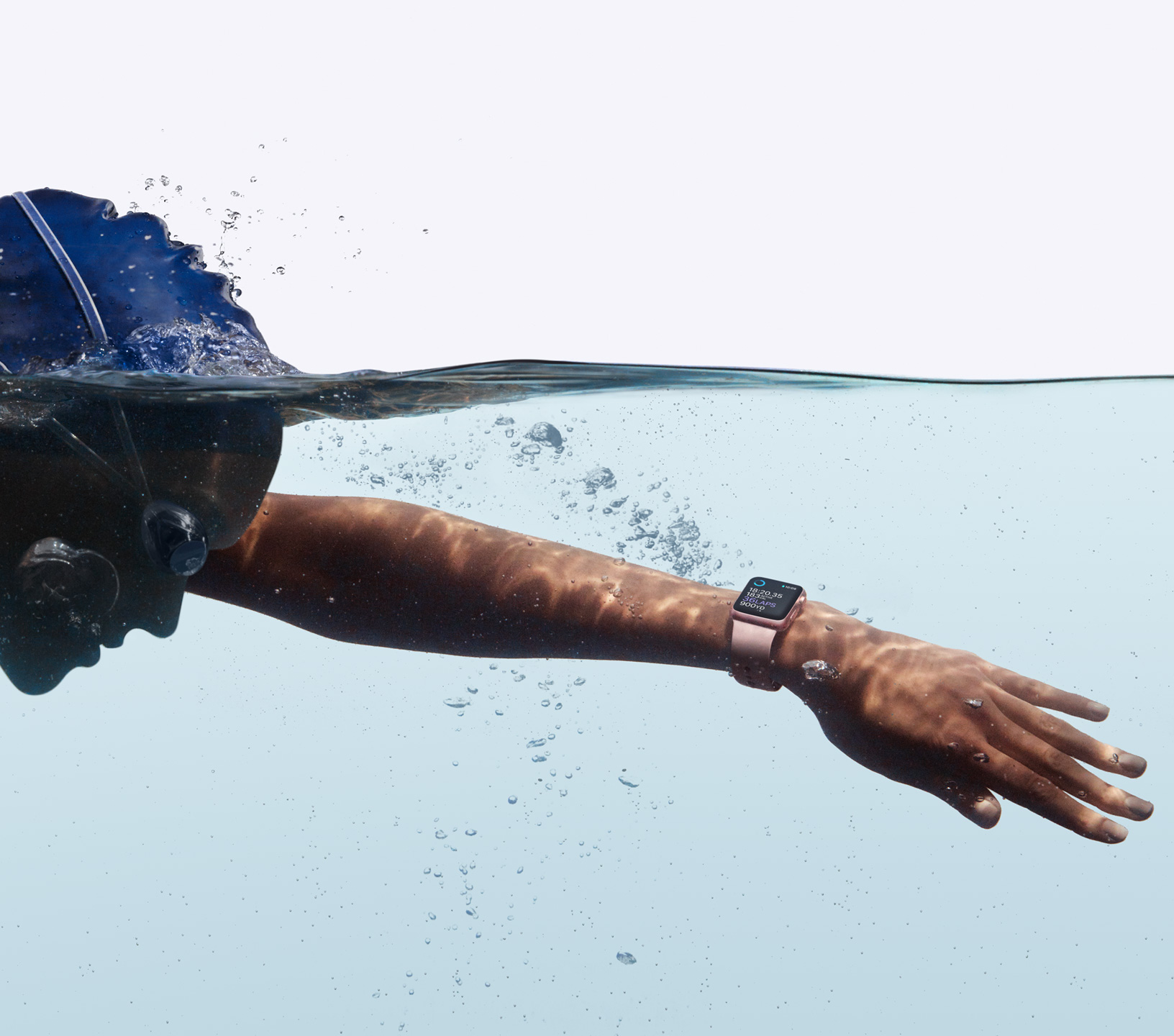 Inside the Apple Watch Series 2, Apple built in the S2 SoC, the successor to the S1 chip found inside the original Apple Watch. This new processor includes a dual-core design which will speed things up significantly. And when it’s paired with the 7x speed increase within watchOS 3, this new Watch should be pretty fast, but of course only real world testing will determine that. 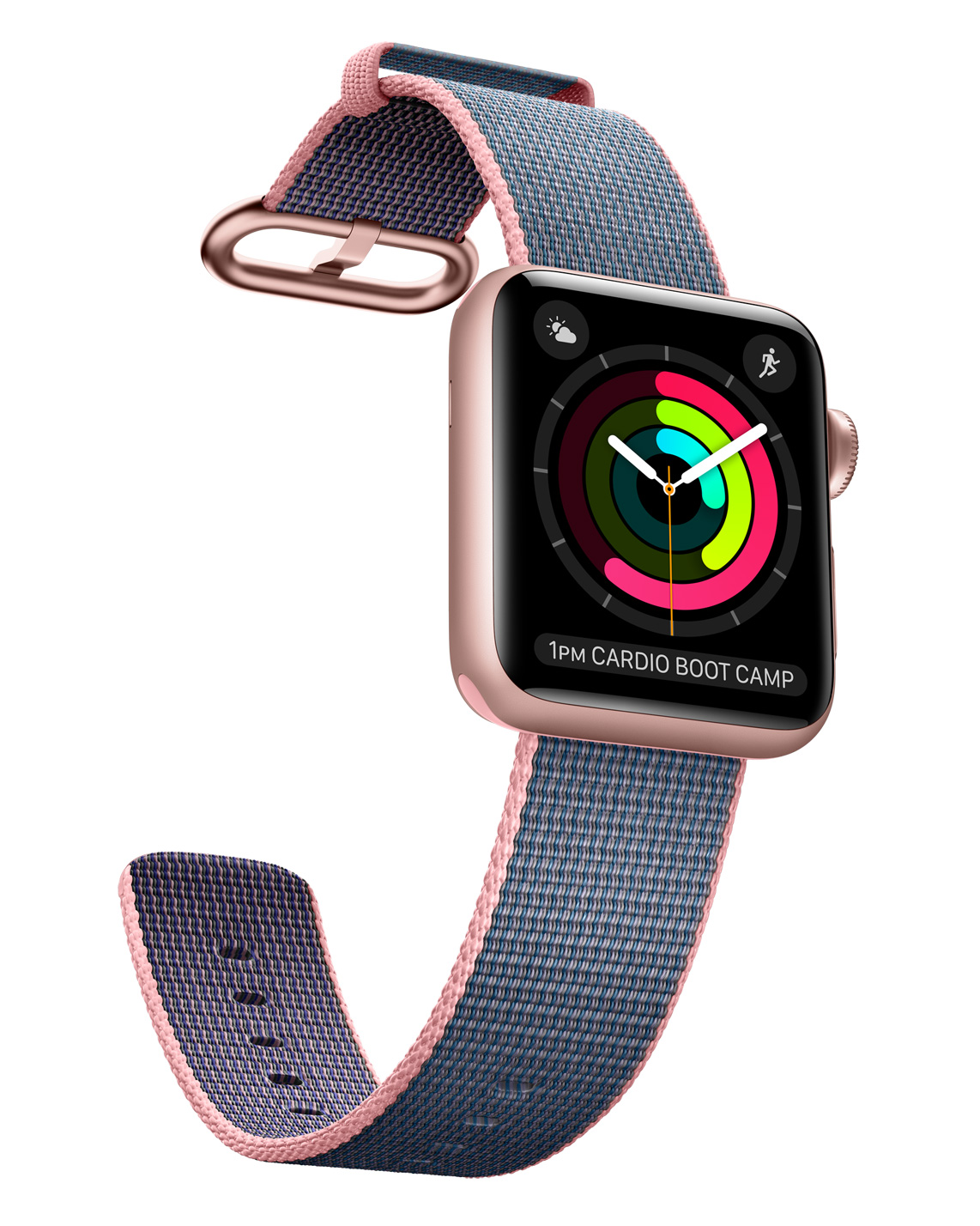 Paired with the S2 is a new GPU which Apple says will give you up to twice as fast graphics performance. Plus, the brightest display Apple ever shipped on a device before is also present on the new Watch. This screen, clocked in at 1000 nits, is more than two times brighter than the original Watch, so it should be easier to see in direct sunlight.

Apple pioneered the custom designed System in Package (SiP) for Apple Watch, and continues to develop this breakthrough technology with the second generation S2 chip. With a dual-core processor, the S2 chip takes performance to a new level, making Apple Watch up to 50 percent faster. In addition, a new GPU has been added, which delivers up to two times greater graphics performance. Apple Watch Series 2 also features a dramatically brighter display — at 1,000 nits, it’s more than two times brighter— making this the brightest display Apple has ever shipped, so it’s even easier to see important information at a glance when outside on a sunny day. 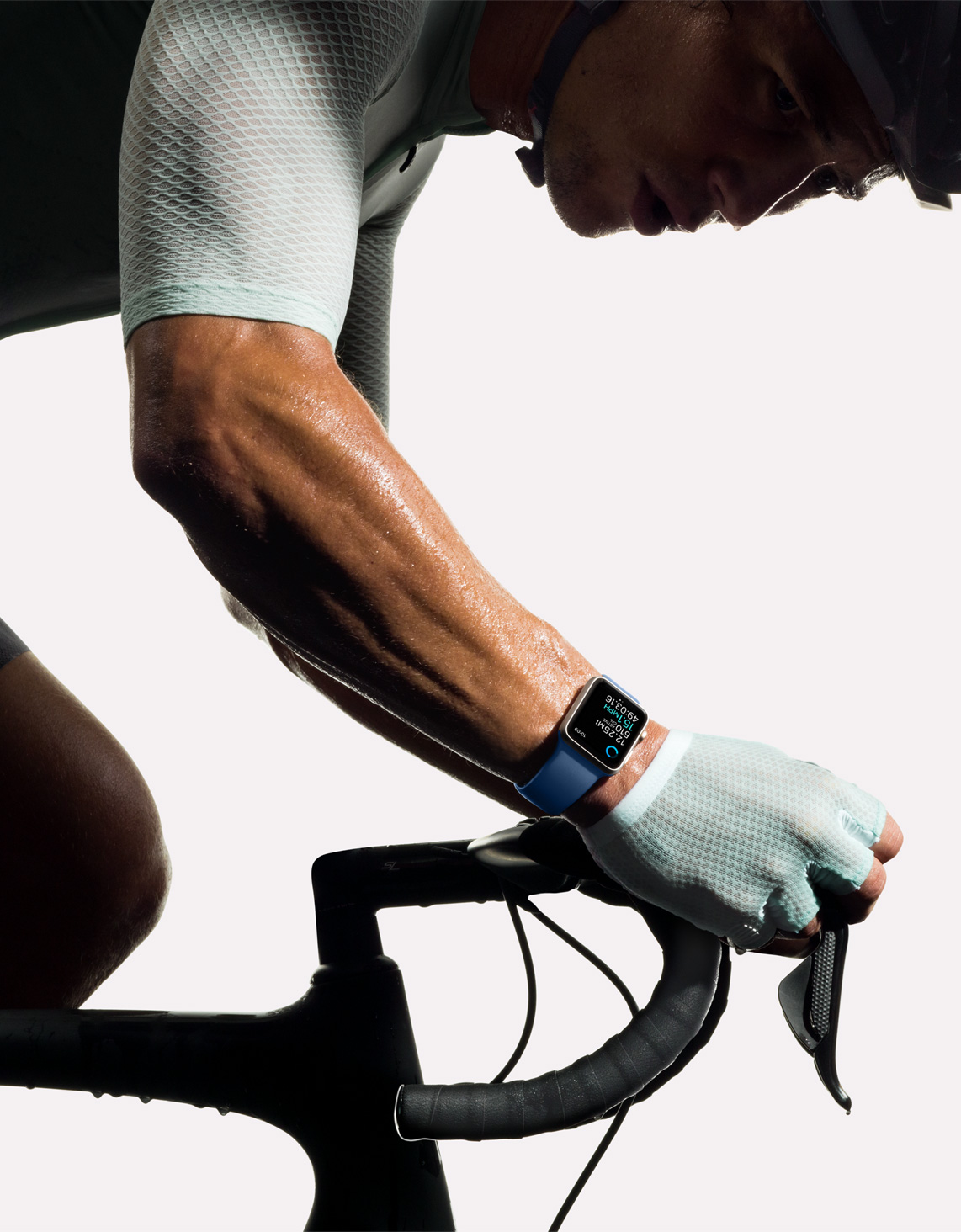 To add onto the fitness features of the Watch Series 2, Apple includes a built-in GPS for workout sessions. This chip will allow you to view precise workout patterns and routes taken during things such as runs, cycling sessions, or walks. Plus, it doesn’t require an internet connection to work, so feel free to leave your iPhone home while you go for your daily run.

As of yet, there’s no word on whether this new Watch features a barometer, however stay tuned as I’m sure that information will surface soon.

Of course, powering the Apple Watch Series 2 is watchOS 3 which includes many different interface tweaks and added features to make using a Watch much easier and quicker.

watchOS 3 features significantly improved performance that makes it even simpler to launch favorite apps instantly, either from the watch face or with the new Dock, which displays the latest information already updated in the background. New fitness and health capabilities include the breakthrough Breathe app, designed to encourage users to take a moment in their day to do deep breathing exercises for relaxation and stress reduction. The Activity app now includes the ability to share, compare and compete, keeping friends and family motivated. There is also a customized experience for wheelchair users to close their Activity rings, in addition to dedicated workouts.

Apple Watch is even more personal with new watch faces including Minnie Mouse, Activity and Numerals. Simply swipe edge-to-edge to swap out a new watch face and with the new Face Gallery in the Apple Watch app on iPhone, it’s even easier to customize watch faces and discover third-party apps.

Accompanying the aluminum and stainless steel Apple Watch Series 2 is a new Apple Watch Edition that doesn’t include 24K gold and doesn’t cost $10,000. This model is made of ceramic and is painted white.which gives it a nice, clean look. It’s apparently “extremely scratch resistant” since this material is proven as one of the strongest in the world. There’s also a model called the Apple Watch Nike Plus that gives the Watch a unique look with a custom silicon band and exclusive software features that’ll motivate you to keep moving. More information on this variant can be found below.

Today, Apple and Nike introduced Apple Watch Nike+, the latest result of a long-standing partnership. Apple Watch Nike+ is the ultimate tool for anyone who runs, pairing exclusive Nike Sport Bands with Apple Watch Series 2, which features GPS, a two-times-brighter display, water resistance 50 meters,* a powerful dual-core processor and watchOS 3. Apple Watch Nike+ also includes exclusive Siri commands and iconic Nike watch faces along with deep integration with the new Nike+ Run Club app for unrivaled motivation to go for a run, coaching plans that adapt to your unique schedule and progress, and guidance from the world’s best coaches and athletes. Apple Watch Nike+ is the ultimate companion for those with a passion for running, whether they’re emerging runners or marathon veterans.

“Apple Watch is the ultimate device for a healthy life and we wanted to push it further to create the best smartwatch in the world for runners and athletes,” said Jeff Williams, Apple’s chief operating officer. “Apple Watch Nike+ takes performance tracking to a whole new level and we can’t wait to bring it to the world’s largest community of runners.”

“We know runners — and we know many are looking for a device that gives them an easy, fun way to start running,” said Trevor Edwards, president of the Nike Brand. “The market is full of complex, hard-to-read devices that focus on your data. This focuses on your life. It’s a powerful device with a simple solution — your perfect running partner.”

Apple Watch Nike+, like all Apple Watch Series 2 models, features built-in GPS to track pace, distance and route, so users can run without an iPhone. With the brightest display Apple has ever made, metrics are easy to read, no matter the sun’s glare, and if users decide to take a post-run dip in the pool, Apple Watch Nike+ is water resistant 50 meters, for swimming.

The Nike Sport band is crafted from the same strong, flexible fluoroelastomer as the original Apple Watch Sport Band, but now it’s perforated for even better ventilation and sweat management. The lightweight band is available in four vibrant, two-tone color combinations that are unique to the collection. Apple Watch Nike+ features two exclusive watch faces inspired by Nike’s iconic style that can be easily personalized with useful apps like Activity Rings, Heart Rate, Stopwatch and Weather, helping runners stay informed at a glance.

Apple Watch Nike+ takes advantage of the unique capabilities of Apple Watch Series 2 and the Nike+ Run Club app to be the perfect running partner on your wrist. The app experience is seamlessly built into Apple Watch Nike+ and easily accessed right from the watch face, so users can get going with a quick tap. The Nike+ Run Club app offers daily motivation through smart run reminders, challenges from friends and even alerts informing when the weather is right to get outside. Training data, including pace, distance and heart rate are available at a glance, and through shared run summaries, the app promotes friendly competition, even allowing users to send fist bumps to each other right from the wrist.

In addition, Apple also updated their custom Hermés collection with new bands and clock faces. Once gain, you can find more info below.

“Ours is a partnership born of parallel thinking and mutual regard — we share similar preoccupations, ever evolving and refining our design,” said Jonathan Ive, Apple’s chief design officer.

“We are united by the same vision, the uncompromising pursuit of excellence and authenticity, and the creation of objects that remain as relevant and functional as they are beautiful. This is a new step of our attelage,” said Pierre-Alexis Dumas, Hermès’ executive vice president, in charge of artistic direction.

The expanded Apple Watch Hermès collection includes a new style — the Double Buckle Cuff in Swift and Epsom calfskin leathers, inspired by an archetypal Hermès sandal design by Pierre Hardy, creative director of Hermès shoes and jewelry, elegantly framing the wrist in new colors including Rose Jaipur, Étoupe and Bleu Agate. The new Single Tour Deployment Buckle band is a reimagined take on a classic form, pairing the elemental simplicity of Hermès Barenia calfskin leather with the modernity of an Hermès hidden deployment buckle, which opens with a click of two side buttons. The classic Double Tour and Single Tour styles continue for fall in refreshed colors including Anemone.

All in all, the new Apple Watch Series 2 seems to be a pretty decent upgrade over the original Watch, even though Apple did in fact update that Watch as well.

Yes, you read correctly. In addition to the Series 2 announcement, Apple also announced that they’re updating the original Watch with the same S2 chip and new GPU found in the new Watch. They’re calling the original Series 1 and will sell it starting at $269.

Pricing for the Apple Watch Series 2 starts at $369, and the same goes for the Nike Plus edition. For the new Edition, $1249 is the starting price which, while is pretty steep for an accessory, isn’t nearly as bad as charging $10,000. Just sayin’…

Full pricing and availability can be found below for the new Series 2, the Nike Plus, and the new Hermés models.