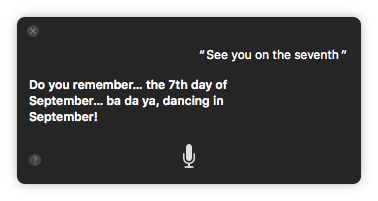 Every year right before one of their events, Apple tends to load Siri, their personal voice assistant, up with Easter eggs based on the next keynote’s invitation. Since this year’s September event has the tagline, “See you on the 7th”, I thought it’d be appropriate to tell the assistant the very same sentence and see what would happen. After doing so a few times, here’s what I got back.

As you can see, a total of 5 different responses seem to be active when you tell Siri, “See you on the seventh”. And what it looks like is the voice assistant’s pretending to be a bit oblivious to Apple’s September event. Of course, there’s a couple of results above that appear to tell you to be sure to watch the keynote next Wednesday, however a majority of them seem to give off the impression that Siri doesn’t know what’s going on, while secretly she probably does.

I got these results on iOS 9 via an iPhone 6s. When I told Siri this sentence on macOS Sierra, I got a slightly different experience with one more response I found rather enjoyable.

Obviously, a majority of the answers I received were the same ones found on iOS 9, however the first answer seems to be pretty new. I haven’t received that response as of yet on iOS, however I expect it to reach that platform very soon.

Of course, as we draw closer and closer to the September 7th date, Apple will no doubt add even more Easter eggs to Siri we can check out. We’ll update this article if we find anymore.

If you told Siri, “See you on the 7th” and you got a different response from the ones listed above, feel free to take a screenshot and send it to us at mbedded@icloud.com. You can also tweet the picture to us @MBEDDEDMaximum and be sure to mention me as well @LegendaryScoop so I’ll be sure to notice it.

An email tipster sent us a screenshot of this additional Siri response when you say, “See you on the seventh”.