A company called Turing has begun sending out an announcement newsletter which has essentially unveiled a device within the company’s The Outer Blueprint project, a program which aims to get artificial intelligence inside smartphones. The smartphone, called the Turing Phone Cadenze, has a pretty crazy name, but features even crazier specifications.

For starters, there’s a 5.8-inch QHD display. Not too special, right? Right. We see this kind of screen almost every day. But digging deeper, you may wanna hold on to your jaw when it drops. 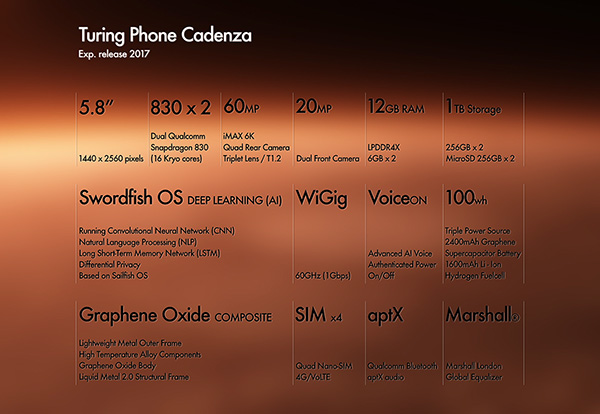 Inside the Phone Cadenze, you’re getting two – yes, two – Snapdragon 830 processors (no, you didn’t miss anything, by the way. The 830 hasn’t even been announced yet), an absolutely staggering 12GB of LPDDR4X RAM, 512GB of on-board storage which is expandable via two microSD card slots to add another 512GB (totaling 1TB of space, which is crazy), three 2400mAh batteries (somehow) which adds up to 7200mAh, and four SIM card slots which can all be used at once. Already, these kinds of specs seem unreal, but wait till you hear about the camera… 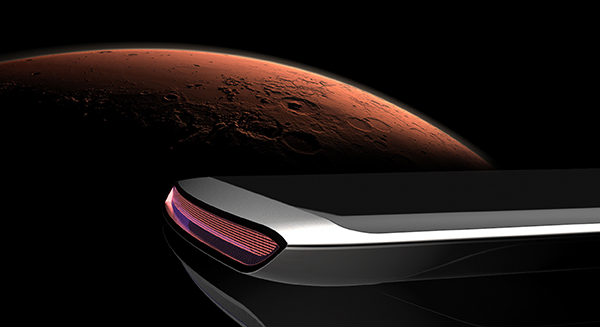 Turing found it appropriate to build in a 60MP “iMAX 6K Quad Rear Camera, Triplet Lens/T1.2”. While we’re not sure what all that stuff means, we do know that this camera should be pretty good at least. For selfies, there’s a 20MP dual camera system on the front which should also create some stellar images.

Running on all this hardware is something called Swordfish OS which is apparently based on Sailfish and use deep AI learning capabilities to make the user’s experience more personal and simple. We couldn’t tell you what those capabilities within the OS are as this information isn’t provided, however in theory, they should be pretty cool if all this work was put into building this software.

Liquid metal is used to build a vast majority of the Turing Phone Cadenze, while glass is (obviously) used to cover the display. At this time, not much more information is provided by Turing, but do we need more to determine whether this phone’ll be epic or not?

You may think we’re pranking you or just wishing that this phone were real, however we can assure you that we’re not and this phone is indeed for real. You can read Turing’s full newsletter below alongside view the whole email (links and all) here.

Oh, and one more thing. We don’t know how much this thing’ll cost, however we’ll let you know when we do. My guess is somewhere in the thousands (USD wise), but that’s just me. Turing says they hope to have the device out next year, so we don’t have much more time to wait.