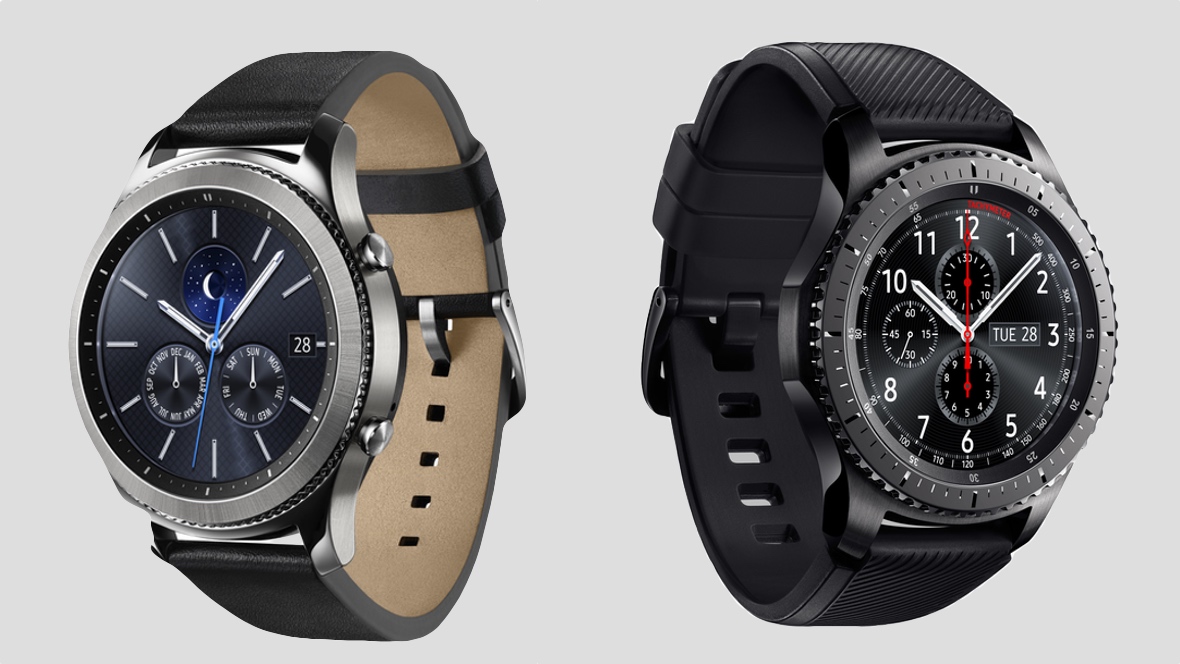 Today at IFA 2016 like many other products, Samsung unveiled their latest smartwatch called the Gear S3. This wearable proceeds last year’s Gear S2 and classes things up from the design and materials used to the interchangeable bands you can buy…

Notably, Samsung has two models of the Gear S3 available – one’s called the Gear S3 Frontier, while the other’s the Gear S3 Classic. The former features a rather sporty look while also remaining a tad casual for everyday use, while the latter really classes things up by resembling a well-built stainless steel watch you’d find at a jewelry store or your local Belk (if you know what I mean). But while each look very different at every angle, they do share the same band interchangeability which allows you to swap out your current band for a new 22mm one or one you just happen to like. This is similar to the way Apple lets users swap their bands on the Apple Watch, while the same feature can also be found on the recently announced ZenWatch 3.

Front and center is a 1.3-inch AMOLED circular display that features a resolution of 360 x 360, resulting in a pixel density of 278ppi. Covering the display is Corning’s recently announced Gorilla Glass SR+ which, Samsung says, won’t result in attracting many fingerprints whatsoever. To make checking the time and date a bit easier and quicker, Samsung has built-in a full-color Always On Display that’ll show you the two pieces of information listed which will never fade away and look like a traditional watch. This feature is editable and can be changed to fit whatever personality you want. The Korean giant seems to be really promoting this feature, so let’s hope it’s as good as it sounds.

Taken from last year’s Gear S2 is an upgraded version of the rotating bezel IO. If you recall, rather constantly tapping on the display, you can simply navigate your way through the Gear S2 using simple circle gestures on the bezel of the smartwatch, making content more immersive and less obstructive. But rather making it touch sensitive like the Click Wheel on an iPod, Samsung decided to make an actual rotating bezel for the Gear S3 which will physically move if you take action on it. Whether this is a better idea than the touch-sensitive one found on last year’s Gear is beyond me, so I’ll have to try it out in person to really get a feel for it.

To really upgrade the bezel on the Gear S3, you can now answer or decline phone calls depending on which way you turn it. This also works with notifications to find out who’s contacting you. I think I’d find this feature very useful, so I’m looking forward to trying it out.

After those 462 introductory words, you’re probably wondering by now, “Okay, Max, what’s the specs of this thing already?!” This year’s Gear S3 duo features a 46mm body that’ll likely be too big for some wrists, a 1.0GHz dual-core processor (for now unnamed), a weird 768MB of RAM, 4GB of storage, a nice and big 380mAh battery, wireless charging, Bluetooth 4.2, an Accelerometer, Gyro, Barometer, Heart Rate Monitor, and Ambient light sensor, and compatibility with Android phones running 4.4 or above. And eventually, they’ll work with iPhones, but it’s unknown when that time will come.

It’s worth noting that the only Gear S3 model that’s receiving LTE capabilities is the Frontier, so the Classic will obviously cost less and be the more affordable option. However, 802.11 b/g/n Wi-Fi, NFC for use with Samsung Pay, GPS capabilities, and MST will all work with both variants.

To power all this hardware, Samsung is building in a new version of their Tizen smartwatch OS. This update brings tweaks, improvements, and new features to the Gear family, while different app partners will be featuring their software on the watches as compatible. For instance, you’ll now be able to use a full-fledged Spotify app right on your wrist to listen to music, while an app for your Nest thermostat will also arrive soon. Users of the Gear S2 lineup won’t be left out in the cold, by the way, as Samsung has announced that this new software will hit those devices as well.

All of these facts about the new Gear S3 lead right up to pricing and availability (obviously). Unfortunately, this information isn’t know at this time as carriers (AT&T, T-Mobile and Verizon) will announce their own pricing, however Samsung does say that retailers such as Best Buy, Amazon, Macy’s and Samsung.com will all sell the devices. We’ll let you know when more details about the Gear S3 surface, so stay tuned!