To follow up on the recently launched Moto Z and Z Force, Lenovo has announced at IFA 2016 the Moto Z Play, a cheaper variant of the flagship Moto devices for 2016. This smartphone features a very similar build to the Z, however adds a few much-needed improvements and a pretty shocking upgrade…

For starters, the design of the Z Play is exactly like the Z and Z Force. The only noticeable differences are a) the back is made of glass instead of metal, b) the device is thicker (but for good reason), and c) there’s a headphone jack on the bottom. This is something entirely missing from the Z and Z Force which causes frustration from users (including me) since not everyone has wireless headphones or don’t wanna use the included USB-C adapter to 3.5mm jack dongle. I know for sure I’d love a headphone jack on the standard Z, but at least we’ve got something similar for the time being, even if that means having to switch to an entirely different device.

Other than those subtle changes, not much else is different between the Z and Z Play. The 5.5-inch display on the standard Z is present on the Play model, even though it’s downgraded to a 1080p resolution. This gives the device a nearly identical form factor in terms of height and width. And while the Play is thicker than the standard Z, it’s worth noting that it’s because a much larger 3,510mAh battery is loaded in. This paired with a 1080 display will surely get you through at least a full day of pretty heavy use or even two days if you use your phone a bit lighter. in fact, Moto touts that this cell can get you through 50 hours of use. Guess we’ll have to test that, huh?

One of the downgrades between the Moto Z and Z Play is in the processor department. Within the standard Z, you’ll find a Snapdragon 820. Within the Play, however, there’s a Snapdragon 625. This is a mid-range chipset, however its clocked at 2GHz and features eight cores, so you should get pretty good performance out of it nonetheless.

Another downgrade is found in the RAM count of the Z Play. In this handset, there’s 3GB available for multitasking, while the standard Z features 4GB. You probably won’t notice a giant difference in speed and RAM management between the two devices, however there may be a slight slow down or hiccup here and there because of it.

A pretty unexpected upgrade between the Z and Z Play regards the camera. On the back of the standard Z is a 13MP camera, while on the back of the Z Play there’s a 16MP camera. Why this is so is beyond me, however megapixels in a camera don’t mean everything. But with that in mind, you should be able to take pictures with more light and detail with the Play over the standard Z. Of course, only real-world testing will tell whether this is true or not, so stay tuned. 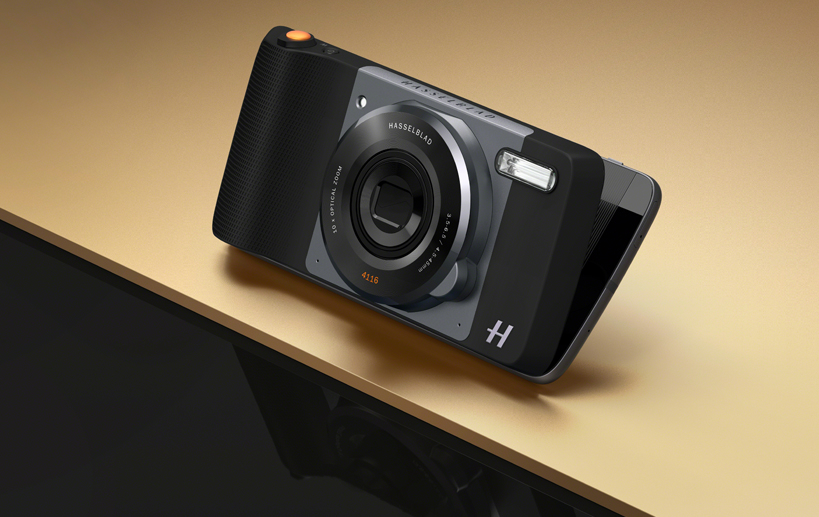 Speaking of cameras, to accompany the unveiling of the Moto Z Play, Lenovo also announced a new Moto Mod which is compatible with all three Moto Z handsets. Called the Hasselbland True Zoom, this Mod snaps to the back of the devices and features a 12MP camera for taking much better pictures and videos than the stock cameras on the devices listed. Shooting in RAW is possible with this Mod, while full access to Hasselbland’s editing software is also included when you pick up the Mod. There’s also a few surprises in store when you use this camera attachment, so the below snippet of Moto’s press release is definitely worth a read.

Add advanced imaging capabilities to your phone in a snap! You can create and share like never before. Featuring 10x Optical Zoom and a Xenon flash, you just focus on getting the shot – lighting and distance will never stand in the way of capturing the perfect image.
Expect even more control and flexibility with the ability to shoot in RAW format. Plus, physical shutter and zoom controls, guaranteeing a great handling experience. Added bonus? You’ll also get free access to Hasselblad’s Phocus software for streamlined editing control and the highest quality output.
Last, but not least, share your beautiful results with family and friends while still in the moment with automatic backup and unlimited free storage at original quality for two years with Google Photos.

The Moto Z Play will be available globally starting in September. One month later in October, the Moto Z, Z Force, and Z Play will all be available for purchase unlocked. If you like DROIDs, you’re in luck, because Verizon will begin carrying the Z Play as the Moto Z Play DROID starting September 8th for $408 ($17/month). Unlocked, the Z Play will cost $449.99, while the standard Z will start at $699.99. For the Hasselbland True Zoom, you’ll pay $249.99 at Verizon and $299.99 at Motorola.com (for some odd reason) starting September 15th.